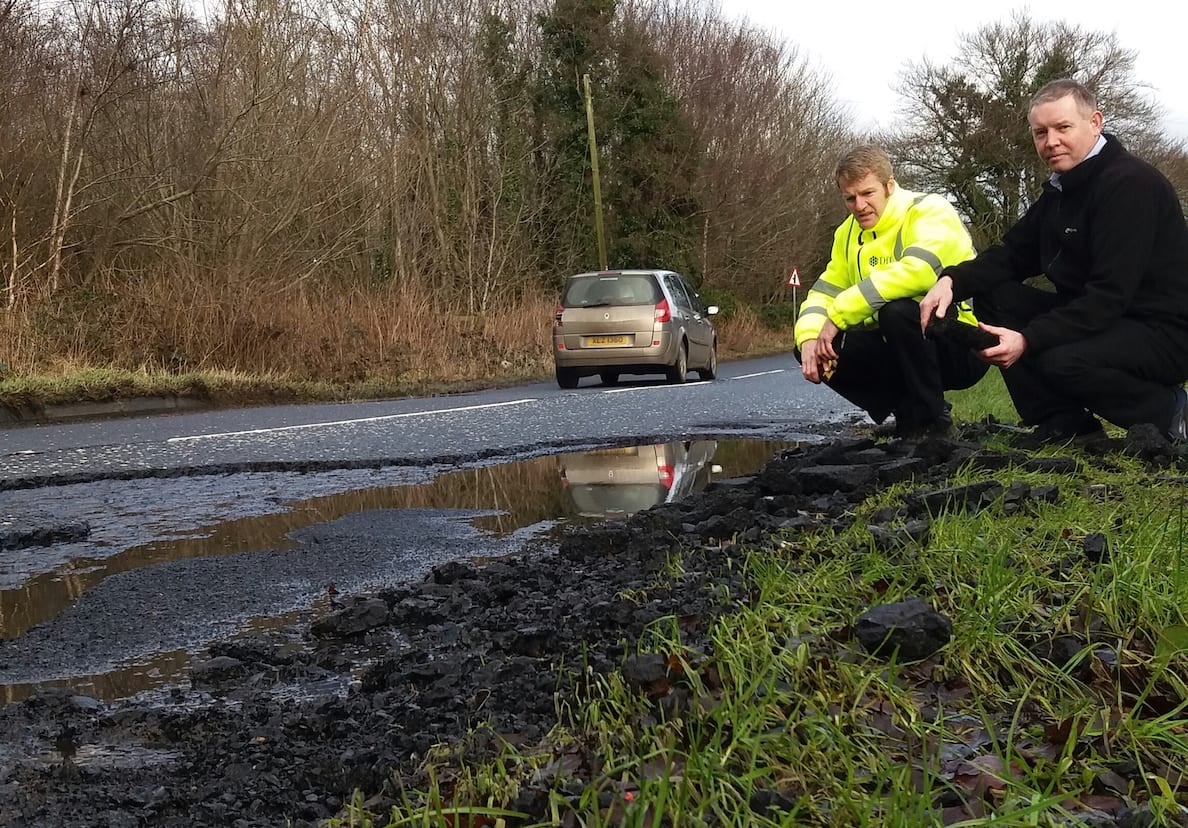 Concerns have been raised that potholes in some parts of south Armagh are on the verge of becoming trenches.

While realising the problem is not just a local issue, Sinn Fein councillor Mickey Larkin says some of the roads in the Jonesborough and Dromintee areas are treacherous.

“My first concern is for the safety and well being of the citizens of the area I represent and of those who reside within our district,” explained councillor Larkin.

“We viewed potholes which were on the verge of becoming trenches and photographed all defects along our roads.

“Every pothole and drainage issue has been recorded and reported to the Department. This is the first stage of the process to ensure all defects are repaired.

“One of the most pressing defects occurred outside Meigh on the Dromintee Road close to the junction with the Aghadavoyle Road.

“In mid-December the road surface was stripped back after a hard frost. My colleague Megan Fearon MLA reported this the following day to the department with photographs attached. I also reported this at the time.

“This stretch of road has the national speed limit along it. Drivers were swerving to avoid the crumbling road surface and this was presenting a danger to oncoming traffic.

“With the Christmas break looming, the urgency of the matter was obvious, however, the Department failed to act.

“Following the extreme weather at New Year, myself and others, again contacted the Department to express concerns as the problem worsened.

“I am aware that the engineer issued a work card for the repair at this time however it was never carried out.

“With this knowledge I contacted the engineer directly and requested a site meeting. On visiting the site we measured a defect which covered an area of 7×2 metres. The engineer was shocked that the repairs hadn’t been carried out as per the work card.”

The Sinn Féin representative concluded: “Following the site visits in the area I secured a commitment from the engineer that the defect at the Dromintee Road would be tended to immediately.

“True to his word, two days later staff from the Department arrived and repaired the road. The community is thankful for this work being carried out however much more needs to be done and quickly before serious injury is caused to road users.

“I will continue to lobby and cajole to ensure our roads are repaired within the tightest timeframe possible. Anyone who knows of a defect can contact me to report it and I will log the defect and chase the Department on it.”

“In the last couple of weeks in particular I have been inundated with requests for potholes to be fixed and people commenting on the gradual deterioration of roads.

“The Budgetary Outlook presents a depressing picture for road users particularly in the already crumbling roads of rural south Armagh.”

He added: “Earlier this week it was revealed that the Department of Infrastructure are now operating a reduced maintenance service.

“What this means in practice for road users is that the depth for repairing potholes on roads with a lower traffic flow has doubled to four inches.

“That means cars will have to navigate ankle deep craters before anything is done about it. The Budgetary Outlook will only compound this problem further which has proposed cuts for every year until 2020 which spells disaster for south Armagh roads.

“People are angry and rightly so, it is absolutely ludicrous for the Department of Infrastructure to encourage road users to adjust the way they drive to take into account the poor condition of roads.

“I would of course always encourage road users to drive safely, but tell that to the Ambulance Service who already find it difficult to reach areas of south Armagh in an emergency.

“People in this region deserve basic infrastructure which is adequately maintained.”

He continued: “This is why I called for any proposed cuts to future budgets to be rural proofed at last week’s meeting of the Strategic, Policy and Resource Committee.

“I have said many times before that I will continue to challenge inequality wherever it exists and for too long rural communities in South Armagh have fallen through the cracks.

“We are also expecting Roads NI to address our next meeting of the Slieve Gullion DEA where I will continue to address the concerns of local people.”

Meanwhile Sinn Fein councillor Terry Hearty has said that whilst news from the Department of Infrastructure that the first stage of the resurfacing scheme on the A37 Concession Road Cullaville is due to begin in April, is positive, he believes that the road is in that bad of a condition, the work should commence immediately,

“There has been a huge outcry from local residents, motorists and pedestrians about the state of the Concession Road,” said councillor Hearty.

“Myself and my south Armagh colleague MLA Megan Fearon recently had Road Service Officials from the Department of Infrastructure (DFI) out on site to see for themselves the condition of the road.

“The most recent update from the senior Roads Section Engineer informs me that subject to receipt of the resurfacing budget in the new financial year, it is proposed to commence the first stage of this resurfacing scheme from Loughross Road to the 40mph signs at the village limit in April 2018.

“The Roads Service Officer also stated that despite reports in the local press, he was at present not aware of recent additional allocated funding for resurfacing

“I believe that the resurfacing work on this road should begin immediately and also that the road is resurfaced from Culloville to Ballinacarry Bridge as the whole needs worked on.

“There is little point in doing a piecemeal job. Megan Fearon MLA has requested a meeting with senior Roads Service Officers and we will both push to get this essential work done.”