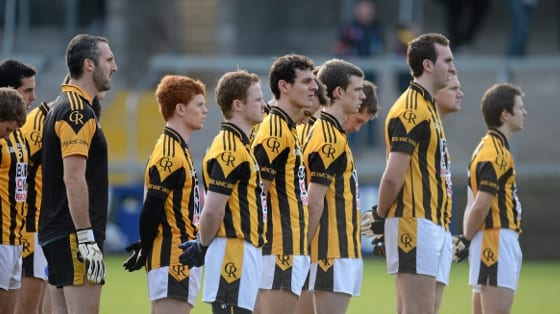 Crossmaglen Rangers claimed their 43rd county championship with yet another one-sided destruction of Armagh Harps at the Athletic Grounds on Sunday.

Tony McEntee’s side has now won six titles on the bounce – 19 in 20 years.

And Armagh Harps were on the end of a second successive county final drubbing; this year actually one point worse off than last year’s meek offering.

It’s the question that keeps cropping up every year in Armagh: can Crossmaglen be beat? At the moment the simple answer is no!

It wasn’t so much a poor Harps performance – although they were awful – but rather a clinical, excellent display from the south Armagh men.

Michael McNamee and David McKenna were particularly effective while Tony Kernan was gifted the space to pull the strings all afternoon.

Mark McConville and Ryan McShane were the only Harps players that will come out of the game with any credit – the former surely in line for a county call-up in the near future.

The game started at a tentative pace and it was almost a surprise Cross’ didn’t start a county final with their customary goal – it was to come though.

Harps opened the scoring through Gareth Swift who tapped over a free two minutes in.

It wasn’t a sign of things to come however as the reigning champions soon found their rhythm when Tony Kernan slotted over a free from 45 yards.

And Cross’ took the lead on seven minutes with an excellently worked point, which started from a Paul Hearty kickout and finished with Paul Hughes knocking over from 21 yards.

Hughes added another three minutes later before Johnny Hanratty opened up his account with a beautifully taken point with the outside of the right.

David McKenna capitalised on a Harps mistake to make it 0-5 to 0-1 midway through the opening half.

Martin Aherne and Michael McNamee added another two before the Harps knew they were in a game.

Ultan Lennon then scored his first point following the hard work of Ryan McShane who drove at the Cross defence all the way from his own half.

Lennon then chalked another on his tally when Aidan Rushe loosely fisted the ball into his path.

Swift then made it three on the bounce with a free after he was he was dragged down 30 yards from goal.

McNamee and Kernan added two more for the champions from the dead ball before a Rico Kelly goal killed off any challenge three minutes before the break. A long ball in was completely misjudged by the Harps full-back which left Kelly bearing down on goal. He was even afforded a fumble before lifting the net beyond the hapless Patrick Morrsion.

Rico Kelly added to put 15 points between the side.

Swift pulled one back with a free on 47 minutes but Kernan and McNamee both scored within a minute of each other.

Karl Loughran managed to tag another consolation before Aherne, McNamee, Kernan and Carragher all ran riot in a game that became a mere training session in the final moments.

The impressive Ryan McShane did however have the final word in this truly forgettable county final with a point of his own.

Rangers ‘keeper Paul Hearty has 19 county titles to his name but this was his first as captain as he lifted aloft the Gerry Fagan cup.