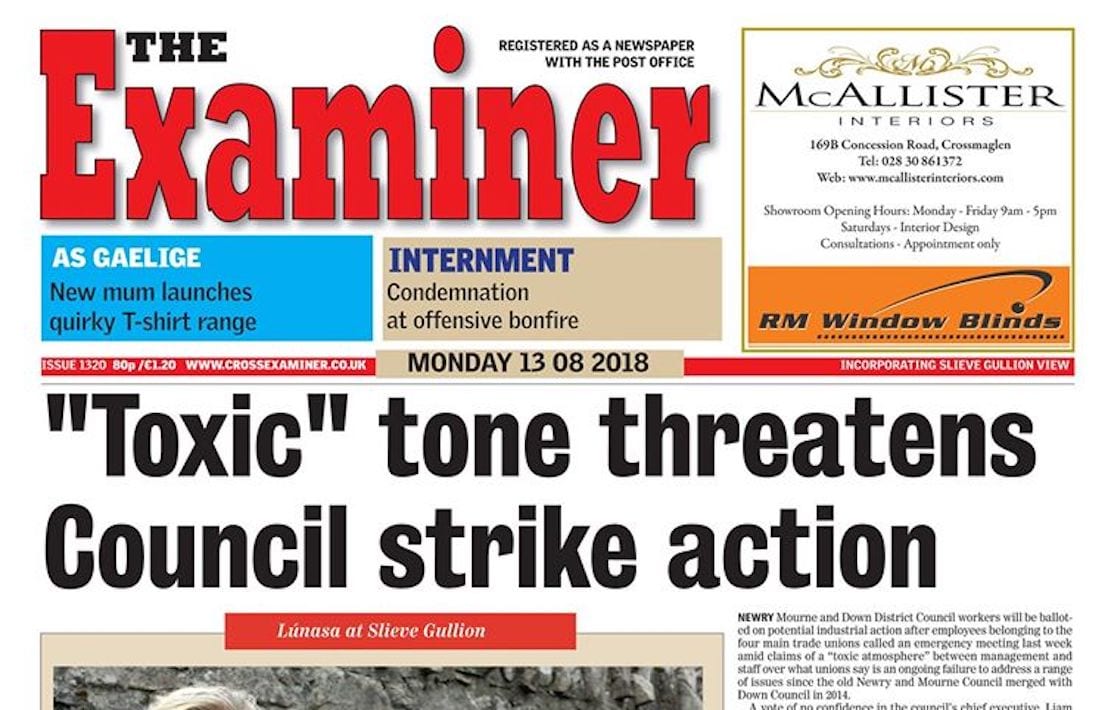 A Co. Armagh has put the presses on hold and ceased production of its newspaper because of the ongoing coronavirus pandemic.

The Examiner, which is based in Crossmaglen and covers the south Armagh area, announced the news on Wednesday.

“It is with deep regret that, due to the continuing coronavirus pandemic, we announce The Examiner is temporarily suspending production to help safeguard our staff, printing and distribution network from this rapidly spreading virus,” a statement from the paper read.

“Our intention is to resume production when it is safe to do so.

“We take this opportunity to thank you all for your support and look forward to continuing to serve our community when we get through this crisis.

“In the meantime, we urge you to stay safe and adhere to the government lockdown directive to stay in your home and travel only when absolutely necessary. Gerry, Elizabeth, Joanne, Jospehine and staff at the Examiner.”

The Examiner is not the first newspaper to face difficulties, with local news taking a huge hit because of Covid-19.

More than 100 journalists and commercial staff were told they were at risk of losing their jobs after Ireland’s largest local newspaper group – Iconic Newspapers – told workers they are to be laid off for six weeks.

The company has 20 newspapers including the Limerick Leader, Leinster Leader, Kilkenny People and Longford Leader.

Meanwhile, JPI Media, which owns dozens of titles in the UK and Ireland told staff on Wednesday that all of its free newspapers delivered door-to-door would temporarily stop printing due to the logistical challenges of arranging delivery, alongside the collapse in the local advertising market.

Newsquest, another of the UK’s biggest local newspaper groups, told its staff they would all be having an immediate pay cut.