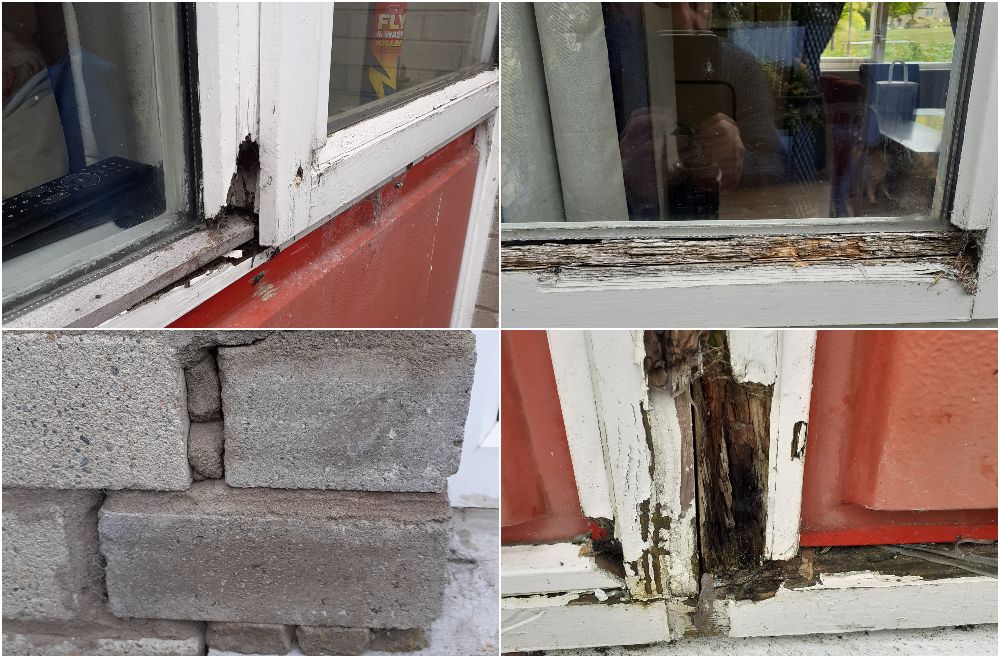 Residents of a Craigavon housing estate are calling for action from the Northern Ireland Housing Executive.

People living in Burnside were expecting to have rotting windows replaced at the end of this month – a job they claim was first promised six years ago.

However, just this week they were told that the work will not take place until the autumn.

David Cross, who has lived in Burnside for around 40 years, said the windows of his house and others in the estate are in a sorry state.

“They are rotting and falling apart. They are full of dry rot, you can put your finger through them,” he said.

“It’s so bad that the curtains blow about on a windy day. We are afraid to clean the windows as well, in case they fall out.

“There’s a woman in her 90s living in one of them and a woman in her 70s who is blind. The damp has started to come into the top rooms and it’s impossible to keep heating in the house.”

He added: We have been told by the NIHE for the last six or seven years that we will be getting new windows in, spring, summer, autumn.

“We got a call a few weeks ago from the contractor stating they will be starting the end of May, but now we have been told it’ won’t be until the autumn.

“There are only about nine houses left here and nobody wants to move. We have a lot of older people living here and we all get on well.”

One of his sisters also lives in Burnside. She said the Housing Executive “keep moving the goal posts”.

“I have been told by a manager that we are a priority, yet we seem to be put on the backburner,” she said.

“They have come out to measure the windows four or five times but nothing ever happens. In the winter I have to put Cling Film up to stop the draughts.

“We can’t face going into another winter with the windows the way they are.”

Back in 2018, then MLA Doug Beattie, now the new Ulster Unionist leader, described the area as one of the most deprived in Upper Bann, and called for action.

Speaking to Armagh I today, SDLP councillor for the area Thomas Larkham said the people of Burnside and Legahory have been “forgotten about for many years”.

“The residents are ratepayers and they are entitled to the same work that is going on elsewhere. They are a close-knit community who all pull together but they have been completely forgotten about by a range of statutory agencies.”

A spokesperson for the Housing Executive said: “We apologise for the delay to the window replacement scheme in Burnside.

“The delay is due to a combination of the impact of the pandemic, including government guidelines on safe working practices to protect tenants and workers, along with contractual issues and more recently, supply issues.

“We are working hard to re-programme scheme works with our contractors, to ensure that a window scheme commences before the end of the current year.”