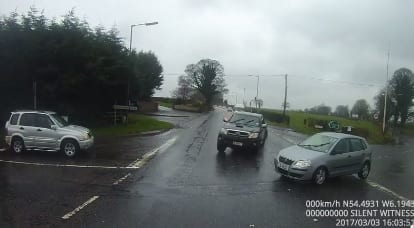 This is the shocking moment a driver carrying heavy machinery narrowly avoids a lorry.

The dashcam footage taken from the lorry and uploaded onto Facebook by MST Transports shows an ‘R’ driver manoeuvre out onto the in the face on oncoming traffic.

The driver of a pick-up, coming in the opposite direction, has no other option but to swerve late, narrowly missing the offending vehicle and the stationery lorry on the opposite side of the road.

This is the moment a motorist was forced to swerve to avoid another driver in a horrifying near miss.

The footage, captured on dashcam by a lorry driver for MST Transport, shows the ‘R’ driver pull out of a junction into the path of oncoming traffic.

The near miss happened on the Lisburn Road from Moira roundabout at the Trummery crossroads on Friday, March 3, around 4pm.