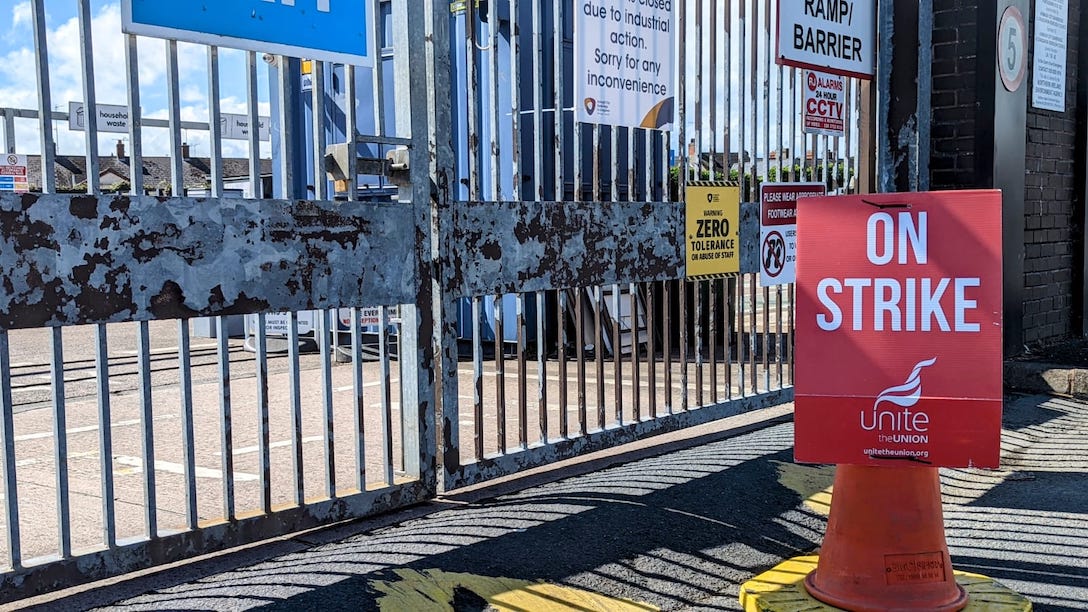 A demonstration is to be held outside council offices in Craigavon on Monday in protest at the continuing strike stalemate.

It has been called by trade unions Unite, GMB and Nipsa who began industrial action this week over pay and salary harmonisation.

In a joint letter to members, the unions urged them to attend the demonstration at the Civic Centre which will coincide with a full council meeting at 6.30pm.

They also said that with no “meaningful offer”, all Unite members will again be on strike from Monday while Nipsa and GMB will be escalating their protest and taking strike action or action short of strike.

The letter, signed by Kevin Kelly of Nipsa,  Brenda Stevenson of Unite and Alan Perry of GMB, said while some political parties have shown their support for the strike, others have not.

It also said that management had attempted to resume talks via the Labour Relations Agency this week but “with no mandate to discuss your dispute from councillors this would have been futile”.

They added: “Trade union sides have met and had discussions with various political parties and while these meetings were productive, we have yet to get a breakthrough that all parties support.

“There has been public intervention and support from some political parties in local websites and social media.

“However, equally some councillors still want you to believe that the informal offers made at the Labour Relations Agency and reiterated by the CEO in an email today (while on holiday) are in some way adequate to resolving your dispute.

“We would hope to take this opportunity to meet those councillors that have been reluctant to do so and for you to state your case directly to them.”

Outlining why the council offers are not acceptable, they said: “There has not been an acceptance of any national pay award so why is it being used for local negotiations?

“Even if it was accepted, the CEO wants you to believe the award is a pay rise of £1,925 for all staff within council. We appreciate that for someone on a remuneration package of over £150,000 a year inflation at 11 per cent and rising is not such a big deal.

“However, for you, in order just to stand still this year’s pay offer needs to be in excess of 11 per cent. The national pay award of £1,925 for the majority of staff will be in the region of six  to seven percent. Therefore, this is a pay cut.”

They also pointed out that members have been waiting seven years for pay harmonisation. At present, some staff in the three separate legacy councils receive different rates of pay for the same jobs.

The unions thanked members for their “commitment and the sacrifices you have made to date during this dispute”.

“Your resolve has been tested and it has not been found wanting,” they said.