Thousands sign petition as protest demands: ‘No SRC campus in our Craigavon Park’ 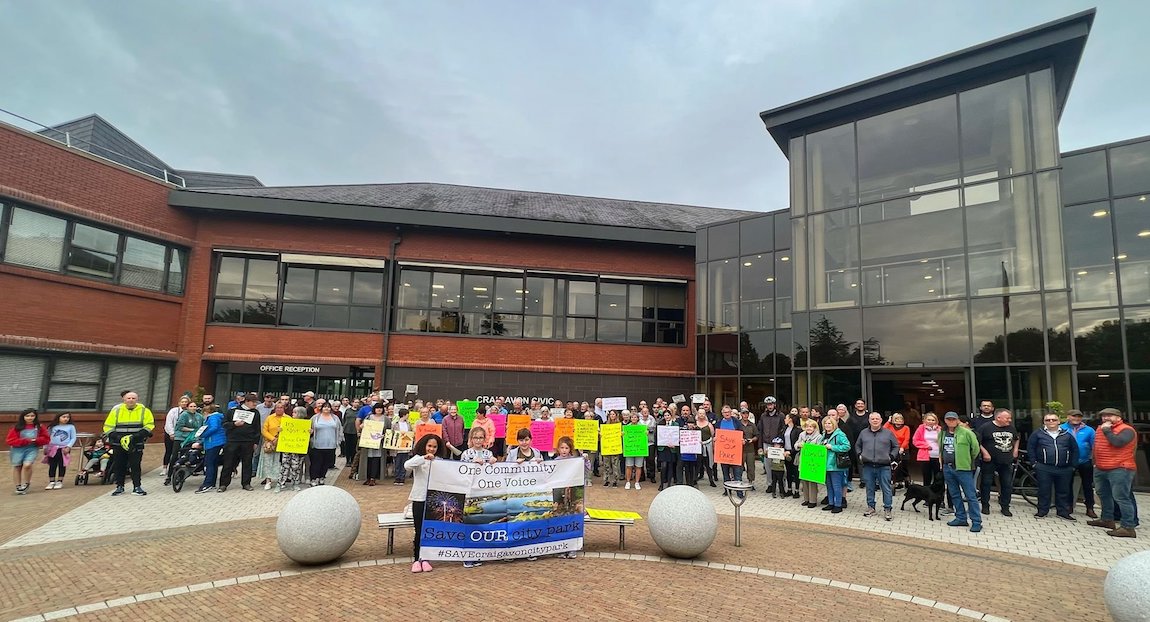 Scores of protestors have picketed outside ABC Council’s Craigavon Civic Centre HQ as they handed over a petition against plans to build the new Southern Regional College campus on land at Craigavon Park and Lakes.

Campaigners are also looking ahead to a judicial review into actions surrounding the handing over of land for the multi-million pound SRC facility. The protest was organised by the Save Craigavon City Park and Lakes lobby group.

And organisers say they were “delighted” by the number who turned up to join their ranks.

Campaigners say they were prevented from entering the Civic Centre to hand over their petition to ABC Council chief executive Roger Wilson.

And they have outlined why they believe there must now be a change of thinking even at this 11th hour, saying they are “determined to stop ABC Council selling off all the land at the South Lake in Craigavon City Park for development”.

Said a spokesperson: “Our campaign is not just about the current Southern Regional College development. It is about a proposed future SRC additional land take and the lands council have advertised for development beside the planned SRC site.

“It covers all the land around the South Lake. Council is turning our park into just another black path. It is totally unacceptable and it is not going down well with local people.

“This would never happen in any other park in the area, so why should we accept it here? Council have protected Scarva Park in perpetuity, same for Brownstown 3G in Portadown and Victoria Playing Fields in Banbridge.

“Councillors unanimously refused planning permission in Gosford Forest Park because they did not want to set the ‘dangerous precedent’ of building in our Public Parks.

“There would be uproar if they decided to do this to Lurgan Park or any other park in this Borough.

“Craigavon City Park was built as a park for the new town of Craigavon and councillors have forgotten that. They refer to it as The South Lake Zone or a ‘wee bit of land beside the lakes’. It is a park!

“Craigavon City Park got a lot of people through lockdown. The number of users has increased significantly since then. It helps a lot of us with both physical and mental health issues. It is a fabulous leisure resource that brings people into the area.

“We will not be able to use our park in the same way if any of this is allowed to go ahead. The SRC development on its own brings an additional 3,500 visitors to the park on a daily basis. Thousands of extra cars trips in and out onto an already congested roundabout. The pollution levels at the site already exceed levels approved World Health Organisation. This will worsen significantly if they pull out the trees that absorb the pollutants.

“The impact on our wildlife will be devastating. There are so many protected species on this site. The otters are a real visitor attraction, but there are so many more living there, Bats, Kingfishers, Hedgehog, Greylag Geese, Newts, Buzzards, Badgers, Jays……. even the elusive Pine Marten which is the rarest mammal in the UK. It is just not acceptable to bulldoze them out of their homes. There are plenty of alternative sites!

“Officers approved this planning application using the Community Benefit Clause to overwrite the zonings in the Area Plan. We do not dispute that SRC will bring community benefit and we are not against the building of a new SRC Campus for our young people. Most of us have children and their education is important.

Organisers accused councillors – “with the exception of one or two” – of refusing to listen to them.

And they point to the 6,700 signatures on a petition and over 350 written objections.

The spokesperson added: “Council did not listen.

“This planning decision was already made before the application was submitted. All political parties voted to support it without any consultation with residents. The ABC Council gave this proposal it’s backing way back in March 2015. There is an SRC room listed on the plans for the new South Lake Leisure Centre which was approved four months before the SRC application was submitted.

“Craigavon City Park brings people to Craigavon. It has so much to offer but councillors will not admit that as they have let things go too far. One of them recently accused us of ‘not liking children’. This is what we are up against.

“To date the council have spent close to half a million defending this case. That could double. We as residents do not want it here, but our rates are being used against us to pay their legal bills to keep it here. Any revenue they will get from selling the park will be swallowed up in legal costs. They did not consult with us. Had they had the manners to do that, things would be very different.

“Our case will be heard in the Court of Appeal on 21st June. We are hopeful that we will win this time. The previous Judicial Review Judgement took two years to complete because of the volume of paperwork involved in this planning application.

“The Judge said that “The use of the term “city park” by the Applicant has no planning status and is largely irrelevant in this debate.”

“It is relevant to us because it is a park and any development within a park should be sympathetic to that fact. We have a very capable legal team working on our behalf. Claire McKeegan of Phoenix Law, Barrister Malachy McGowan, and QC Paul McLoughlin. We have had a significant Planning Report compiled by Dr Louise O’ Kane of Community Places which states in no uncertain terms that this development does not comply with the Craigavon Area Plan. We are hopeful of success.

“We will continue to fight to save our park because what they are doing is wrong on every level.”

A spokesperson for Armagh City, Banbridge and Craigavon Borough Council said:  “As this is an ongoing legal matter, Council will not be commenting at this time.”