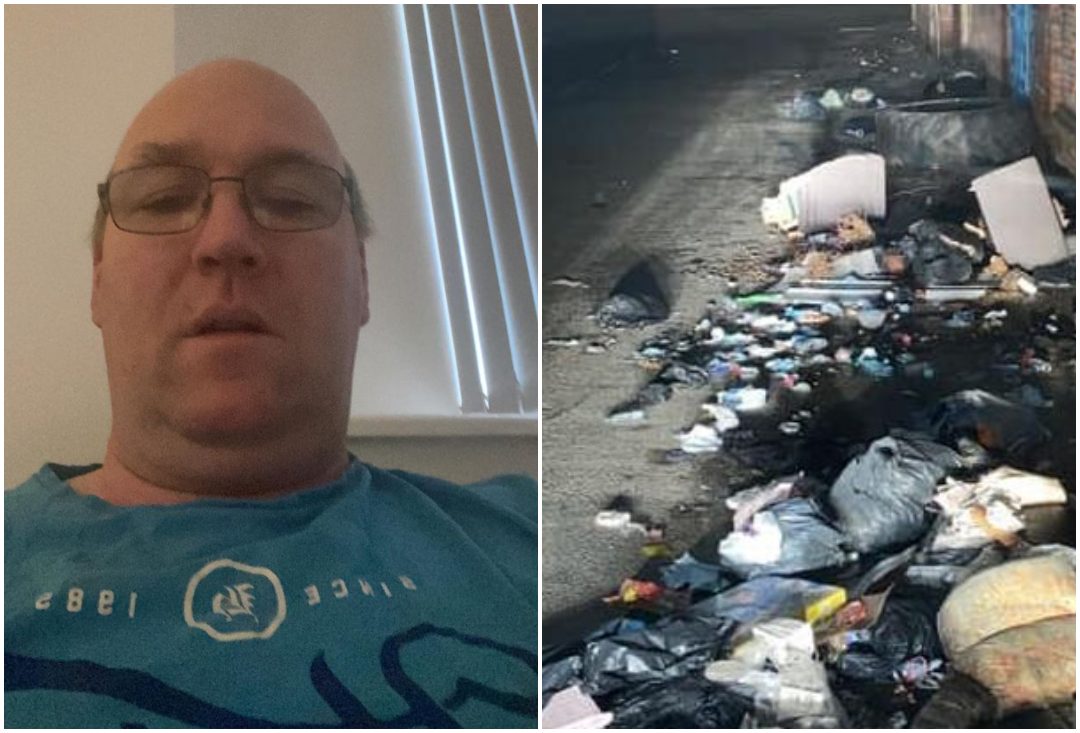 A Waringstown lorry driver, who was told he’d have to self-isolate in his cab at the side of a motorway in England for 10 days after testing positive for Covid-19, has spoken of the harrowing experience he has had to endure over the last three days.

John ‘Sticks’ Hanna, a father-of-three, was travelling to Belgium through England when he stopped at services on the M62, outside Liverpool, to undergo a rapid Covid test – a requirement to cross the channel into France at present.

This was on Tuesday at 5pm.

To his surprise, it returned a positive result within half an hour, scuppering the 42-year-old’s plans – but the trucker accepted there was little he could do about the result.

“First thing I asked the guys was ‘what happens now?'” John told Armagh I. “Well the two boys threw their hands up and said ‘we don’t know’.

John, who knew he’d have to self-isolate for 10 days, explained to the men that by law he cannot possibly go anywhere, pointing to his lorry cab.

“There’s the cab of the lorry, where am I suppose to go to the toilet,” he asked. “That was on Tuesday, I was really desperate for the toilet by Wednesday morning. I went back out to services where I was tested, at 3pm on Wednesday, and I had to go down an embankment into a field, and crouch down like a flipping animal. They wouldn’t let me go to the toilet anywhere else. I felt like a leper.”

John knew things were bad when help wasn’t forthcoming, but panic started to set in on Wednesday morning – after a night spent with some rats down a dank alley in Liverpool.

“I didn’t think I was in trouble straight away because I thought these boys at the test site would have a contingency plan in place, the way they have in Kent. If you test positive down in Kent they have a hotel for you but there’s nothing up this end at all.

“What I couldn’t understand was why they didn’t even take my mobile number; how were they going to track and trace me if anything does go wrong, or if I did go anywhere.”

He added: “I went back into Liverpool and did the proper PCR [Covid] test at a walk-in in Bootle. That then threw up a positive result in the middle of the night.”

The positive result was the least of his worries though. For John, with his lorry, took up refuge in an industrial wasteland strewn with rubbish and vermin.

“I put a photo of the alley on social media (main image); I moved out of that place on Tuesday because I was getting colder and rats were coming out of everywhere – they were as big as cats. I was afraid of them coming in around the engine to get heat and end up eating wires.”

That was 14 hours of hell for the stricken trucker who had searched in vain for more salubrious surroundings. His desperate predicament meant he had to turn to social media – the response, he says, “restored my faith in humanity”.

John continued: “I also emailed Jonny Buckley’s (DUP MLA) office, and [Councillor] Lavelle McIlwrath came back within five minutes of that. The man has worked tirelessly since; he even rang me earlier on there. He’s been on the phone to me every hour, he’s some man. He even took my mobile number home with him, sure he could hardly sleep at night himself.”

“As for the social media response, I never thought in my wildest dreams my appeal for help would have taken off like that.”

While his temporary living arrangements were a problem, John’s health was slowly – and worryingly – deteriorating over the few days of uncertainty.

He explained: “My symptoms come to a head on Tuesday morning. Monday, I was coughing while I was travelling in Wales. I was getting that achey feeling you’d get if you were getting the flu. On Tuesday morning I lost my sense of smell and I knew that was one of the sure signs.

“I’m asthmatic but luckily I’ve antibiotics for it now; I started to spit up green phlegm. I rang my GP on Wednesday morning who got it sorted for me over here; he’s right and good that way but it has been 10 years since I last saw him.

“I was smoking nearly 80 cigarettes a day and getting chest infections every three months back then; I think he was surprised to hear from me after so long but I have given up the cigarettes; I’m off them six years this March.”

It wasn’t until last night (Thursday) at 9.45pm when John finally got himself sorted with a proper roof over his head, thanks to the tireless help of Councillor McIlwrath, who reached out Liverpool City Mayor’s Office.

A crew from North West Ambulance Service collected John from the services car park and took him to the self-catering apartments in the city centre, where he will continue his period of self-isolation – most likely until next Thursday/Friday.

“Walking in and seeing a bed, what a massive relief,” John recalled. “Lavelle rang me and said he’d sleep a bit better tonight knowing I was finally sorted. Me, I slept like a top.”

John says the boats should do more for long-distance hauliers who find themselves in situations just like his own.

“It’s okay getting a test done in Belfast and then coming out and doing a week’s work around Europe, before coming back home via England, testing in Liverpool only to test positive again. What happens then?

“I think the boats need to step up to the mark. They should at least have dedicated cabins, where if someone tests positive, they can put the driver in there, self-isolate them and get them home.”

All in all, John is looking forward to getting home to his wife Audreyann, and three children Benjamin, Yvonne, and Jason.