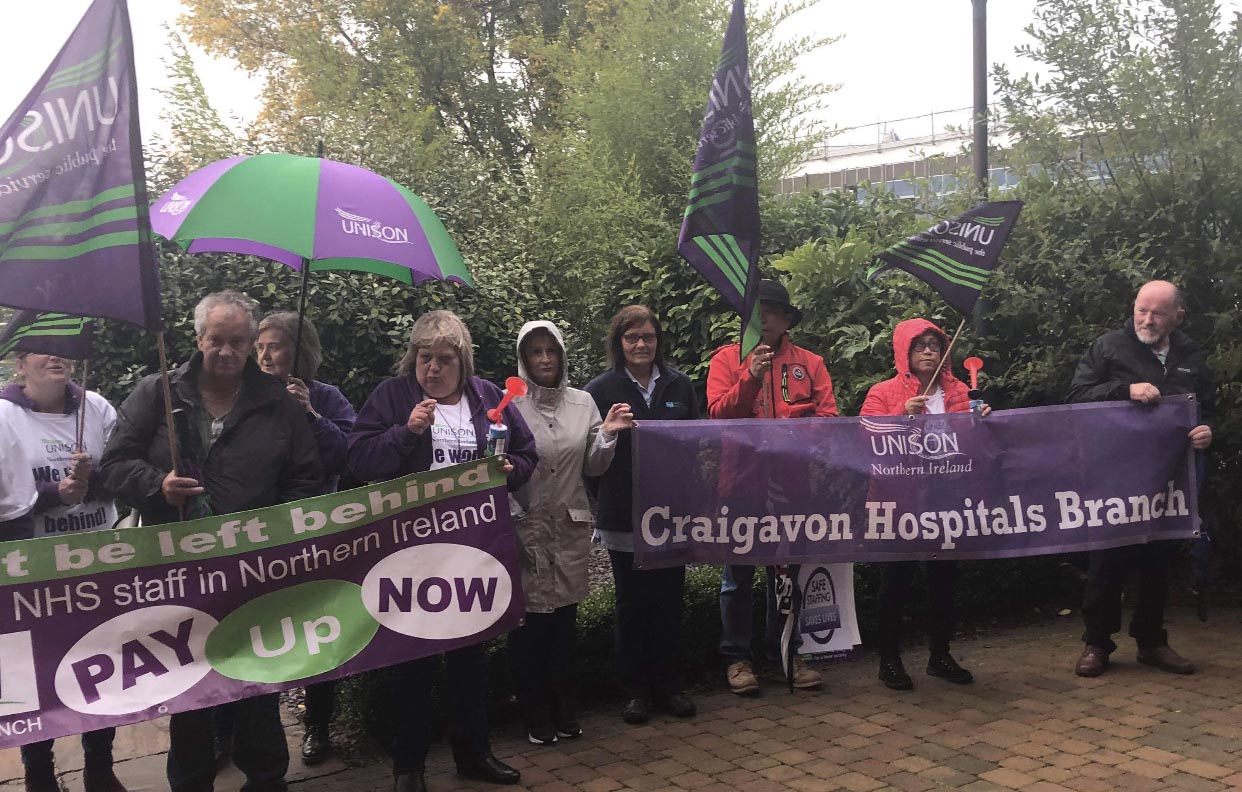 Protestors gathered outside Craigavon Civic Centre on Monday calling for fair pay for all NHS workers.

UNISON Craigavon Hospitals Branch activists were vocal in their demands with one councillor stating “I could hardly hear myself think inside the chamber”.

‘What do we want? Fair pay. When do we want it? Now!’ was the chant billowing outside Council HQ during Monday’s evening’s monthly meeting.

Despite the wind and rain, the crowd were lively in their call for politicians to fund a pay deal for NHS workers in Northern Ireland, who remain the lowest paid in the UK.

The activists stood firm, calling out chants of “We won’t be left behind” and “Fair pay for all”, while others sounded horns and clashed pot lids, making sure their demands wouldn’t be ignored by the council meeting attendees.

“UNISON will not give up the fight for fair pay, but we need you, our members, to stand with us. Raise your voice, we won’t be left behind.”

Meanwhile, inside the chamber, a motion was passed whereby the Council recognised the invaluable contribution made by health care workers to citizens across the Borough.

Sinn Féin Councillor Catherine Nelson said: “In recent weeks and months I have been contacted by many nurses under huge pressure in their workplace. We are all too aware of the chronic shortage of nurses in the North – the vacancy rate currently sits at 13%. That amounts to 2,600 unfilled nursing posts.

“In addition nearly nine attacks on ambulance staff take place every week here in the North. In 2018/19 paramedics were attacked a total of 452 times. Such assaults can cause long term physical and mental harm on those we rely on most when we ourselves or our loved ones take ill and reach for the phone.

“I also wish to recognise health care workers on the whole including our domiciliary care workers. They are holding our hospitals, GP surgeries up.

“They are the life blood of our healthcare system. And we are working some of them to the point of ill health. In the North nearly half our nursing staff report working 8 or more additional hours of unpaid work every week.

“Attempts to secure more staff and better pay through formal channels have failed to date and it is sad that industrial action is now the choice they are facing.

“We will now meet the Chief Executive of our Trust, write to the Health Departments Permanent Secretary and hold an annual recognition event.”

An Alliance motion calling for an increase in funding for hospice and palliative care also passed on the night.

Lurgan Councillor Peter Lavery, brought the motion, which was seconded by the SDLP.

It followed an announcement by the UK Government of a £25 million cash injection which would be provided for hospice and palliative care services in England, Scotland and Wales.

“It costs £15.5 million annually for Northern Ireland Hospice to provide specialist palliative care to infants, children and adults, with only 30 per cent of that received through statutory funding,” he said.

“NI Hospice provides exceptional services to our local communities and raises as much money as possible to allow these services to continue. However, the charity is finding it increasingly difficult to reconcile the rising costs with growing demand for its services, which are used by approximately 4,000 people each year.

“I want to thank Council for supporting calls for a funding increase, and I would particularly like to thank Councillor Larkham from the SDLP for seconding the motion, and councillors Julie Flaherty and Lavelle McIlwrath for their positive contributions during the debate.”