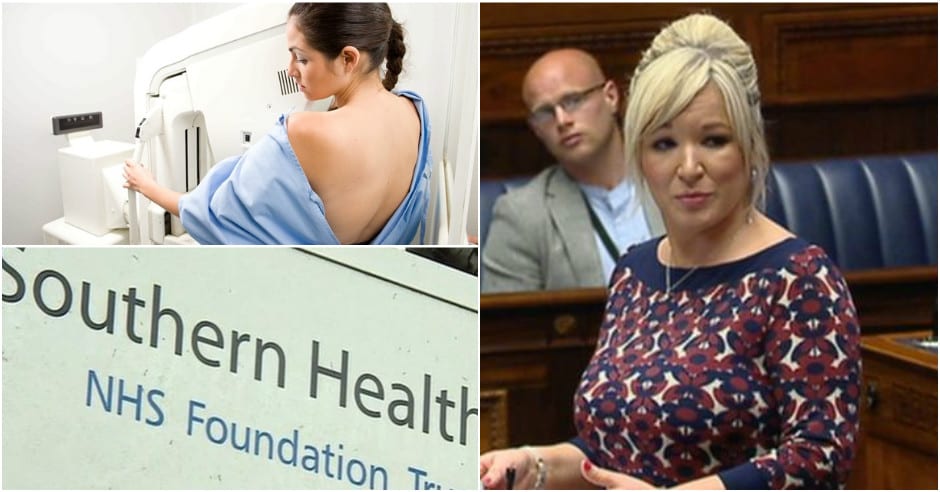 Urgent breast cancer screening in the Southern Area is the worst in any area, with one MLA describing the local Health Trust performance as “shocking”.

A report by the Department of Health showed that 93% of patients in the Southern Health Trust area waited more than the target of 14 days for a first consultation after an urgent referral for suspected breast cancer.

And while indications had shown that there had been an improvement last month in figures, Health Minister Michellle O’Neill accepts that more must be done.

To that end, a workshop is due to be held on October 26, with all trusts to identify “longer-term solutions for providing a sustainable breast service” across Northern Ireland.

The Minister also speaks of the need for no competition between trusts and to work together.

There were strong words in the Assembly when the performances – highlighted in a report – were subject to an urgent oral question to the departmental head.

Minister O’Neill accepted the Southern Trust was “experiencing challenges” in meeting the 14-day target for urgent referrals for suspected breast cancer and expressed her “regret”.

She assured the House that everything was being done to ensure those referred were being seen “as soon as possible”.

Minister O’Neill said: “The provisional figures for September show a marked improvement in performance in the Southern Trust, with 77·6% of urgent referrals seen within the 14-day target.

“That is as a result of trusts working together to provide additional clinics.

“In addition, the trust has extended its working hours, and that has facilitated the operation of a fourth breast clinic.

“Increasing pressures on cancer services, due to an ageing population and increased referrals, inevitably create a pressure on our health services.

Upper Bann MLA Jo-Anne Dobson was scathing of the “shocking performances” and accused the Minister of refusing to “take any responsibility”.

The Ulster Unionist said the waiting times were “symptomatic of the human tragedy engulfing the entire Northern Ireland health service”.

She paid tribute to the “amazing staff – the doctors and nurses who are working day in, day out”, but went on to ask the Minister how many of the 215 out of 224 suspected breast cancer patients in the Southern Trust who were not seen within the target of 14 days were subsequently given a breast cancer diagnosis.

Minister O’Neill, while not providing numbers in response, said she did not think it is “acceptable that we have the situation that we have”.

The latest available indication was that 95% of women in the Southern Area were being seen within the target.

Minister O’Neill spoke of the improvement in this area.

She added: “I think that the Southern Trust has turned the picture around. It has faced down the challenges that it has had. Is it acceptable when it happens? No, it is not, but we have to keep driving change forward and making sure that people work together and deliver better outcomes.”

SDLP MLA Mark Durkan – who had tabled the original question – went on to ask if the Minister accepted the need for a cancer strategy for Northern Ireland.

In response, the Sinn Fein Minister said she had raised that issue in the House before and discussed it on the back of a debate in the Chamber, stating “clearly that I would look towards developing a cancer strategy”.

“I think that what we have seen over the last number of months, particularly in the Southern Trust area, has been shocking,” Ms O’Neill replied.

“I think that it is unacceptable that any woman has to wait any longer than is absolutely necessary. The targets are challenging, and they are challenging for a reason. That is to make sure that we deliver the very best outcomes that we possibly can for any woman who finds herself referred for breast cancer assessment.”