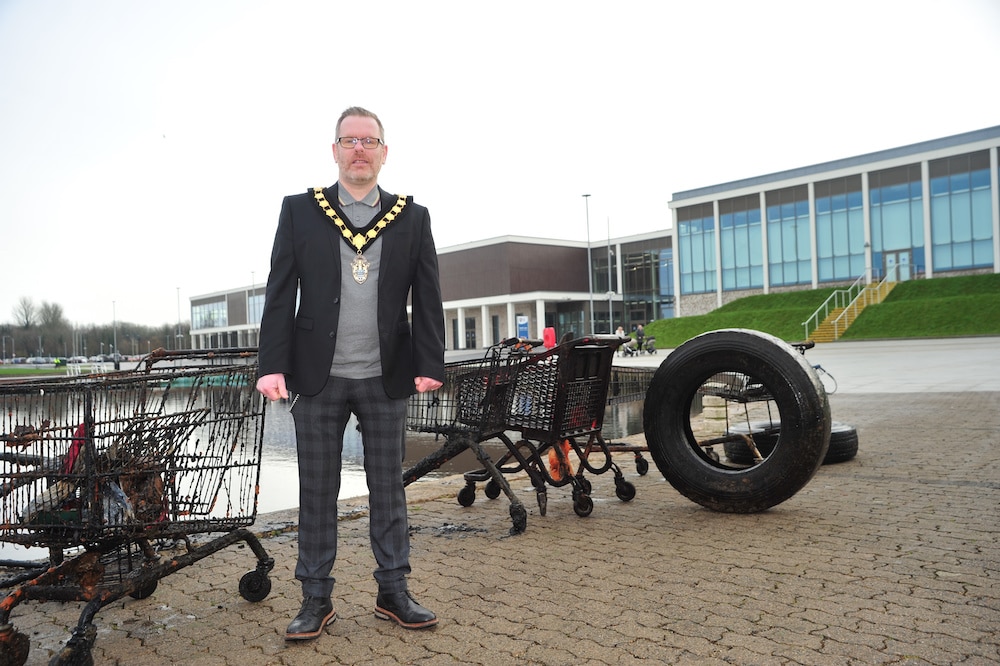 Fifty-six shopping trolleys, 12 tyres (including a lorry tyre), six scaffolding planks, one push scooter and four bicycles – this is what has already been removed from the harbour area at South Lake following the commencement of a major Clean-Up Campaign.

This campaign, which will refresh the lake, started before Christmas to ensure that the waters will be restored, revived and ready to use when the new Watersports Centre and activities are launched later this year.

Staff from Armagh City, Banbridge and Craigavon Borough Council kicked off the Clean-Up Campaign by dredging the harbour and removing the vast amount of rubbish that has been discarded into the Lake over the years. So far, four 25kg skips have been filled.

After dredging the harbour, staff then took time to thoroughly clean the paths around the area as well as the slipway of the temporary Watersports Centre.

“This Clean-Up Campaign is a huge undertaking and there has been a determined team effort to start getting the lake and surrounding area back to its former glory,” commented the Lord Mayor, Councillor Kevin Savage.

“The dredging uncovered vast amounts of rubbish and has removed dead vegetation and pollutants from the water – but I know that this is only the beginning of the project. Lord Mayor Kevin Savage with some of the rubbish that has been cleared from the Craigavon Lakes
South Lakes Leisure Centre Craigavon Co.Armagh
15 January 2021
CREDIT: www.LiamMcArdle.com

“We are extremely hopeful that we will be able to launch our brand new Watersports Centre and range of activities later this year and our staff are working extremely hard to ensure that everything will be ready. The difference after just a few weeks of work is amazing and there are many exciting plans in the pipeline.”

The island based on South Lake will be next on the clean-up list along with extensive plans and collaborative working to manage water quality, sustainability of the area, community activity and regeneration, as well as new signage and a new and improved summer watersports programme.