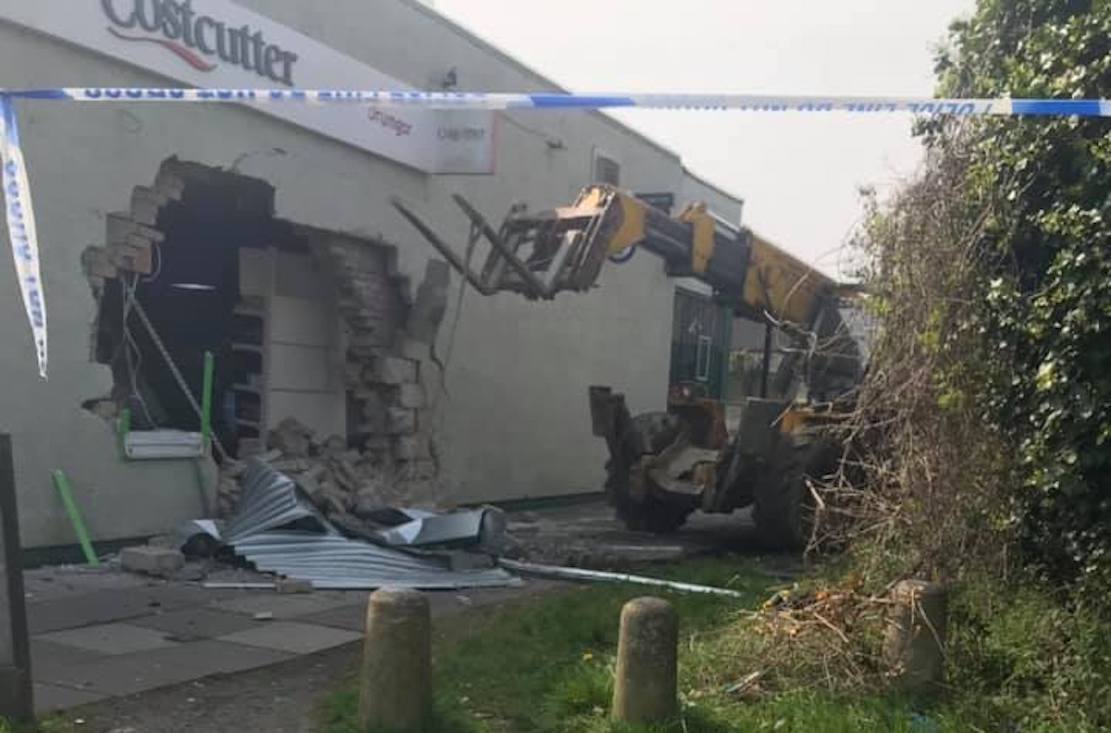 Detectives are investigating the theft and attempted theft of ATM machines in Crumlin and Craigavon in the early hours of this morning, Friday 19th April and are making an appeal for information.

At approximately 2.30am this morning, two ATMs were stolen from a shop on Main Street, Crumlin.

The machines were removed from the wall by a digger and placed into a pick-up truck.

The digger was then set alight before at least three men made off from the scene.

The second incident was reported to police shortly before 3.45am at Drumgor shops in Craigavon.

A telehandler used in an attempt to remove the cash machine from the wall.

The criminals were unsuccessful in their attempt and ran off from the scene, leaving the ATM and telehandler behind. They have now been recovered and examinations are being carried out.

Detective Chief Superintendent Darren Evans said: “The ATM attack in Crumlin was the tenth this year and I understand the concern of the public and the business community.

“Both this attack and the attempted theft in Craigavon have caused devastation and fear within the local communities.

He added: “I want to reassure the public that we continue to do everything that we can to stop these attacks and catch those responsible.

“We have dedicated teams of detectives investigating the attacks and increased the amount of resources dedicated to tackle this issue. Local police patrols continue to actively patrol vulnerable and high risk locations, day and night.

“However, the reality is that these attacks are carried out in a range of geographical areas and we cannot monitor every ATM, all of the time. We need the public to help us.

“Whilst we do not think these incidents are linked, stolen diggers were used in both attacks. This shows the importance of owners of heavy plant machinery ensuring that they do everything possible to secure and immobilise equipment. If the diggers cannot be stolen, these attacks cannot take place.

“I would also appeal to the public to report anything suspicious to Police. It is unusual to see a digger out on the roads in the evening or the middle of the night – especially now it’s the bank holiday weekend and most construction work comes to a halt.

“If you do see a digger on the road at these times, please contact us on the non-emergency number 101 and we can check this out.

“Also, if you see people or vehicles loitering in areas close to ATMs, particularly as some shops may be closed, or hear machinery late at night or in the early hours call us. If you think a crime is in progress please dial 999.”