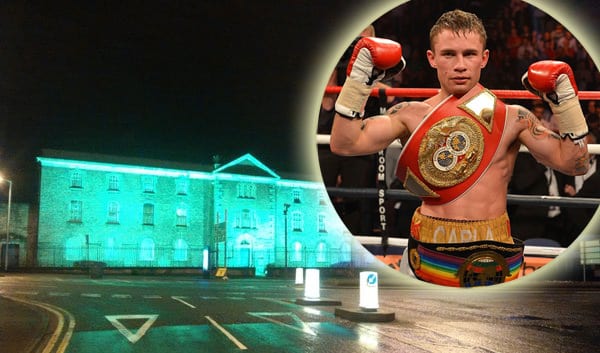 Boxing hero Carl Frampton is to be honoured with a civic reception locally.

The decision to stage the event comes after a notice of motion was passed tonight (Monday) at the monthly meeting of Armagh City, Banbridge and Craigavon Borough Council. The motion had been brought by the council’s DUP grouping, proposed by Alderman Carla Lockhart and seconded by Cllr Paul Greenfield and Alderman Junior McCrum.

It called for an “immediate congratulatory message” to be sent to Carl Frampton following his success in defeating Scott Quigg to secure the WBA super-bantamweight title.

In addition, given that Carl “lives within our borough”, it was proposed and agreed that a civic reception will be organised, to which the boxer and his family, together with his team of coaches, will be officially invited.

It will be to “officially mark the significance of his great success and recent win in Manchester”.

Civic buildings across the borough have already been lit to mark the achievement.