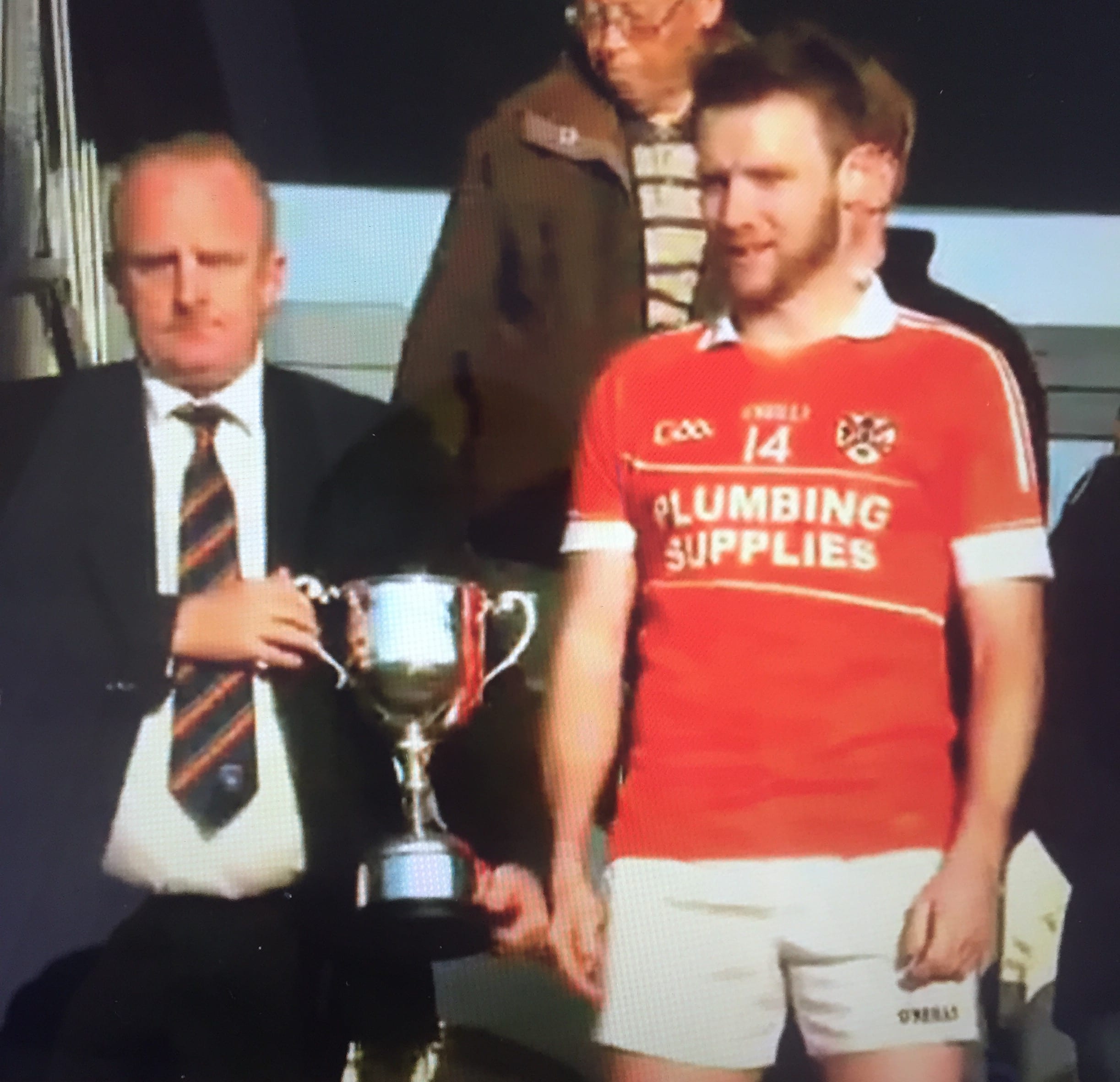 Clann Eireann claimed the TMet Intermediate Football Championship title, their first since 2002, with a five point victory over Whitecross in today’s Final.

There was a cagey start to this one as both sides analysed each other’s early tactics before producing any aggressive attacks.

The crowd may have had to wait seven minutes for the first score to arrive but it came with a bang – Clann Eireann’s Chris McCafferty smashing home a goal after he found space behind a distracted Whitecross defence.

Cathal McSherry got Whitecross’ first points on the board when he struck two in a row. Clann Eireann were looking strong though – they were winning a lot of the 50-50’s and coming out on top in the middle of the park.

Barry Seely struck two free kicks to bring Clann Eireann’s lead back to 3 points. Whitecross seemed to get their head into gear after that score – Barry Og McKeown knocked over a free kick after Neill McSherry was brought to ground on the 13th minute.

Just one minute later Barry added another free from 20 yards – Mark Shields intercepted a Clann Eireann pass, made a storming run through the middle, leaving Clann Eireann with no choice but to tug him back.

Whitecross, who were major underdogs in this match, managed to get themselves on level terms through Mark Shields. But just two minutes later Clann Eireann grabbed a second goal from the spot, Adam Kelly was fouled in the area and Seeley slotted the ball away under McParland.

That goal came as a major thud to Whitecross, after working so hard to get themselves into the game. Each side added one more point each before half time and Clann Eireann went in at the break leading 2-03 to 0-06.

The second half could not have had a livelier start. Whitecross immediately came driving at Clann Eireann – Cathal McSherry found space and struck a shot off the crossbar, the ball found its way to Neil McSherry who hit the crossbar again with the rebound, Mark Shields grabbed the loose ball and was barged over in a crowded area – the referee didn’t’ hesitate in awarding the penalty.

Conor Malone sent the keeper the wrong way and all of a sudden the Whitecross supporters were bouncing again.

A fine score was struck on the 37th when Paul McKenna received the ball 30 yards from goal and he deceived his marker with a smart turn, before dropping the ball over with his left.

Barry Seeley and another fourth point from Paul McKenna put Clann Eireann ahead by 3 after 42 minutes.

Whitecross were fighting hard but Clann Eireann just seemed to have that little bit more. Mark Shields struck a delightful free kick with his unique and reliable technique from the ground but Clann Eireann responded with four of their own through McKenna and Ryan Henderson – both getting two.

A late comeback attempt was sparked into action when Eamon Reavey fired low into goal after some tidy work by Cathal McSherry – leaving the score at 2-07 to 2-12 on the 56th minute. Soon after, Barry Og McKeown put over a short range which left things interesting as injury time approached.

Whitecross battled hard in the dying minutes but they just couldn’t crack down the Clann Eireann defence to get that third goal.

The game was bed to bed by the star man of the second half and potentially man of the match, Paul McKenna, the impressive forward slotted over from distance to leave the final score at Clann Eireann 2-13 Whitecross 2-08.