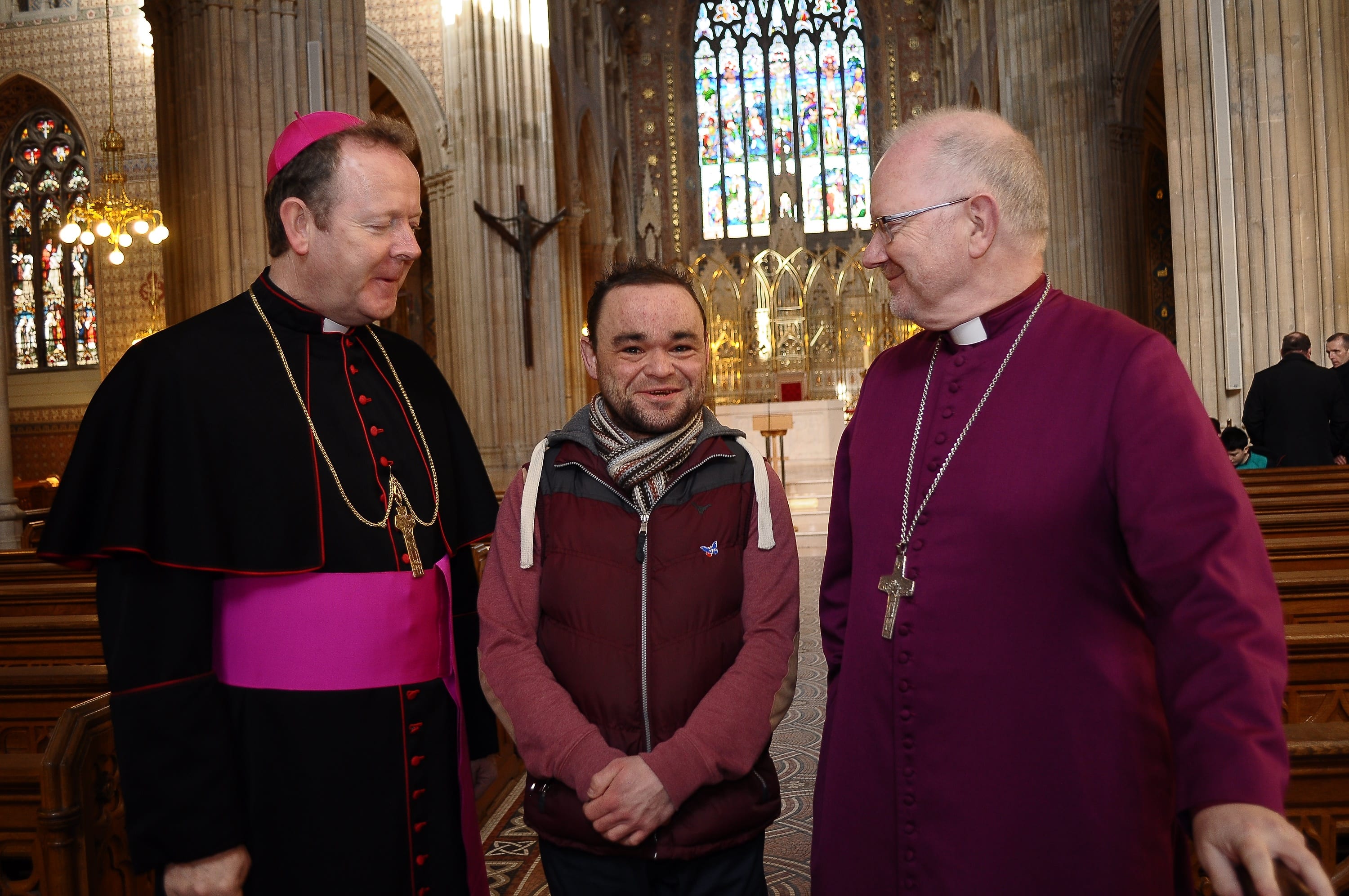 Armagh’s two Archbishops joined forces today to throw their weight behind the fleshandblood campaign to encourage blood and organ donation among local congregations.

St Patrick’s RC Cathedral was gift-wrapped in a giant red ribbon and bow, the first time ever across Ireland north and south that this has happened.

Among those present at the event, attended by Archbishops Eamon Martin and Richard Clarke was Armagh man Neil Robinson, who in November underwent a second life-saving kidney transplant.

St Patrick’s RC Cathedral in Armagh agreed to host the ribbon around the iconic building to mark the launch of the ‘fleshandblood campaign’.

The ribbon itself, which took four hours to install, measures 200 metres long and 2.5 metres high with a giant four metre high bow at the front. The wrapping of the Cathedral was designed to profile the All-Ireland launch of the fleshandblood campaign.

This unique initiative aims to encourage Church congregations and parishes to see blood and organ donation as a part of their giving.

It also seeks to equip people as advocates for blood and organ donation, enabling them to raise awareness of the need for donors with their family, friends and community, potentially helping to save thousands of lives each year.

The Cathedral also hosted a presentation which focused on the purpose of the campaign and the need for more people to give blood and agree to organ donation across Ireland.

Dr Rooney said: “In Northern Ireland and the Republic, around 800 people are currently waiting for an organ transplant, with 96,000 people receiving blood transfusions every year.

“We hope that many more lives will be saved and transformed through the generous commitment made by the Churches in Ireland to raise the profile of blood and organ donation, placing it on the agenda for the Church.”

The two most senior clerics in Ireland were both existing advocates for donation before their participation in today’s event.

Archbishop Richard Clarke said: “The Church is an organism that is characterised by its giving nature; its people are characterised by being giving people. So, when there is need across Ireland for more people who would give the gift of blood in life, or of organs after earthly death, this is an opportunity for giving of which all should become aware.”

Archbishop Eamon Martin added: “The challenge of the fleshandblood campaign, to see blood and organ donation as a part of our giving within the Church, is one I encourage us all to consider; that we might mirror God’s perfect gift to us in His Son by giving the gift of life ourselves.”

Today’s event kicks off a week of activity by the Churches, culminating in a further event at St Patrick’s Church of Ireland Cathedral, Dublin on Friday hosted by Cathedral Dean, Very Revd Victor Stacey, who will welcome the Archbishops and health service representatives to the historic Lady Chapel.

Mr Cousins explained: “As blood donation services, both the IBTS and NIBTS have been very fortunate to benefit from the strong values and altruistic beliefs of donors, regularly giving of themselves to help others.

“We are particularly pleased to have the support of the Churches across Ireland to raise awareness of the constant need for blood donation and enable us to reach into communities to help us maintain supply for all our hospitals.”

The two events follow the Christmas Day message broadcast on RTÉ, from the Archbishops who, as part of their commitment to raising the awareness of donation, dedicated their annual joint message to meeting blood donors and people whose lives have been transformed by organ donation.

Founded as a partnership between Kore and NHS Blood and Transplant in 2013, the fleshandblood campaign has already witnessed widespread support across churches, community groups and from government ministers in England, Wales and Scotland, with over 35,000 local church leaders having been resourced.

The impact has been so great that other faith groups working on similar concepts are also being supported by the organisers of the campaign.