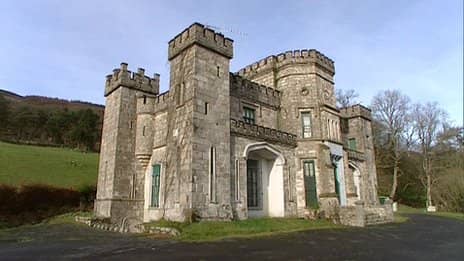 A plan to redevelop an historic castle in south Armagh into a hotel – bringing at least 83 new jobs to the area – has taken a major step forward.

Newry, Mourne and Down District Council has agreed to provide funding of £260,000 towards the scheme.

Further avenues of funding are also expected to be explored to allow the redevelopment of Killeavy Castle finally to proceed.

The money from NMD Council has been agreed after a proposal was passed by Sinn Fein Councillor Terry Hearty.

It will go towards the conservation and regeneration work at the site.

There are also plans to create new viewpoints, walkways and open to the public the stunning walled garden.

Killeavy Castle -the construction of which dates back to 1810 – has deteriorated and left largely dilapidated.

The castle – also known locally as Bell’s Castle, as it had until recently been in the ownership of the Bell family – is to be restored to a 40-bedroom hotel, providing a huge boost for tourism in the area.

Plans for the development were given approval by the former Newry and Mourne District Council in February of last year.

The castle is set in a 330-acre estate and was bought by the current owners for almost £1.2 million in March 2013.

Now the project has been given a major boost and fresh impetus with the granting of £260,000 towards the works – something which has been welcomed by south Armagh Sinn Fein MLA Megan Fearon.

“This is a fantastic project that will not only see that the 200 year old castle is conserved and redeveloped but will also lead to redevelopment work of the surrounding area and create at least 83 new jobs,” she said.

“Our councillors have been to the fore on this project and ensured it remained on the new council’s agenda, while both myself and Conor Murphy have met with the owner numerous times to discuss ways of pushing the initiative forwards.

“This is a huge project but one that will have enormous benefits for the local area and, as such, there is also the possibility of securing other funding from sources such as Invest NI and the Rural Development Programme secured by Michelle O’Neill.”

“Tourism has the potential to be a huge economic driver for this area, which is why Sinn Féin pushed for the creation of a tourism specific committee,” he said.

“We have seen what a meaningful investment can do for local resources like Slieve Gullion and we believe we can make a similar success out of a redeveloped Killeavy Castle.

“Not only will this project see the conservation and development of the castle, it will also see other projects, such as viewing stations created, further development of walkways in the area and public access to the walled garden.

“We live in one of the most historic and beautiful parts of the country; we know that and, with the right investment, the rest of Ireland will know it as well.”