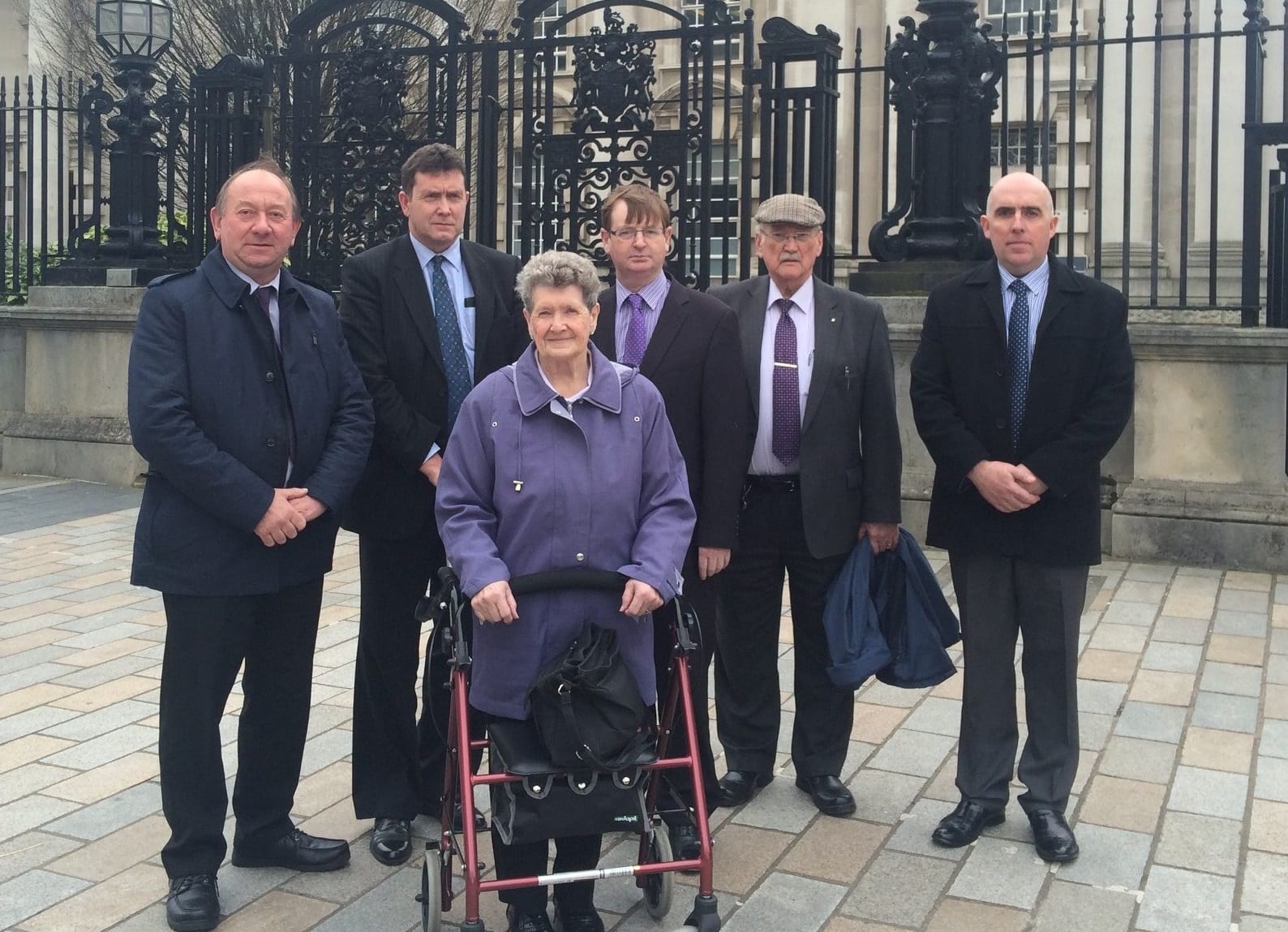 Mrs Worton pictured during a visit to Dublin as part of the fight for justice. Included is her close friend William Frazer, who died just one week earlier.

Tributes have been paid to Bea Worton – whose son Kenneth was one of the 10 murdered in the Kingsmills Massacre – after she passed away in hospital.

Mrs Worton, who was 91, died on Friday evening, with her family by her bedside.

DUP Leader Arlene Foster expressed her sadness at the news.

She said: “She was someone who became a campaigner out of necessity.

“I am so sorry she has passed away without justice for her son who was so brutally murdered at the Kingsmills Massacre.

“Thinking of her family at this sad time.”

Ulster Unionist Upper Bann MLA Doug Beattie said: “I’m saddened to hear of the death of Bea Worton – a tenacious lady who never saw justice after her son Kenneth was murdered at Kingsmills.”

Mrs Worton – who had previously received a British Empire Medal in the Queen’s Honours List – lived at Gosford Gardens in Markethill.

Also paying tribute was DUP Alderman Gareth Wilson, who attended her special 90th birthday celebration in the town during his year as Lord Mayor.

He said: “You couldn’t have known a nicer lady. I was very sad to learn of her passing. My thoughts and prayers are with her family at this very sad time.

“As well as a devoted mother, grandmother and great grandmother, she was also a tireless campaigner on the plight of innocent victims and, despite the pain of loss she suffered through one of the worst IRA terrorist incidents of the troubles at Kingsmills, she remained always so dignified.

“Markethill is the poorer for her passing.”

Mrs Worton and her son Colin joined with the families of the other victims of the Kingsmills Massacre and actively campaigned for justice since that darkest of days back in January 1976.

Her son Kenneth was 24 years of age and one of 10 ordered off a minibus and lined up against the side of a road and shot.

Each year Mrs Worton – who had been predeceased by her husband George – had attended the memorial service at the Kingsmills Massacre memorial on the spot where they died.

She had visited Dublin alongside politicians and fellow victims to meet with the Taoiseach and senior Irish Government figures as part of the campaign.

Mrs Worton’s passing on Friday came just a week after her close friend and victims campaigner William Frazer died in hospital at the age of 58.

Her funeral will take place on Monday, leaving her home at 1.30pm for service in 1st Markethill Presbyterian Church (Upper), followed by interment in the adjoining churchyard.

Mrs Worton is survived by daughters Jennifer and Jacqueline, and sons Dennis and Colin, and to they and the entire family circle, we offer our sincere condolences at this very sad time.