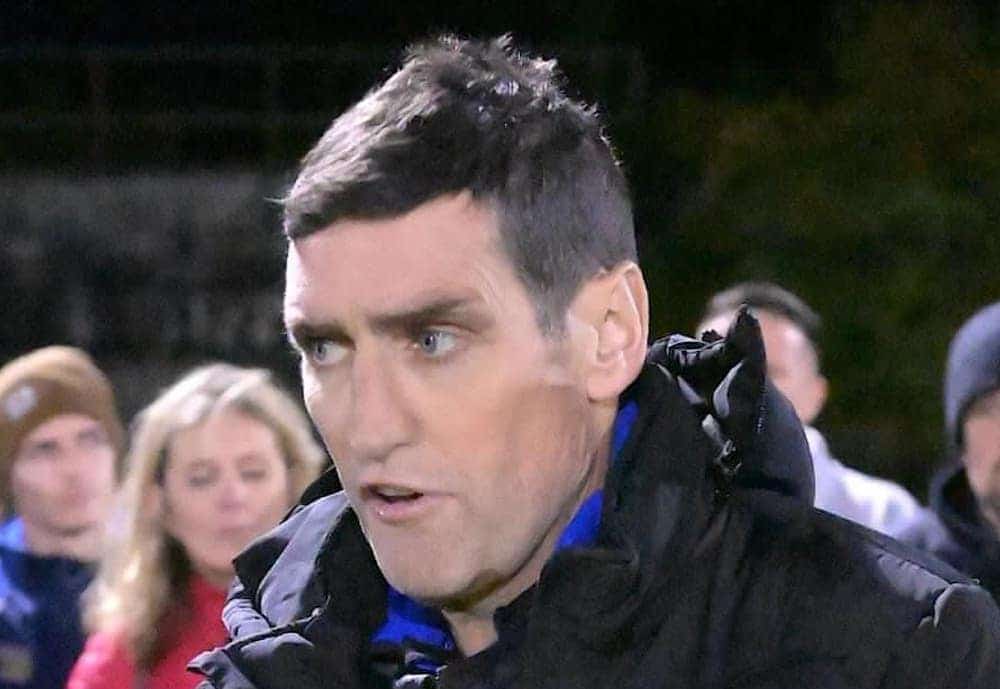 The 52-year-old lost his short battle with cancer at 7.15am this morning (Friday).

The club, in a short statement, said: “At this present time our thoughts, prayers and condolences are with his wife Tara and family. A further club statement will follow in due course.”

Wilson been appointed to the Lough 41 Premier Intermediate League club in June 2021 and also managed the Northern Ireland U18 Schoolboys side. He had been in charge of Sport & Leisure Swifts, Lurgan Celtic and Bangor over the years.

As a player Wilson was a defender for Cliftonville, Carrick Rangers, Ballyclare Comrades, Omagh Town and Bangor, representing all clubs with distinction.

The NI Football League said they were saddened by the news.

Gerard Lawlor, NIFL Chief Executive said: “Frankie was a much loved and respected figure in the Irish League for many years as a player and a manager. His courage and fighting spirit in recent months was reflective of how he played and enjoyed the game on the pitch.

“Our thoughts are with the Wilson family circle and everyone connected with Banbridge Town Football Club at this sad time.”

“CLG Aontroma send our heartfelt condolences on the sad news that former Antrim, Lámh Dhearg CLG and all around great Gael Frankie Wilson has sadly passed away after a great battle with illness. Deepest sympathy to his family and friends from all of us and everyone throughout the county. Ar dheis Dé go raibh a anam.”

Many have been paying tribute to Mr Wilson as “a real football enthusiastic and great family man and gentleman, one of the best”.

Another said it was a “pleasure to be managed by you, Frankie”.

One man wrote: “A great manager and an even better man, such a strong fighter. Thank you for the chances you gave me and laughs!”

Windmill Stars, posting on social media, said: “[The Club] would like to offer our condolences to the family and friends of Frankie and to all at Banbridge Town FC. We had the privilege of meeting Frankie last week at our match and is testament to the man that he was there giving instructions and advice to both sets of players. A great football man.”

One man wrote: “An absolute gentleman who gave myself and many others unbelievable footballing experiences and memories that will last a lifetime. You were one of the best Frankie, thank you for the memories! Rest in Peace.”

Another said: “Devastated to learn of the passing of my good friend, and my son’s teacher, Frankie Wilson. I met with Frank only a few months ago and he spoke passionately about his plans for Banbridge Town FC this season and beyond. His outlook was only positive.

“He was a much respected Antrim GAA player and stalwart, and played in the Irish League too. In addition to all his talent in sport and education, he was always interested in how you were getting on. He was bloody handsome too, and has a beautiful family. My thoughts go out to Frankie’s family circle, all his former team-mates, and all the pupils whose lives he positively impacted. Suaimhneas síoraí Frankie.”

Funeral details have not been released at this stage.