Petition with more than 3,000 signatures handed over in bid to save electoral offices 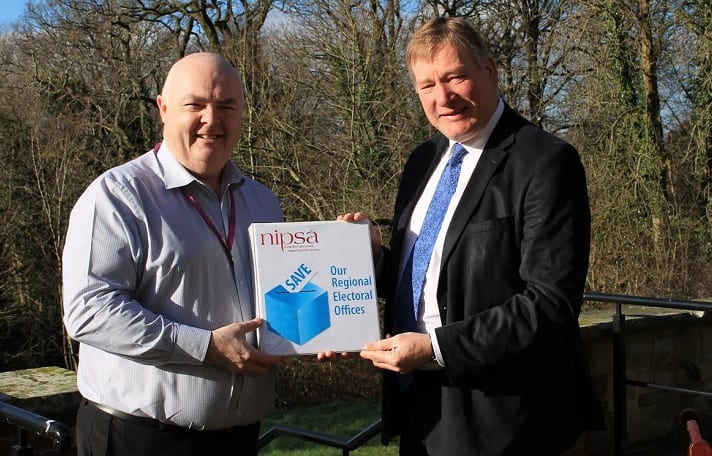 NIPSA has delivered over 3000 signatures to Under Parliamentary Secretary of State calling for regional electoral offices to be protected.

The ‘handover’ comes on the day Northern Ireland goes to the polls for a second time in under a year.

Under Management plans, electoral offices in Ballymena, Banbridge, Derry/Londonderry, Newtownabbey, Newtownards and Omagh will close and services such as electoral ID Cards and voter registration will be centralised into Belfast.

Minister Hopkins launched a public consultation in Autumn 2016 but the decisions from this consultation have been delayed due to the Assembly elections.

However a decision will be made shortly and NIPSA believes both the political and public support given should ensure the retention of regional electoral services.

Dooley Harte, NIPSA official, stated: “NIPSA is committed to retaining regional electoral offices and clearly communicated this at our meeting with Minister Hopkins.

“The Minister in turn assured NIPSA that there are no pre-determined outcomes to the consultation and that he will make his decision shortly after the election. NIPSA believes regional electoral offices must be retained and is calling on our local MLAs and counsellors to continue to support our campaign to retain these vital services.”