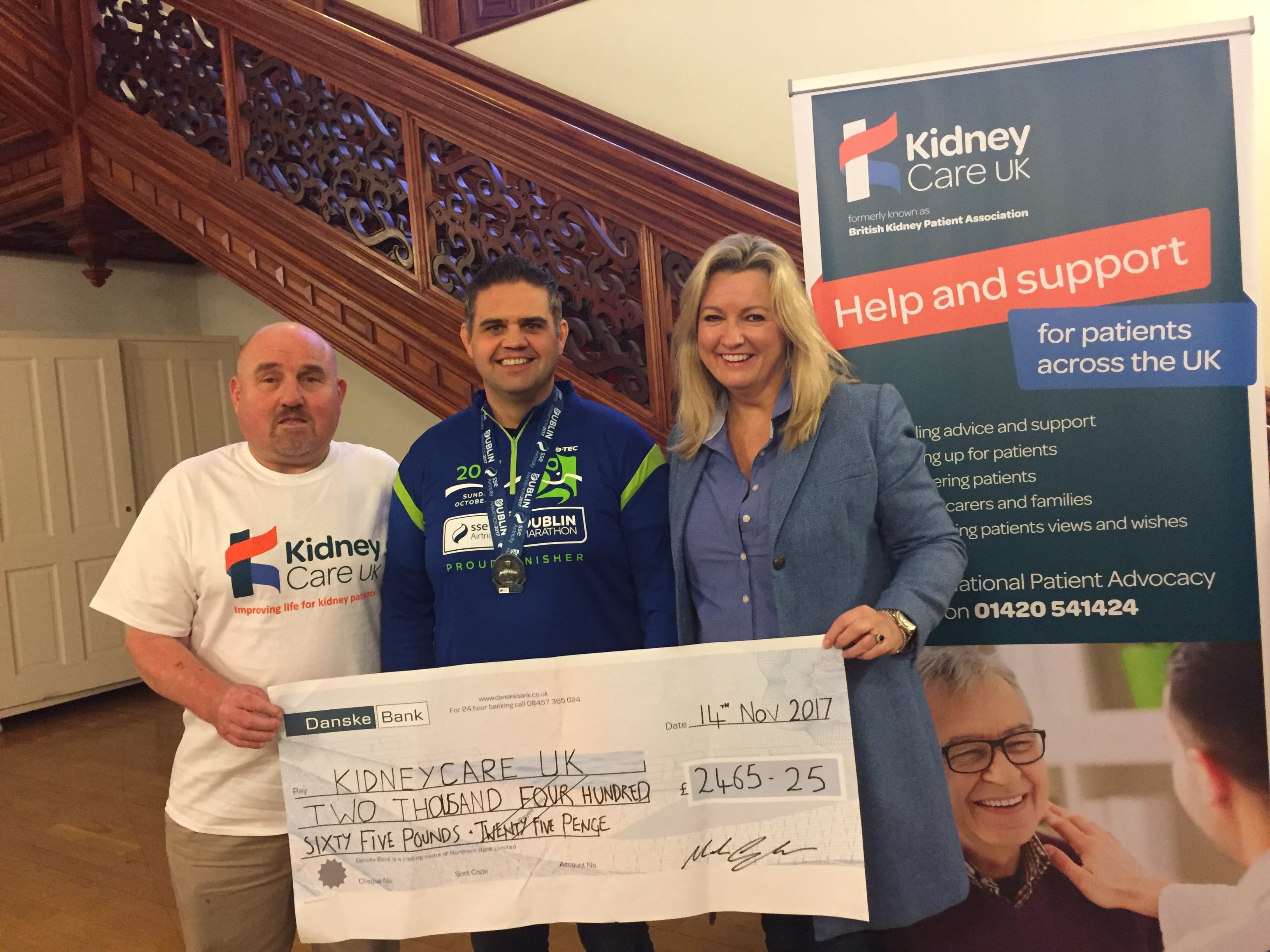 Banbridge financial advisor and Waringstown resident Mark Gordon has presented a cheque for £2,465.25 to the Kidney Care UK charity.

Last month Mark ran all 26.2 miles of the Dublin Marathon in memory of his mum Audrey Gordon, raising funds through his JustGiving page to help kidney patients and their families.

Mark had a very personal reason for his marathon effort – his late mum, a life-long Lurgan lady – received a kidney transplant in 1994.

It was always her wish that if Mark were ever to take on the challenge of a marathon he would do so to help patients and support organ donation – and he has certainly done it in style!

Speaking after presenting the proceeds of his charity marathon run to Kidney Care UK Advocacy Officer William Johnston, Mark said: “I am so thankful for all the wonderful support I received to enable me to make such a magnificent contribution to the work of Kidney Care UK.

“I was absolutely overwhelmed by the generosity of so many people whose support, encouragement and messages made it all possible. It was with immense pride that I was able to present the proceeds to a charity which will use it directly to support kidney patients and their families.

“In receiving her kidney transplant my mum benefited from the selfless generosity of others and I was determined by running this marathon to not only honour her memory but to follow in her footsteps by continuing to respect that gift and help transplant patients and their families.”

Mark’s family – including his wife Pamela, a classroom assistant at Waringstown Primary School, girls Rebekah (14), Alexandra (11) and his son Adam (10) – all made the journey to Dublin to be with him as he crossed the finishing line!

“When Mark contacted me to say he was going to run the Dublin Marathon in memory of his mum Audrey I was absolutely thrilled but to raise this magnificent amount is truly a marathon effort!

“As the mother of a kidney patient who received his first transplanted kidney back in 2009 we know exactly what it means to receive the gift of a life and to rely on the generosity of someone we will never know.

“The generosity shown to Mark by countless people as he honoured his mum’s memory was truly amazing.  Just reading through the comments of encouragement, inspiration and hope which were posted on his Just Giving page shows in how much esteem his late mum was held in her home town of Lurgan and further afield.

“Mark’s mum would be incredibly proud of her son for putting others first and making a real and lasting difference to our organ donation family. Well done Mark.”

Robert Hope, Head of Fundraising at Kidney Care UK, added: “We are so grateful to Mark, his amazing achievement has been an inspiration to many of our supporters.

“This huge donation will help us to provide more support to kidney patients in Northern Ireland, through our counselling, advocacy and grants as well as providing face to face help for people with kidney disease through William Johnston our Advocacy Officer in Northern Ireland. From William, myself and everyone at the charity, thank you so very much Mark.”

Mrs Dobson thanked Brownlow House for enabling the charity representatives to come in out of the cold and rain in Lurgan to make the cheque presentation.