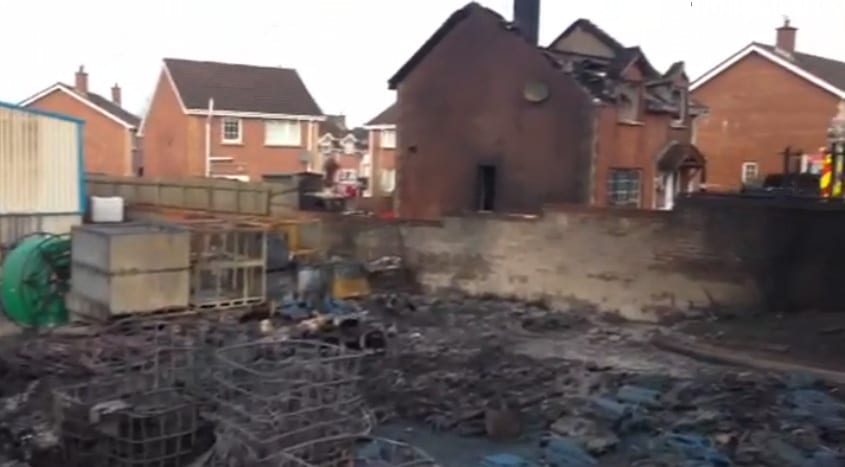 A family had a narrow escape after a fire at a nearby recycling centre spread to their home this morning.

A man, woman and young child were in the house in Rathfriland at the time.

The incident happened around 1.45am this morning and 42 firefighters worked to bring the fire under control

Fire service area commander Paddy Gallagher told the BBC: “On arrival, crews noted the fire involved one detached dwelling and plastics stored in the yard of a nearby factory.

“Over 40 firefighters have been involved in fighting the fire, with conditions particularly difficult due to high winds.”

Police in Craigavon are treating the fire as suspicious.

A police spokesman said: “Police received a report of the fire at 1.51am on Tuesday, 22 December. NIFRS were in attendance. A house in nearby Kiltariff Drive also caught fire and was completely destroyed by the blaze. A second house was also damaged.

“Police are now working to establish the exact circumstances of the fire and would like to hear from anyone who noticed any suspicious activity in the local area during the early hours of this morning.

“They would also like to hear from anyone who has information that may assist their investigation. They can be contacted on 101, quoting ref: 65 221215.

NIFRS continue to deal with the fire this morning. Residents in Kiltarriff Drive are advised to stay indoors this morning with doors and windows closed.

A Northern Ireland Fire & Rescue Service spokesperson said: “We received a call this morning (22 December 2015) at 01.45am to attend a fire in a property at Kiltarriff Drive, Rathfriland, Co Down.

“Two Appliances form Rathfriland Fire Station and 1 Appliance from Newry Fire Station initially attended the fire which involved a detached property, a car and a quantity of plastics stored in the yard of a nearby commercial premise.

“A man, a woman and a young child were in the property at the time of the fire and escaped before the arrival of Fire Crews.

“In total 7 Appliances from neighbouring stations including Newry, Warrenpoint and Banbridge attended the incident along with a Specialist Water Tanker and a Command Support Unit from Lisburn.

“Over 40 Firefighters were involved in dealing with the incident, with conditions particularly difficult due to high winds.

“The fire has been dealt with and 1 Appliance remains at the scene to dampen down isolated spots.

“The cause of the fire is under investigation”.

Environment Minister Mark H Durkan said: “This concerns me, especially given the fact that there was a risk to human safety. NIEA officers are providing guidance and assistance to the NIFRS and they are assessing the environmental impact of the fire. NIEA is aware the PSNI have commenced an investigation into the cause of the fire.

“NIEA officers have initially assessed the impact to the environment as low. This recycling site has an exemption to waste management licensing for the baling, sorting, and shredding of waste plastics for recovery or reuse, and the sorting and baling of paper or cardboard for recovery.

“NIEA officers will remain on site to assist the NIFRS until their operations are completed. I have asked them to keep me constantly updated.”

Glad that nobody was hurt in the fire at the recycling plant beside houses in Rathfriland earlier this morning.

More photos from @ItaDungan at the scene of a fire which spread to a house and a car in Rathfriland overnight. pic.twitter.com/dAtJBHx8b7 — Good Morning Ulster (@BBCgmu) December 22, 2015