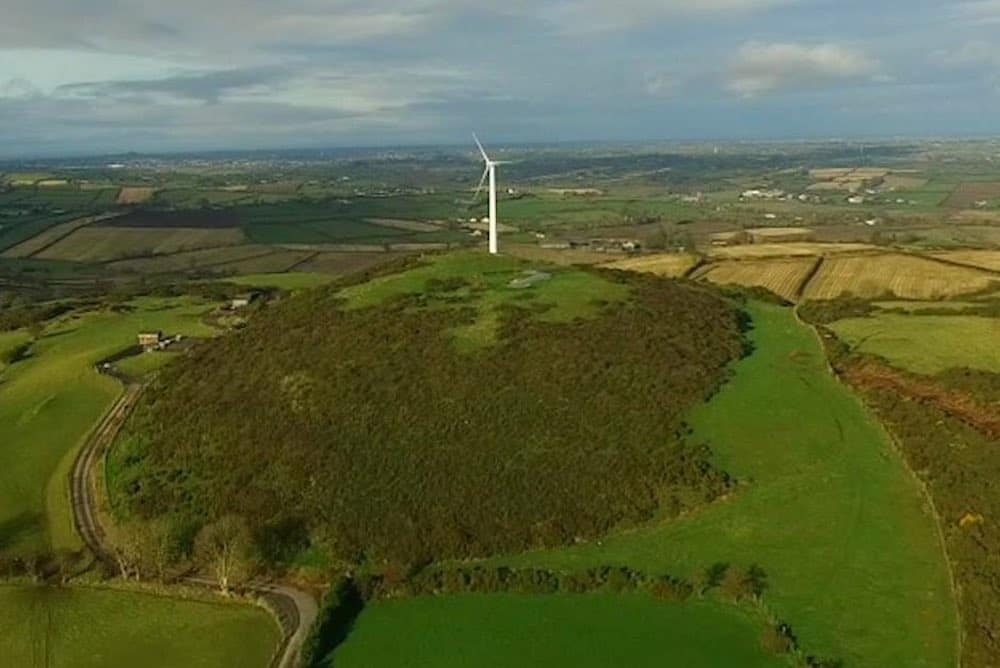 Campaigners were last night celebrating after Council backed their calls for the removal of a wind turbine on the ancient Knock Iveagh site outside Rathfriland.

The structure was erected in 2017, four years after permission was granted by the Environmental Department.

The issue surrounds its proximity to a 5,000-year-old neolithic burial site.

However, Armagh City, Banbridge and Craigavon Borough Council – who have assumed planning powers since the local government reshuffle – have asked the Department for Infrastructure to discontinue the turbine.

In a statement released last night (Thursday), a Council spokesperson said: “A Special Meeting of the ABC Council was held tonight to consider requests made to Council to revoke the planning permission granted by the former Department of the Environment (DoE) for a wind turbine development at Knock Iveagh in 2013.

“Additional requests were also considered in relation to discontinuing the use of the Knock Iveagh site for wind energy generation, and the removal of the existing turbine development on the site.

“Due to the complexities of this case, it was necessary for Council to thoroughly investigate and consider this matter in detail to enable it to make a decision. This required input from a range of specialists which inevitably meant the matter taking longer than would have been hoped.

“At tonight’s meeting Council agreed that the turbine development is having an adverse environmental impact on the integrity of the setting of the scheduled monument at Knock Iveagh and the visual amenity and landscape character of the site.

“As a result the council will now be writing to the Department for Infrastructure requesting that it uses its legal powers under Section 75 of the Planning Act to discontinue the use of the land for wind energy generation, and to specify steps for the removal of the turbine and works at the site or exercise its powers of enforcement in respect of an apparent unauthorised development at the site and requesting that the Department for Infrastructure exercise its powers of enforcement before exercising its powers under Section 75 of the Act.

“Council will also be seeking full reimbursement for all associated costs attributed with this process.

“This decision is now subject to Council’s normal call-in arrangements, and therefore no further comment will be issued during this time.”

The Save Knock Iveagh campaign group reacted to the news by saying: “We are all delighted that our local councillors have now joined us in calling for the removal/revocation of the deeply damaging development at Knock Iveagh. We have more work to do now!”

Alliance Councillor Eóin Tennyson has said it is now incumbent on the Department of Infrastructure to use their powers of enforcement or discontinuance to address the erection of a wind turbine on the site of a scheduled monument at Knock Iveagh, and to meet any costs associated with this process.

Councillor Tennyson commented: “The site at Knock Iveagh dates back 5,000 years, is regionally significant and home to a neolithic scheduled monument. It is of the utmost importance that we act to protect and preserve the historical site.

“The Historic Monuments Council which advises the government on protected monuments has been clear that the turbine should be taken down, citing the adverse impact on a historical setting.

“The original application to erect a wind turbine there was passed following an apparent failure of the then Department of the Environment to consult with archeological experts.

“Since then, the Planning Act has been implemented devolving planning responsibilities to local councils. This has created an invidious position whereby ratepayers in Armagh, Banbridge and Craigavon could potentially be left to pick up the cost of failings of a Stormont department seven years ago.

“This is clearly an unfair and totally unacceptable situation, particularly given that the cost of rectifying the matter could be extensive and local government is already facing huge financial pressures.

“ABC Council has now provided clarity on the matter: stating that the turbine is having an adverse impact on the integrity of the monument and on the visual amenity and landscape of the site.

“It is now incumbent on the Department of Infrastructure, as the successor to the Department of the Environment, to use their powers of discontinuance or enforcement to finally bring this matter to a close and for the Executive to ensure any financial burden does not unfairly rest with the residents of Armagh, Banbridge and Craigavon.”

The South Down MP, who has been campaigning alongside local residents for several years has said this is a potential “watershed moment” in the ongoing campaign to protect this local site of national historical significance.

“I welcome this cross-party decision from ABC Council to discontinue planning permission for a controversial wind tubrine site at Cnoc Úibh Eachach (Knock Iveagh) and echo their call for planning authorities to take immediate action towards discontinuing planning permission,” he said.

“Cnoc Úibh Eachach, or Knock Iveagh, is located in the ancient parishes of Drumballyroney & Annaclone; and was a focal point for some of the earliest tribe and clan communities in this part of Ireland.

“Indeed the name ‘Cnoc Úibh Eachach’ indicates that the site was considered the most important ‘cnoc’ or ‘knock’ in the historic kingdom of Iveagh. Historians believe that the summit was the likely inauguration site and ritual area for the Úi Echach Cobha tribe, and later the ‘Lords of Iveagh’, the prominent Magennis clan.

“A site of such unique and rich historical, ritual and archaeological significance should not be blighted by any form of development whose economic value is paltry compared to the unparalleled national significance of Cnoc Úibh Eachach, the ceremonial site at the centre of the ancient kingdom of Úibh Eachach Cobha.

“Sinn Féin will continue to work to protect this historic heritage site.”