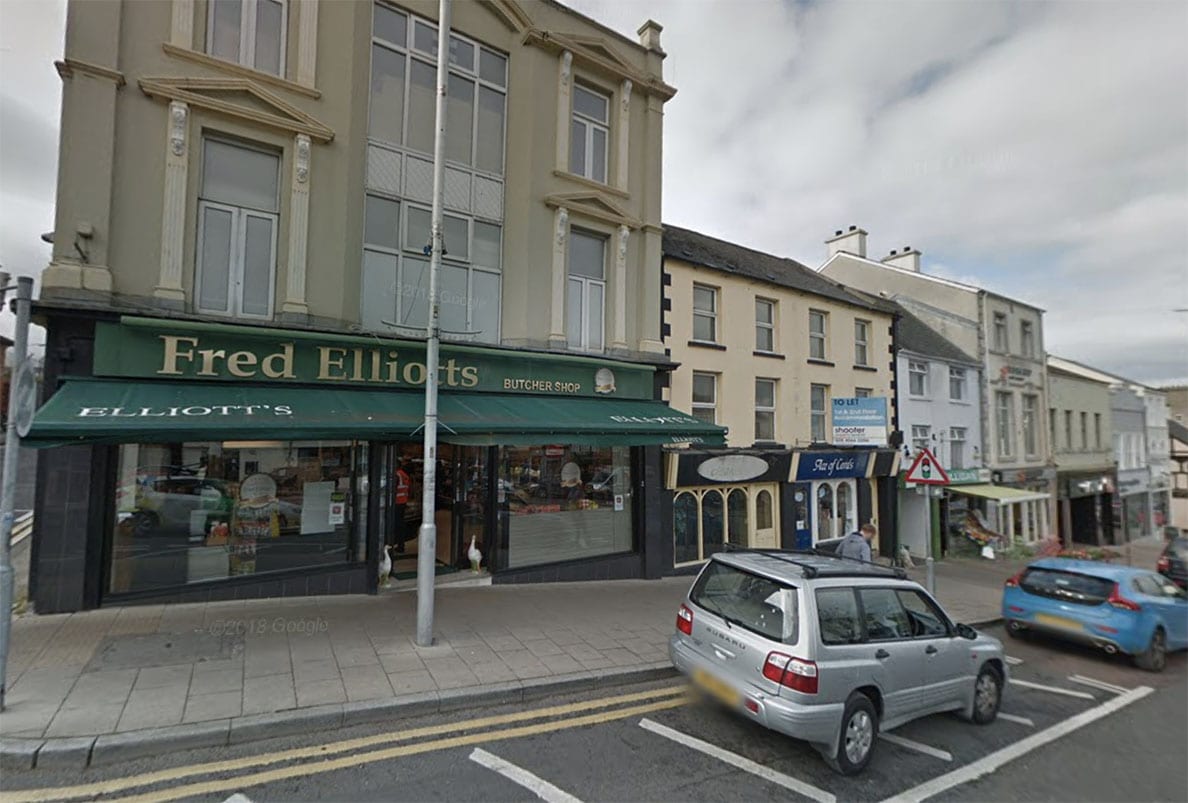 A long-standing family butchers is planning a major development – by opening an exciting new restaurant in the centre of Banbridge.

Fred Elliott family butchers and deli is located at 24 Bridge Street in the Co Down town.

But the butcher had previously brought forward plans to open a new restaurant – over two floors – on premises next door.

And now, Armagh I can reveal, they are about to be given the green light.

It will involve the demolition of the building at 26 Bridge Street.

Over £3 million worth of damage was caused to the town centre in a Real IRA car bomb attack – which injured 35 – just two weeks before the Omagh bombing.

The property in question was among those which suffered considerable structural damage in the blast on August 1, 1998, but was never properly repaired.

The three-storey building will now be replaced by a two-storey property to provide the town’s latest eatery, in what has been described as a “vibrant new restaurant”.

Plans for the ambitious development were brought forward almost a year ago.

There had been some issues raised in relation to the nature of the replacement building.

But McAdam Stewart Architects had responded in writing to Armagh City, Banbridge and Craigavon Borough Council.

They assert: “It is our opinion the proposed structure will make a more positive contribution to the character of the town.”

A more recent architectural report reveals that ‘tension rods’ are running through the floors, to tie the front and rear elevations together and “prevent the building collapsing”.

The architects point out: “The building suffered bomb damage in 1998. Many of the buildings near the explosion suffered damage to varying degrees.

“The most damaged buildings were torn down, however, buildings like ours on the periphery were damaged but never correctly repaired. The result is a building with a questionable structural integrity.”

The nature of the building is that certain areas of the upper floors have been ‘unlettable’ for some time now. One of the ground floor premises is also described as “currently unlettable” and that is a situation unlikely to change in its current form.

The building, as a result, has “an air of dilapidation”.

The architects’ report that the restaurant – if approved – would “add to both the day and night time economy”.

They also state: “We believe the public will benefit from the demolition and that replacement outweighs the argument for conservation, as the proposal will provide Banbridge with a vibrant new restaurant in lieu of a poor quality vacant building.”

Planning officials have considered the amended proposals submitted and are satisfied that the development should be allowed to proceed.

It would see the ground floor used for restaurant purposes, together with a food prep area and provision for an extension to the butchery alongside. The first floor would be solely for restaurant use.

The application has been recommended for approval and that is the opinion which will now go to the September sitting of council’s planning committee.

It the committee accepts that recommendation, it would then go to the statutory meeting at the end of next month to be formally ratified.