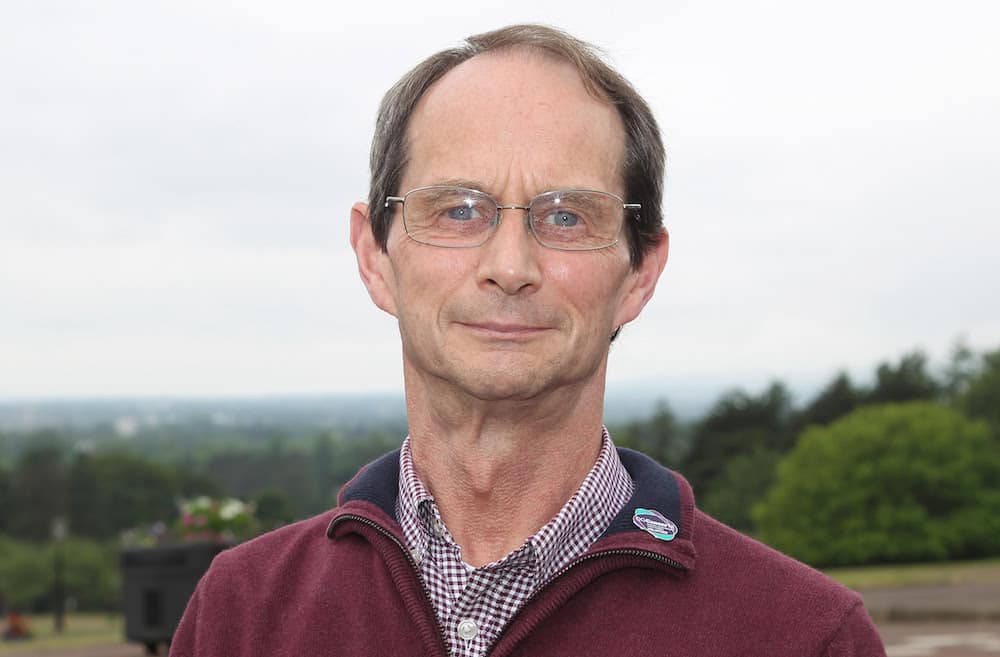 A Banbridge man had just completed a job for the Scout Association in Crawfordsburn when he found himself having some discomfort while eating.

Taking advice from a friend, Adrian Hale went to the doctor which is how his long cancer journey began.

The 51-year-old was diagnosed with oesophageal cancer in September 2018 and started the first round of three chemotherapy sessions in December. In March he had his surgery.

A married, self-employed agricultural engineer, Adrian also worked as a scout leader in his spare time. He has now set up a cancer support group in his local church, reaching out to people who are displaying similar symptoms and offering to speak with them.

“I hope this gives me the chance to support other people,” Adrian said and urged everyone around to be vigilant in spotting early symptoms.

“If you have symptoms, get to a doctor and hound them for an endoscope. It was a locum doctor who sent me for an endoscope after picking up the stomach ulcer on my notes,” he said.

Oesophageal cancer is found anywhere in the oesophagus, the so-called food pipe, that connects the mouth to the stomach. Its severity depends on location, size, patient’s overall health and whether it has spread already.

Cancer Research UK’s 2018 statistics show that there are around 9,300 new oesophageal cancer cases in the UK. In Northern Ireland, approximately 400 people are diagnosed each year.

“I personally know how important it is that this type of cancer is caught early,” said Stewart Dickson MLA, himself a survivor of oesophageal cancer.

Advising people on what to look out for, he warned that symptoms of oesophageal and stomach cancer include persistent heartburn or acid reflux that doesn’t go away, trouble swallowing, sudden weight loss, regurgitation or hiccups that do not go away.

Joining in the efforts to raise awareness of oesophageal and stomach cancer, Northern Ireland charity OG Cancer NI has just launched a new mobile campaign that will see their branded vehicle on the first of its many journeys across the nation.

The campaign aims to improve the prognosis of patients in Northern Ireland, by increasing public awareness of oesophageal cancer, and by encouraging people to notice the symptoms and seek advice from their GP at the earliest possible time before the cancer spreads.

Underling the importance to reach out to people who have never heard of the condition before, Consultant Upper GI Surgeon Mr Andrew Kennedy said: “As a surgeon treating patients with oesophago-gastric cancer, I cannot over-emphasise the essential role provided by OG Cancer NI to my patients.”

Four years after this shocking diagnosis and long treatment, Adrian agrees that such campaigns can make a real difference.

“I am at the youngest age of people who get oesophageal cancer – it can happen,” he said. “I was lucky enough to be in the minority percentage of people who were eligible for surgery because I was diagnosed early. If I see someone with constant heartburn, I will encourage them to get to the doctors.”

Welcoming the new initiative, Health Minister Robin Swann confirmed that early diagnosis is “vital” in fighting this disease. “For anyone who is concerned or worried, please speak to your GP.”

Kate Beggs, Northern Ireland Director of The National Lottery Community Fund, commented: “We look forward to seeing the difference the £100,823 National Lottery grant will make to local people, by raising awareness of the symptoms of OG Cancer through this dedicated campaign.”

According to her, thanks to National Lottery players, over £30 million is raised each week “for good causes like this” across the UK.

Backed by The National Lottery Community Fund, and further supported by Ford, OG Cancer’s mobile unit will cover both urban centres and rural areas of Northern Ireland, with the goal to provide essential support in hard to reach places as well.

The van will support those who are already being treated, who have recently received a diagnosis, and those who are worried about symptoms.

For Helen Setterfield MBE, Chair of OG Cancer NI, making sure that more people are aware of symptoms, is an important step forward.

“I was diagnosed with oesophageal cancer 18 years ago,” she said. “I am only here today as I was lucky to ‘catch it early’. This type of cancer is extremely aggressive, however. I have seen first-hand the difference in the cancer journey for patients diagnosed at an early stage.”

For Adrian, the exact diagnosis was a tumour right on the junction of his oesophagus and stomach. His treatment included several cycles of chemotherapy and surgery during which the majority of his oesophagus was removed from the top of his breastbone as well as the top third of his stomach.

Having left the tough battle behind, Adrian has personal advice to those who are undergoing the treatment now: “Try and get people to treat you as the person you always were. If you enjoy a laugh and a joke, get them to treat you as you were.”

He also puts emphasis on frequently underestimated aspects, saying: “Make sure your better half still has their identity too. Everyone asked how I was, but my wife was the one having sleepless nights. The carers often get overlooked.”

OG Cancer’s new mobile unit will be at Antrim Agricultural Show on July 23.