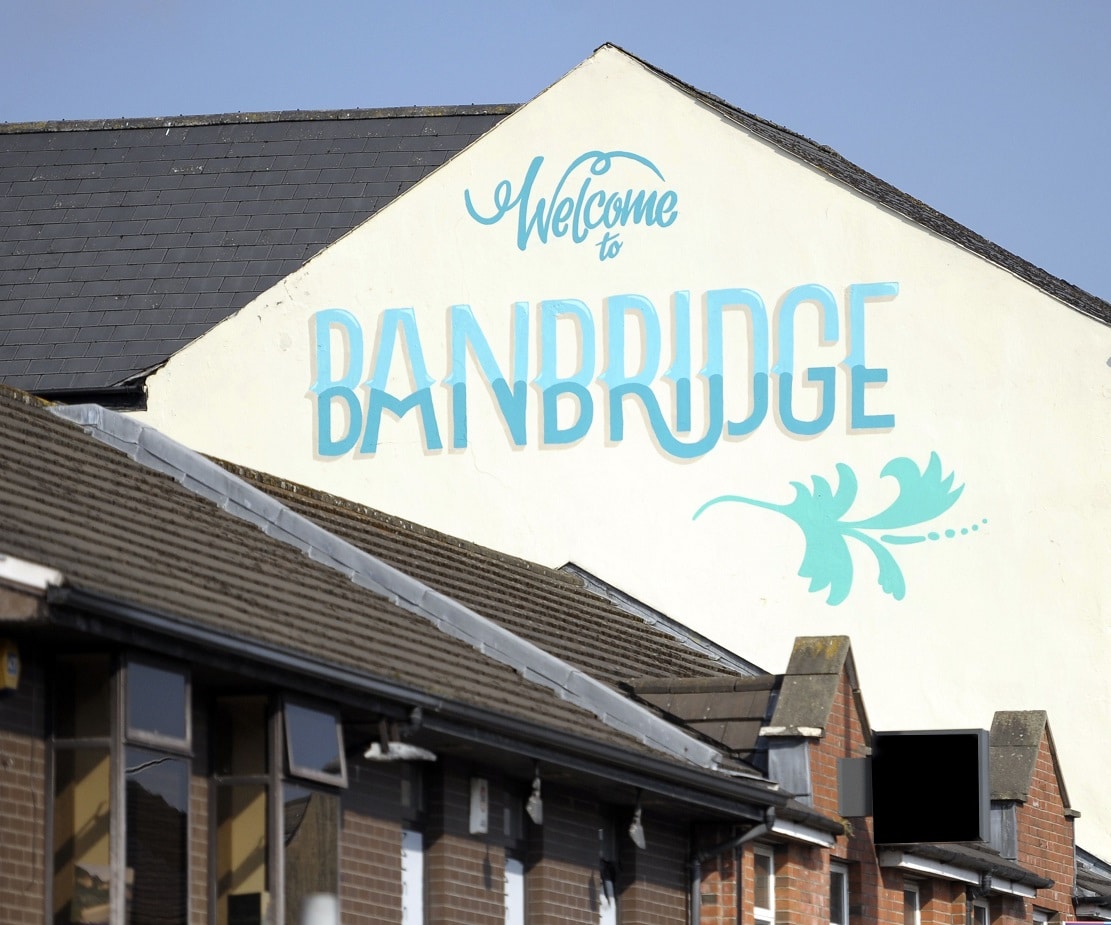 An exciting new street arts project injects colour and character into Banbridge while celebrating its rich heritage and transforming the town centre into a much enhanced, revitalised and more welcoming urban space.

ABC Council is delivering a wide range of town centre improvements as part of its Arrivals Project in a bid to enhance the town’s physical environment, improve its linkages and capitalise on the area’s tourism potential following the opening of the Game of Thrones Studio Tour.

Five highly acclaimed artists were commissioned to turn a key focal point in the town centre into a stunning work of art that celebrated the town’s history and heritage.

Speaking about this project, Lord Mayor Alderman Glenn Barr said, “Banbridge is a town on the up and the new street art positively reinforces this. I’m delighted that the local community is embracing and appreciating the bright, bold and thought-
provoking designs, which convey a story about bygone Banbridge.

“Well done to the artists involved in this project. Their creative and inspirational designs will help create a good first impression among international visitors coming to the area to experience the Game of Thrones Studio Tour. I am looking forward to seeing further regeneration work get underway in Banbridge as part of our Arrivals Project – all of which will create a high quality environment and support the town’s long-term economic and social prosperity.”

Irish-Singaporean illustrator and muralist Holly Pereira was inspired by the area’s unique connection to the Brontë family.

Her hand-painted ‘Welcome to Banbridge’ mural in Newry Street celebrates the Brontë link to the area using typography inspired by the world’s most famous literary family. Her mural in Downshire Place depicts an old woman who used to sell apples on the bridge and jingle the money in her pocket, giving it the affectionate local nickname Jingler’s Bridge.

The chrysanthemum damask design used was created by William Liddell and incorporates the distinctive pattern found on Jacquard loom punch cards, which were used to create the complex damask designs that made the Banbridge area world-famous for its linen. He won the 1951 Nobel Prize in Physics for his pioneering work on splitting the atom nucleus. Dublin-based Decoy’s mural at Scarva Street celebrates Banbridge as a strategic river crossing point, a communication route between Belfast and Dublin and a focus for agricultural industry, trade and commerce. An ancient king’s road connecting Ulster to the rest of the island once crossed the Bann at a forging place a short distance downstream at Ballykeel.

In addition to the new street art, one of Banbridge’s most iconic landmarks – a B1-listed monument dedicated to Captain Crozier which memorialises his contribution to polar exploration – has undergone significant restoration work.

The public art sculpture entitled ‘From the Bridge to the Bann’, which was installed at Kenlis Street in 2014, has also been restored to its former glory by the original artist.

The council has secured funding from the Department for Communities to deliver the new street art, restore the monument and sculpture and support a wider regeneration programme in the town as part of its Arrival Project.