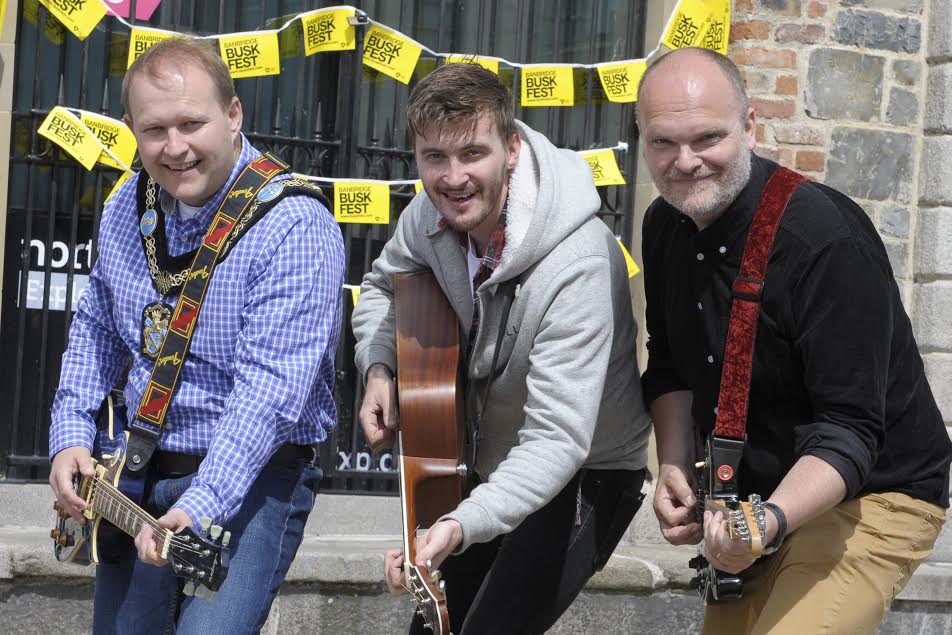 Lord Mayor Gareth Wilson recently took to the streets of Banbridge to sing the praises of Buskfest, the borough’s internationally reknowned busking festival, which this year will take place on Saturday, August 12.

Now in it’s 14th year, Buskfest has gone from strength to strength attracting singers, musicians and entertainers from across the globe who perform to huge crowds on the streets of Banbridge Town Centre all with the hope of taking away a share of the amazing £3000 prize pot.

Speaking at the launch the Lord Mayor said: “Buskfest is a superb event which  showcases the wealth and diversity of musical talent and performing skills thriving from the local area and further afield. Not only does it offer a wonderful platform for musicians to perform it provides a fantastic day out in Banbridge.

“With over 6000 visitors enjoying the atmosphere last year many of our local shops, restraunts and cafes also benefit from this annual musical extravaganza.”

BBC Radio Ulster presenter and Buskfest judge and compere Ralph McLean offered some words of encouragement for anyone interested in signing up for the popular competition.

He said: “Without doubt Buskfest is one one the finest examples of how a simple idea of giving musicians the opportunity to play in public has grown into a superb international annual event. It firmly puts the performer into the public spotlight offering great opportunities to help develop their musical career and I would encourage any performer whatever your age, experience or genre to give it a go.

“If busking put Ed Sheeran on the path to global stardom it can work for you too.”

During the competition, which will run from 1pm – 4.30pm participants can compete in a number of categories, including overall winner, best individual, best band, best junior, best performance and the ‘Spirit of BuskFest’ prize. As well as a colossal cash prize the overall winner will also be given the opportunity to record a live acoustic video produced by The Garage Project.

For further information and to register go to www.buskfest.com or check out Facebook at www.facebook.com/buskfest. Online registration will remain open until 2pm on Friday, August 11.