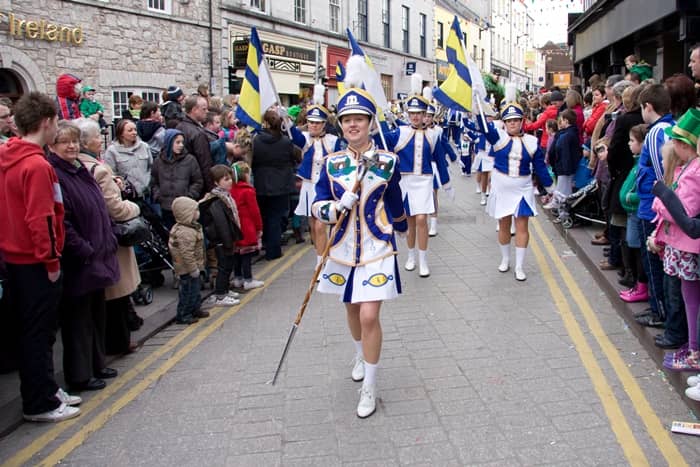 ARMAGH’S two traditional St Patrick’s Day parades are to be merged into one this year which, with one city councillor saying it will serve up a cultural feast for all to enjoy.

Sinn Fein’s Cathy Rafferty chaired the committee responsible for organising the big parade, with officers instructed from the outset to work very hard with community organisations to try and encourage a ‘joined-up’ celebration.

She had asked them to encourage the amalgamation of the smaller morning parade, traditionally made up of youth and church-based organisations, with the afternoon parade, organised by the City Council and open to all groups, businesses, sports clubs and more to take part in.

Councillor Rafferty said she had met with a number of organisations, all of which felt “one big parade” would be more beneficial for Armagh and provide a more memorable experience for visitors and participants alike.

And she was delighted to report that agreement had been reached for a single celebration encompassing all.

The Sinn Fein representative said that Armagh’s celebrations of St Patrick – with an exciting and diverse 10-day festival lined up – could stand up proudly against any other city’s plans!

In addition, with Armagh having voted to hold the parade on the Sunday, March 17 – on St Patrick’s Day – it is the aim to attract visitors from other areas to come and join in the fun.

“We want to capitalise on the fact that some other cities are having their parades on the Saturday or the Monday, so we hope to attract people from all over the island,” added Councillor Rafferty. “We are looking forward to welcoming all cultures and denominations to the city on St Patrick’s Day and throughout the festival week.”

Indeed, it is being billed as the biggest festival ever, with up to 20,000 visitors expected to arrive in Armagh!

From Friday, March 8 to Monday, March 18, visitors of all ages can enjoy a fantastic programme of events, transforming the city centre with music, song, dance, storytelling and much more.

To launch the festival, international singing sensations The Three Priests will return to the spectacular setting of St Patrick’s Roman Catholic Cathedral on Friday, March 8.

The following day there will be an afternoon of live music in the city centre, as traditional Irish folk band Raglan take to the outdoor stage.

Yarn spinning and Irish stew will be served up on Friday, March 15, as The Bards of Armagh provide a unique night of storytelling, music and uproarious laughter.

From Friday to Monday, March 15 to 18, visitors will be immersed in a weekend of culture and craic with a series of traditional music sessions planned in the city’s first trad trail.

On Saturday, March 16, musicians, bands and unsigned singers from all over Northern Ireland will head to Armagh for the annual busking festival.

There will be plenty of family fun in store as Armagh bursts into life in a spectacular display of colour during the annual St Patrick’s Day carnival parade on Sunday, March 17.

The parade will feature marching bands, walkabout characters, colourful floats, dance performances and music, to create a celebratory atmosphere for the whole family to enjoy.

The celebrations continue with an afternoon of free entertainment headlined by legendary band ‘More Power To Your Elbow’. A funfair will also take place from Saturday to Monday, March 16 to 18.

The festival continues until Monday, March 18, with a musical performance from The Ulster Orchestra in St Patrick’s Church of Ireland Cathedral.