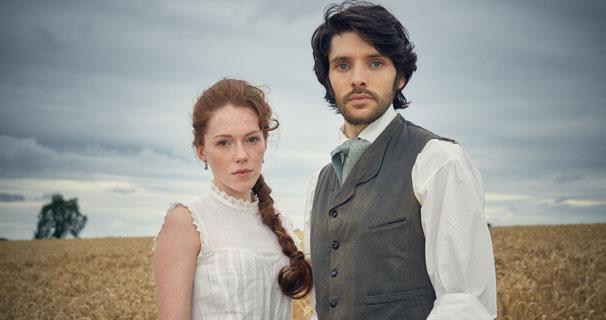 Armagh’s Colin Morgan has been confirmed to take the lead in a new BBC prime time supernatural drama.
Filming has started in the West Country on The Living And The Dead, which will consist of six hour long episodes written by Ashley Pharoah and Matthew Graham, co-creators and writers of such audience-pleasers as Life On Mars, Ashes To Ashes and Eternal Law.

Colin, a former student of the Integrated College Dungannon, began his TV career in the lead role of Merlin for the BBC.

And he has just enjoyed a fantastic run in futuristic sci-fi drama Humans, which Channel 4 commissioned for a second series after it drew in the channel’s biggest audience in 20 years.

This new BBC was commissioned by Charlotte Moore, Controller BBC One, and Ben Stephenson, Controller BBC Drama Commissioning. It is a BBC Wales Drama production in association with Monastic Productions and co-produced with BBC America.

It is set in Somerset in 1894 and a house that’s almost as old as the English countryside itself.

A brilliant young couple inherit the farm and are determined to start a new life together. But their presence in this isolated corner of England starts to unleash strange, unsettling and dangerous supernatural phenomena that will start to threaten their marriage.

This is a drama steeped in the eeriness of the rural world at the moment when the industrial revolution came crashing in to disrupt all the old certainties. It is uncanny, intriguing, disturbing and at the series’ heart is the love story of Nathan and Charlotte Appleby: deeply in love with each other but put under extraordinary pressure, they will have to fight to save their marriage and their home in a land of ghosts and myths, poltergeists and demons – if there was ever a time for those ghosts to rise out of the ground, this would be that time.

At the heart of this small community is Nathan Appleby – played by Colin – a reluctant gentleman farmer who is obsessed with proving the existence of the afterlife.

In this new and original drama this complex and compelling man will investigate hauntings, paranormal happenings, and ghostly visitations, encouraged by the Society for Psychical Research.

But as these terrifying investigations become ever more frequent and ever more scary, Nathan starts to see and hear disturbing things that he simply cannot have imagined. Will Nathan’s interest in the occult begin to threaten his family, his livelihood and even his sanity?

They are an award-winning combination with huge public appeal; Charlotte was BAFTA nominated for Best Supporting Actress in 2015 while Colin won a National Television Award for Most Popular Male Drama Performance in 2013.

Colin is obviously excited by the prospects. “The Living And The Dead is one of those scripts that you read and are instantly compelled and engaged by,” he said.

“It’s intelligent, chilling and engrossing. It’s going to be very special and I can’t wait to start working on it with the wonderful creative team.”

Writer Ashley Pharoah added: “I am completely thrilled that Colin and Charlotte are joining us on our adventure. The characters they play – Nathan and Charlotte Appleby – dominate the series and I couldn’t be more excited to see what they do with them.”

Faith Penhale, Head of BBC Wales Drama Production, said the partnership of Colin and Charlotte is ideal for the drama.

“Colin Morgan and Charlotte Spencer are two of Britain’s most exciting and talented stars and I can’t think of anyone better to bring to life Nathan and Charlotte Appleby, the beautifully drawn couple at the heart of Ashley’s bold and brilliant new series for BBC One,” she said.

The show will be distributed internationally by BBC Worldwide and filming has now started.

Writer-creators, Ashley Pharoah and Matthew Graham, said: “We are as excited about this show as anything since Life On Mars and Ashes To Ashes – we want it to be moving, tender, sensual… and very, very scary.”