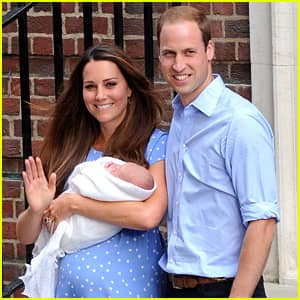 POLITICIANS and church leaders in Armagh have extended their congratulations to TRH The Duke and Duchess of Cambridge on the birth of their first child, George Alexander Louis.

Archbishop of Armagh, the Most Revd Dr Richard Clarke, sent his “sincere good wishes” with those of many in the Church of Ireland and beyond to the Duke and Duchess.

“The safe delivery of any new baby is a time for rejoicing and thankfulness for the parents and family and, indeed, for a wider community,” he said. ” I take this opportunity to wish the Duke and Duchess well as they assume the enormous privilege and responsibility of parenthood, and I pray that they will be blessed by God in cherishing their son and encouraging him in faith, and in the ways of truth and of love.”

It was a chance in a lifetime for Alderman Moutray and American visitors Pam and Sarah-Britton Vaughn, the guests he is currently hosting in Craigavon.

He said: “I have been hosting Pam and Sarah-Britton throughout the duration of their vacation in Craigavon. It happened to be that we had booked to travel to London to enjoy some of the tourist destinations on Monday and, given that it was the very day that the Duchess of Cambridge would give birth to our future King or Queen, we travelled to the hospital to soak up the atmosphere.”

Alderman Moutray added: “I am absolutely delighted for Prince William and the Duchess of Cambridge and would extend my best wishes to them as they seek to bring up their little boy.”

“On behalf of the people of the Upper Bann constituency I extend our warmest congratulations to the Duke and Duchess on the birth of their son, our future King,” he said. “I am delighted to hear that mother and baby are doing well. It has given the nation tremendous joy.”

The Duke and Duchess of Cambridge  announced yesterday (Wednesday) that their newborn son is to be called George Alexander Louis. He will be known as His Royal Highness Prince George of Cambridge.

The announcement at 6.20pm showed the couple have chosen to stick with very traditional royal names. There have already been six British monarchs called George – the last being the Queen’s father, George VI. Louis is also a favourite and was the name of Lord Mountbatten, the uncle of the Duke of Edinburgh.

The announcement came a day after the Duchess left hospital and two days after she gave birth, and hours after the Queen met her great-grandson for the first time.