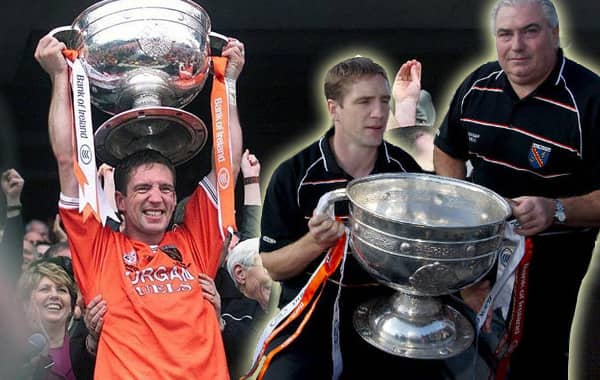 It’s a well-known fact that Joe Kernan’s half-time speech in the 2002 All-Ireland final was the catalyst for Armagh to go and claim their one and only Sam Maguire to date.

It’s also widely understood that he produced a runner-up medal, but it was in fact a plaque, something described by a team member as something you’d win at an ‘U12 Blitz”.

Armagh were trailing Kerry 0-11 to 0-7 and the game looked all but over for the Orchardmen. It looked to be a repeat of the 1977 final heartbreak once more; a final Kernan himself played in.

But not to be undone as a manager, the Crossmaglen man stirred his team with one of the greatest speeches ever delivered in a dressing room.

Alongside assistant Paul Grimley, he helped orchestrate a second half change in tactics.

Full back on the day, Justin McNulty, speaking to Armagh I, explains exactly what happened next.

“Joe then held up his plaque that looked like something you’d win at an U-12 blitz.

“He showed it around and asked, ‘do you want one of these?’

“At which point he said calmly and with massive conviction, ‘I’ll tell you what you can do with this!’

“And smashed it into smithereens off the walls of the showers, with major dramatic effect.

“He then very calmly and very assuredly said, ‘or, do you want one of these? Raising an original All-Ireland medal and showing it around.

“It was like Joe turned on the trip switch for the team. Most people thought we were gone after half time. But we didn’t.”

McNulty continued: “Eamonn Mackle had bought medal at an auction for Joe. Mackle was part of backtoom team. The ‘go to guy’ who got things done.”

And the fifteen minute interval (give or take the five minutes they left the Kerry team waiting on the pitch), was one of the most inspiring.

“I had prepared myself mentally for a close finish. I was ready for a dog fight,” McNulty added.

“However, what Joe did at half time was like pouring jet fuel onto the fire of my determination. It was the most incredibly powerful, planned and masterfully executed pep talk I ever experienced as a footballer. Especially in the context of the moment we were in.”

Brother Enda, was also corner back that day, now works as a sports psychologist.

He recounted the tale in John Scally’s book ‘Blood, Sweat, Triumph and Tears: Tales from the GAA’.

“I remember looking around the dressing room and thinking the mood in the team wasn’t unbelievably spirited and the body language wasn’t very strong.

“Joe came in and he started talking – ‘Listen boys, we weren’t playing well. I played in the 1977 All-Ireland final and I remember going home on the bus crying and with all the boys crying. Do you want to f***ing be like me?’

“It wasn’t really what he said next, but the impact of him physically throwing his loser’s medal from that game against the shower and it rattling all over the wall, shattering into little pieces and the plastic breaking and the coin, or whatever it was, rolling all over the floor.

“I again vividly remember looking around and seeing the body language change immediately.”

Armagh limited Kerry to three second half points and that Oisin McConville goal helped Kernan’s men to an amazing 1-12 to 0-14 victory.