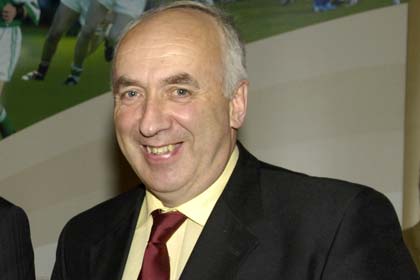 Tributes have been paid to former Secretary of the GAA in Ulster Danny Murphy who passed away at the age of 67.

He stood down from his role earlier this year because of ill health but was to officially remain in post until February 2017.

Justin McNulty MLA has paid tribute “a giant in the world of Gaelic games, both in Ulster and across the globe”.

“He was an outstanding administrator, and a man of integrity and of vision.  He was a great Irishman,” said Mr McNulty.

“Danny was a quiet warrior, a man who got things done without fuss, a man who brought people along with him. His fingerprints are all over everything that is great about the GAA in Ulster and further afield.

“He was Provincial Secretary during Ulster’s glory days, and Ulster clubs and counties flourished under his leadership. Danny had a great vision for the association and its future development in Ulster, and was doggedly determined to deliver strategically on that vision.

“He was instrumental to ensuring the Ulster GAA set up its permanent home in Armagh City.

“Such was his dedication, I met him just a few short weeks ago in Stormont, with his Ulster GAA colleagues.

“Danny will be greatly missed by all who knew him and I send my sympathies to his family and to his colleagues, his former teammates, and his friends near and wide for they have lost a great Gael.”

Party colleague Sharon Haughey-Grimley, who had close links to Ulster GAA, spoke of her sadness at the news.

“I am absolutely devastated to hear of the death of Dr Danny Murphy,” she said.

“Danny was a leader of men, enriching the Gaelic Athletic Association and our lives more than he will ever know.

“He was an advocate for ensuring the GAA was for all and his tireless work breaking down barriers and developing good relations will be a strong legacy for the great man he was.

“He was a changemaker, who believed in peace and democracy and sport playing an important role within all of that. He was a leader and a friend. He will be so sadly missed by all of us who had the privilege to know and work with him.

Cathal Boylan MLA said: “Sad to hear of the passing of Ulster GAA stalwart Danny Murphy, thoughts and prayers are with his family.”

The Ministers said: “Danny Murphy made a colossal contribution to sport over many years and his death will leave a massive void.

“In June of this year we held a reception for Danny in Stormont Castle to acknowledge his contribution to sport and community relations.

“Danny was surrounded by his family and many friends and we are so glad we had the opportunity to personally thank him for his years of dedication and progressive approach.

“Our thoughts and prayers are with his family and friends at this difficult time.”

Newry and Armagh MP Mickey Brady also extended his sympathies to the family.

He said: “On behalf of the people of Newry and Armagh I extend sincerest  sympathies to the family, friends and his fellow gaels of Cumann Lúthchleas Gael.

“Danny Murphy was a committed GAA activist all his life and his various roles throughout that packed life has helped not only the Association but our communities in general.”

His colleague Newry and Armagh MLA Conor Murphy, echoing the MP’s comments, added: “I am genuinely sorry to learn of the death of Danny. His leadership, vision, dedication and integrity earned the highest of respect from us all.

“He also worked in a quiet but focused way to help in the areas of reconciliation and healing. He will be widely missed by us all. Deepest sympathies to his family. Ar dheis Dé go raibh a anam.”