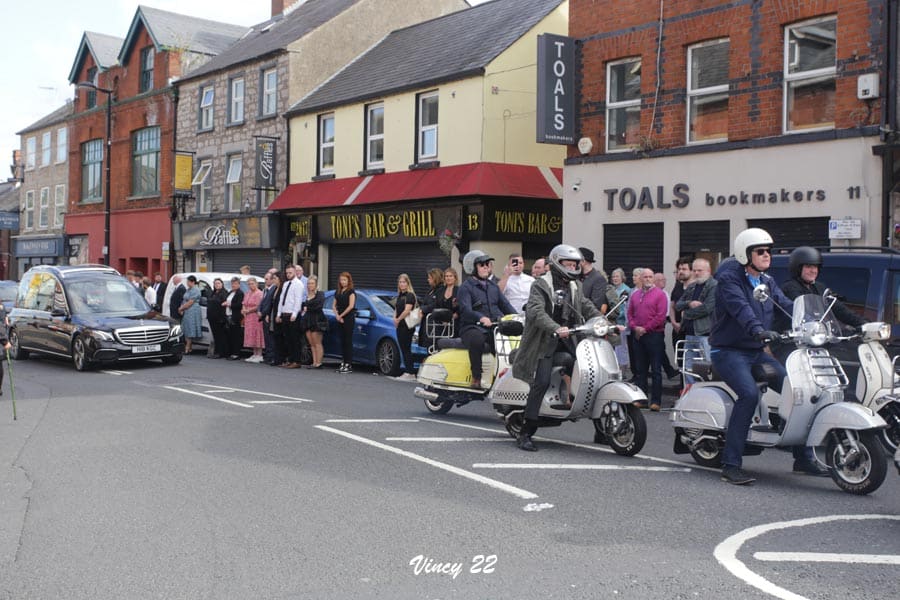 Mourners at a thanksgiving service for the life of Armagh businessman Tony Hughes today (Tuesday) heard him remembered as a man who “made a difference in our community and in our world”.

Tony, who lived at Folly Lane, died suddenly on Thursday.

As the funeral cortege made its way to St Patrick’s Cathedral, it paused for a minute outside Country Armagh Golf Club, where Tony ran the Parkland Restaurant.

Members of staff stood in tribute, along with members of the public, while riders from Armagh City Scooter Club, of which Tony was a member, led the procession.

At the service, Fr Peter McAnenly was joined on the altar by Deacon Paul Mallon and Rev Malcolm Kingston from St Mark’s Parish Church, Armagh.

Fr McAnenly said there was a “great sense of shock and sadness within the community” when news filtered through of Tony’s sudden death and that many are still trying to come to terms with it. And he said the Hughes family were very keen to ensure the service was one of thanksgiving, “for the many lives that he touched and all that he achieved over the years of life”.

Tony had a wealth of experience in the hospitality industry and in recent years had run Viva Bar and Toni’s Bar and Grill in the Shambles and just about 18 months ago, he opened the Parkland Restaurant. “It’s worth noting that he took on his latest challenge, the Parkland, in very difficult times. We were in the midst of a pandemic, at the time when many businesses were looking towards closure, but Tony rose to the challenge and in recent months it was a business that was really thriving, and indeed going from strength to strength.

“.. As many have said, he gave it his all, a man who was very much hands-on, someone who lived and worked and effectively died on his feet. I know that many of you, his staff, have been left devastated as a result of his passing.

“And as some of you said the other day, Tony wasn’t just your employer, but for many he was also a friend and a colleague. A couple of the staff were saying to me the other day that he was never afraid to roll up his sleeves and get stuck in when work needed to be done. Always ready to give a helping hand and he always encouraged young chefs into the industry.

“And so for years to come, he will be remembered not just as a respected businessman,  he will also be remembered as someone who contributed much to the life of the city. And in and through his businesses, he helped make Armagh a better place for all.” Fr McAnenly said Tony was renowned for his love of music and that the Northern Bar hosted some of the country’s greatest bands during the years he worked there. He was also instrumental in helping develop the city’s blues festival.

He had a great interest in road bowls, through which he made many friends, had a passion for the Irish language, took an interest in politics and travel and loved his four dogs, which he referred to as his ‘therapists’.

“So all in all, he was a man who lived life, he loved life, someone who packed much in over the years,” said Fr McAnenly.

His kindness and charity to those in need was also recalled, including how he gave free meals to people in Armagh and on the streets in Dublin, as well as supporting children in Chernobyl. A private cremation followed at Lakelands Crematorium in Cavan.