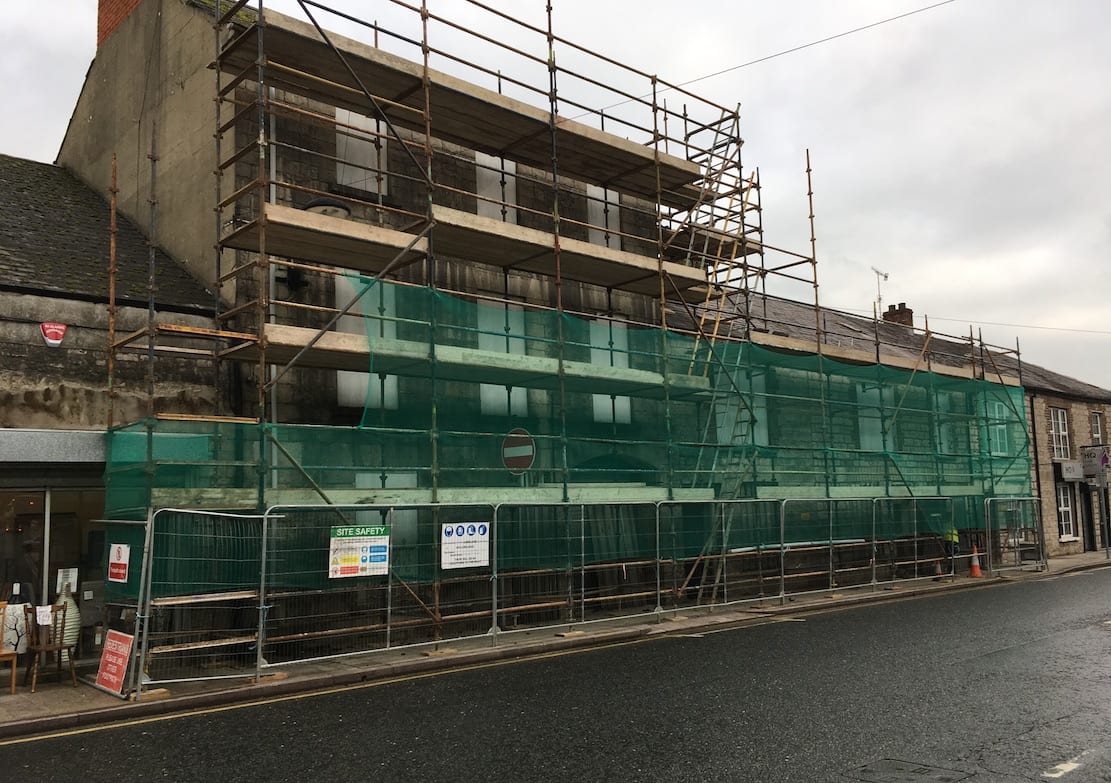 Two long-boarded up properties – proud examples of Armagh’s architectural heritage which have sadly fallen into serious disrepair – are getting a major facelift.

Work has started this week on the side-by-side buildings at Dobbin Street.

The project will see “the restoration of the front facade with the erection of a new shop front”.

Scaffolding has gone up around the city centre site – next to Martin’s Discount Stores – as the task begins.

Both properties, numbers 21 and 23, are historic buildings and have enjoyed listed status because of their architectural merits.

But they have been left idle – windows boarded with plywood – despite the potential which exists.

A raft of properties across the city centre will be brought back into productive use under a major townscape heritage initiative operation.

But as Armagh I reported in January, the Ulster Architectural Heritage Trust identified 11 buildings which had not been included under Lottery Fund programmes in Armagh and Lurgan which it deemed as being at “high risk” and urgent attention.

One of those was number 23 Dobbin Street.

UAHS said the building’s main front entrance had been boarded up and had been vandalised.

A report to council suggested redevelopment into apartments, including the rear outbuilding; or similarly “converted for retail use”.

Just last month, Armagh City, Banbridge and Craigavon Borough Council granted listed building consent for improvements to be made to the facade of the two buildings.

The successful application for the work – in the name of Radius Housing – paved the way for workers to arrive en masse this week to kick-start a new future for these neighbouring structures.

The agent behind the project is the renowned Belfast-based Kriterion Conservation Architects.

The intention is for refurbishment of the external surface to “visually improve the existing front facades”.

According to the development management officer’s professional report, the properties are described as a three-storey mid-terrace property, with an adjoining two-storey property.

Both buildings – which fall within the Armagh Conservation Area – were listed in June 1975, although number 21 was ‘delisted’ almost a decade later, in January 1985.

The work will include roof slates being cleaned, gutter and ‘down pipe’ being replaced with “heritage aluminium rainwater goods in black”.

Windows will be replaced, walls steam cleaned and repointed where necessary with lime mortar, cills will also be cleaned, and doors replaced with red-painted hardwood doors.

An existing decorative metal railing to the ground floor of number 23 will be cleaned and redecorated in black.

A roller shutter to the entry will be replaced with wrought-iron double gates, painted black, and a solid hardwood tongue and groove behind, which will be painted red.

The exposed gable to either end of number 23 will be “scraped down, repaired and redecorated”.

The development management officer’s report says officers believe the proposal “enhances the area” through the “sympathetic refurbishment of the facade and removal of the metal shutters”.

The report adds: “Officers, in consultation with Historic Environment Division, are of the opinion that the works proposed will retain the essential character of the listed structures along with the features of special interest.

“Damaged features of importance will be repaired using traditional methods and materials. Where it will not be possible to retain features due to the deterioration of the fabric of the property, these are to be replaced using replicas made using traditional materials and techniques.

“Where new elements are to be incorporated, these have been designed in materials which are considered to be sympathetic to the existing fabric.”

This will see the start of boarded-up and vacant properties in Armagh City Centre being afforded a little TLC to bring them back to their glory days. More works – under the townscape heritage funded scheme – should begin next year.