'One cannot imagine how frightened these two women must have been, being hit by a lorry and then by another car' 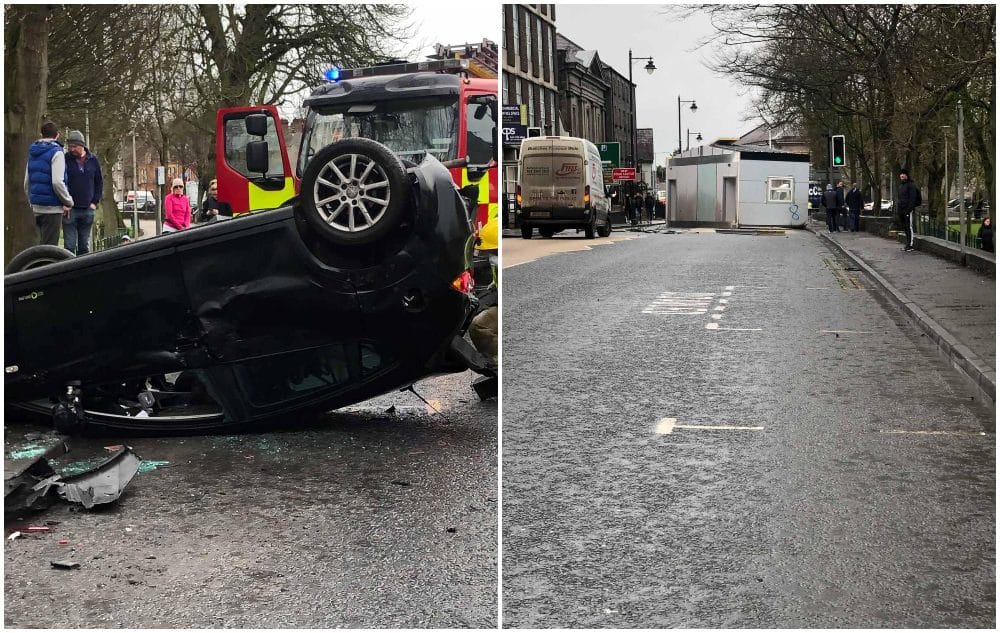 A Dungannon man convicted of dangerous driving, which resulted in a lorry shedding its load and car being overturned in Armagh city centre, has been sentenced to three months in prison suspended for two years.

Referring to the Seat which was left on its roof, the district judge told the 42-year-old: “One cannot imagine how frightened these two women must have been, being hit by a lorry and then by another car.”

The charges relate to an incident on January 11, when a lorry carrying a pre-fab cabin shed its load on Mall West.

Court previously heard that the cabin had been shed after being dislodged by the branches of trees.

Damage was caused to a wall on the Mall and three other vehicles during the incident.

Prosecution stated that the defendant drove into a Seat Leon which in turn collided with a Caddy van and it into a Ford Fiesta. Donnolly was then reported to have driven on, with District Judge Bernie Kelly questioning his reason for doing so.

Defence barrister Patrick Taggart stated there was no answer.

He explained: “He continued on to the Newry Road, then he thought better of it and as he was turning around in the wide hard shoulder police arrived.”

He said that in the interview with police his client had appeared “distraught” by the incident.

Speaking on Tuesday, Mr Taggart stated that the court had been furnished with a “detailed” report from probation for which he was “grateful to the author”.

He commented that the case was “clearly” one of dangerous driving and that Donnolly was “extraordinarily fortunate the injuries were not more serious”.

Mr Taggart added that this was “totally out of character” for his client and it had “significantly affected him”.

District Judge Kelly stated: “Mr Donnolly, you are or were what is referred to as a professional driver….at the time of this incident you were carrying quite a large piece of freight.

“The public expect an even higher degree of care from lorry drivers. A lorry can cause far more damage that a small car.”

Referring to the Seat which was left on its roof, she said: “One cannot imagine how frightened these two women must have been, being hit by a lorry and then by another car.”

Donnolly was sentenced to three months in prison suspended for a period of two years and a disqualification from driving for 12 months.