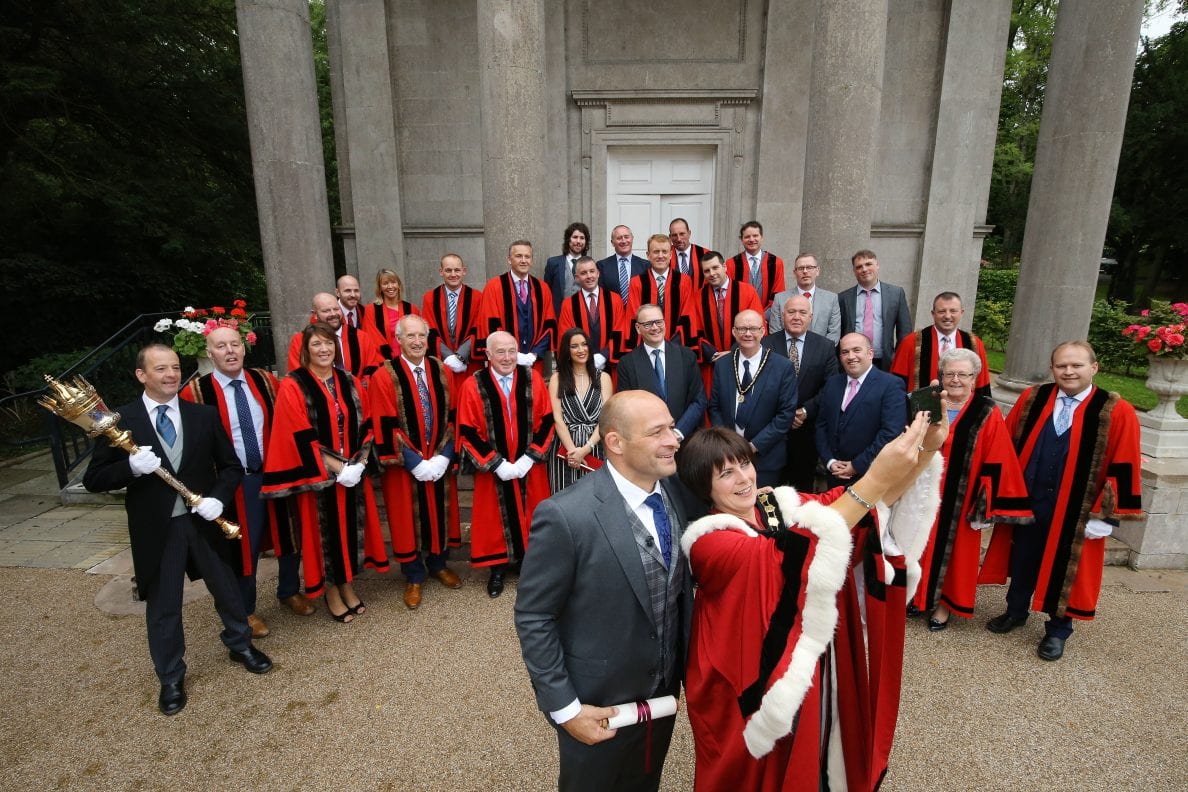 Lord Mayor Julie Flaherty grabs a selfie with the man of the moment Rory Best, as councillors and alderman in their ceremonial robes and invited guests look on.

Some of the biggest names from the world of rugby union gathered today at the Archbishop’s Palace in Armagh along with friends and family of Rory Best to witness him being conferred the Freedom of the Borough.

The Lord Mayor, aldermen and councillors awarded the honour to the Ulster, Ireland and Lions rugby star – only the second-ever granted – to recognise his huge contribution to both sport and the community in the borough.

As well as family and friends of Rory Best and members of council, attendees included rugby stars Conor Murray, David Wallace, Mike Ross and Andrew Trimble, and a host of others.

Said Rory: “To receive the Freedom of the Borough is such a great honour, particularly as it comes from the area where I grew up, where I learned my rugby and where I live.

“This borough has given so much to me over the years and I am thankful to everybody who has helped me throughout my rugby career so far.

“I would like to thank the council for considering me for this honour and for arranging today’s very special event.

“I have had the privilege to take part in some memorable sporting occasions and today’s will live long in the memory with the best of them.”

Earlier in the day Rory attended a special Festival of Rugby held at City of Armagh Rugby Club made up of teams from clubs across the borough including Banbridge RFC, Dromore RFC, Lurgan RFC, Portadown RFC and City of Armagh RFC, as well as rugby neighbours Dungannon RFC and Monaghan RFC.

Portadown Panthers opened the festival with an exhibition game of tag rugby, of which Rory is the club patron.

Lord Mayor Julie Flaherty said: “Today has been a real celebration of Rory Best’s sporting achievements and the contribution he makes to our borough.

“He thoroughly deserves the Freedom of the Borough honour and we could ask for no better example for our young people to follow, both on and off the pitch.

“The fantastic turnout from the world of provincial and international rugby is testament to the regard with which Rory is held in the professional game, as are the tributes from some of the stalwarts of the game.”

Dr Rory Best OBE received the Freedom of the Borough of Armagh City, Banbridge and Craigavon in recognition of his outstanding sporting achievements of a local man who was raised and educated in Poyntzpass and went to Tandragee Junior High and Portadown College.

He played rugby for Banbridge and his wife Jodie teaches in The Armstrong Primary School, Armagh.

Rory has won a raft of honours in the rugby world, including captaining Ulster, Ireland and the British and Irish Lions; earning more than 100 caps for Ireland and more than 200 for Ulster; leading Ireland to a third Grand Slam and Triple Crown in 2018; also leading Ireland to historic wins over the New Zealand All Blacks, South Africa and Australia and being part of the Ulster side which reached a Heineken Cup final in 2012.

As part of the Freedom of the Borough celebrations, some of Rory’s most memorable items from his playing career are on display in a special exhibition in the Archbishop’s Palace in Armagh