‘Scum of the earth!’ Burglary victim hits out as house is ransacked in 15-minute window

Owner says she doesn't know how she'll get over the burglary 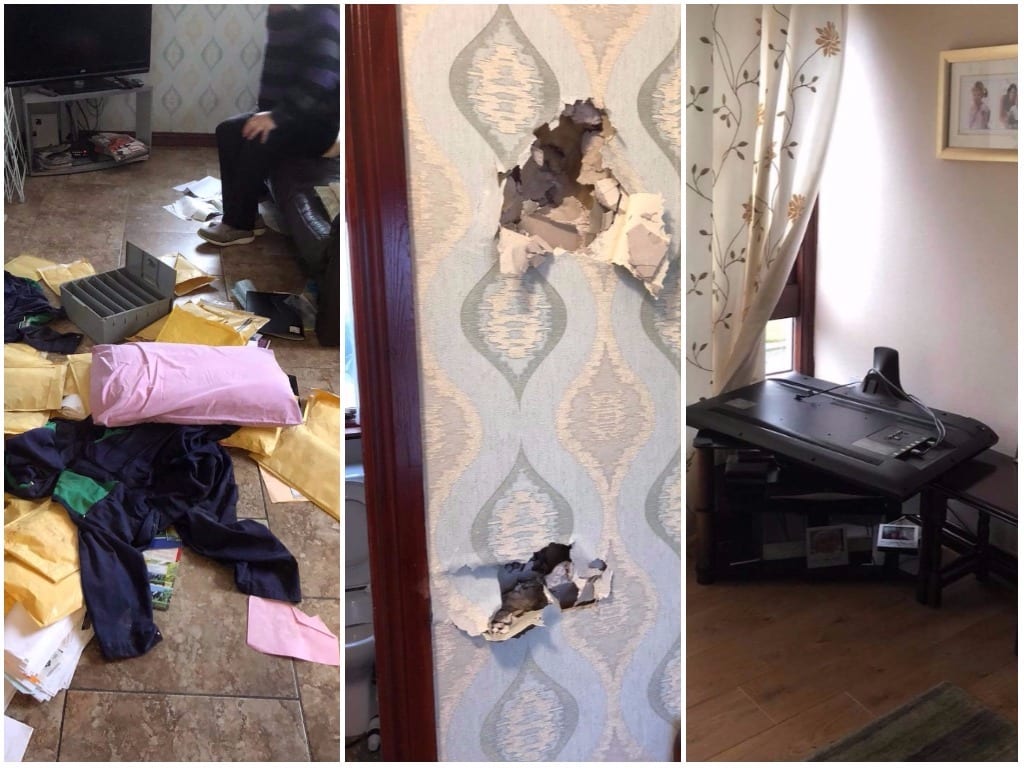 A woman whose house was burgled during a 15-minute rampage on Wednesday night has hit out and slammed those responsible as “scum of the earth”.

Mary Montgomery from the Ratarnet Road in Hamiltonsbawn says her husband had just popped out of the house to help an elderly neighbour when the opportunist thieves struck.

Mary herself was away just half an hour, only to come back and find her precious – and sentimental – jewellery had been raided from the family home.

Among the items taken were her engagement and wedding rings as well as items inherited from her mother.

Speaking to Armagh I, Mrs Montgomery says she doesn’t know how she’s going to get over the burglary.

“It’s not nice but we’re still living, they didn’t touch us so we have a lot to be thankful for,” she said.

“One of the neighbour’s alarm had gone off; he is a wee old man, so Wilbert was going over to put that off.

“I left the house at 6.30pm and Wilbert about five minutes after that. He dropped the grandson up to my daughter’s and went over to the neighbour’s house to sort the alarm.

“He was back over at the house again by 6.55pm, so they had been in and out in that short time period, no more than 15 minutes.”

She continued: “I was home just a few minutes after Wilbert came back. When I pulled up he was standing out in the yard on the phone.

“My initial thoughts were that something had happened our little grandson, so I jumped out and asked him ‘what’s wrong’ and that’s when he told me we had been burgled.”

Mrs Montgomery explained how the burglars systematically went through the house, one room at a time.

“They seemed to have been working their way down the left-hand side and working up the right,” she said. “There was money sitting in one of the rooms, which they haven’t taken, so I’m assuming they have spotted Wilbert coming back and made a quick getaway.

“We have three entrances in our house so I’m guessing that’s what happened.”

The thieves broke through a window at the front of the house before wrecking everything in their paths as they looted the house.

“You come into a house that is completely ransacked, what do you think, it’s just hits you,” she said.

“They’ve taken jewellery and money, that I can see of anyway, but it’s the sentimental value. My mum didn’t have a lot of jewellery but the bits and pieces she had, I inherited.

“My good wedding and engagement rings have all been taken. These are things that can’t be replaced. It’s just not nice knowing someone has been through your personal stuff. Trying to clean up the mess is another job we’ve had to do.”

It has since been confirmed that another house close by was robbed last night.

“Yeh, someone was robbed on up the road close to Redrock – those people are away on holiday. These people who did this are scum of the earth.”

She added: “I don’t consider myself old but I keep thinking, an old person say, in their eighties or nineties, and someone like that coming in and ransacking their house, how do they ever get over that?

“I work in the evenings and I’m in and out all the time – I have no set hours. I was only away half an hour last night – in and out of Armagh – but those who burgled the house wouldn’t have known that.

“Wilbert goes to bowls a few nights a week but it’s not the same nights each week, we don’t have a regular pattern but they must have had it sussed out.

“If you see what wrecking and damage they’ve done in such a short time, it doesn’t even bear thinking about what would have happened had they longer in the house.

“Those boys must have been very professional. They knew where they were looking for the stuff. They’ve even left the jewellery that was pretty much worthless – they’ve come in and made off with the good stuff.”

Despite the setback, Mary says a strong support network is helping her deal with the ordeal.

“I have such great support now from a wonderful family, friends and neighbours around me. We will get over it; it’s gone but I’m not at all hopeful of ever seeing my jewellery again.

“I don’t blame the police at all because how do you stop boys like that. The police can’t be everywhere.

“It’s about being more vigilant as a community. I would be one of these people that if I saw a suspicious van I’d take down the number plate and have even reported vans in the past. I would be vigilant but it’s probably a case of being extra vigilant.”

“It’s done now, we just have to move on with things.”