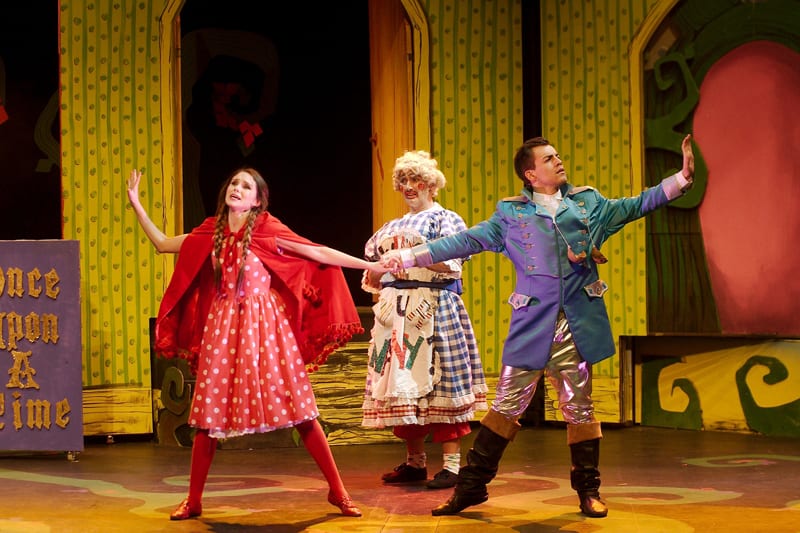 The panto itself is an adaptation of the modern day fairy tale, and focuses on Little Red Riding Hood’s journey through a large forest to her sick grandmother’s house. Accompanying her along the way is her other grandmother, the hilarious Nanny No Hood, who quickly becomes a favourite with the audience.

Several other much loved fairytale characters, including the three little pigs, Hansel and Gretel, the Wicked Witch and Goldilocks get involved along the way, further enhancing the storyline.

The big bad wolf really brings about plenty of interaction with the children in the audience as they relentlessly booed his every move.

Cast members come out into the audience to interact with the children, which was thoroughly enjoyed by all.

Should you be attending the panto for a special occasion such as a birthday, requests can be made for the cast to shout out messages to you in the audience. This was a really nice touch. A special mention to the venue itself which was as equally as impressive as the play.

They have set up photo competition which allows children and adults to dress up using little red riding hood costume props with an impressive forest backdrop.

Some more Christmas themed backdrops provide an opportunity for some lovely photos. The theatre itself has a very personal feel to it with great views, you do not feel too distant from the stage. After the play there is a meet and greet session with the cast allowing for more opportunities for some brilliant photos and a chance to appreciate the impressive make up and costumes up close.

In summary, Little Red Riding Hood is a must see for any family with young kids but can also be enjoyed by all ages. It is an all singing, dancing, funny and energetic production right on your door step and would be a shame for it to be missed.