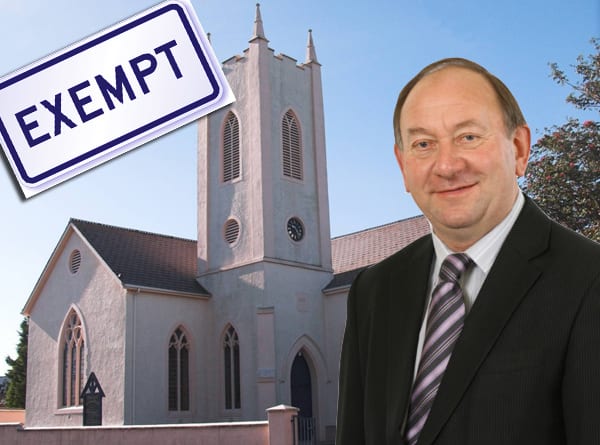 Environment Minister Mark H Durkan has promised to look at the matter now – before the end of the current Assembly – at the request of Newry and Armagh DUP MLA William Irwin.

Minister Durkan confirmed that, under current planning fees regulations, a fee is not payable for a number of types of application for planning permission. William Irwin MLA has asked for churches and all charitable organisations to exempt from planning fees.

He told the Assembly: “The exemptions that he referred to are available for clubs, societies and other organisations where the club, society or organisation is not established or conducted for profit; where the application relates to the provision of community facilities, including sports grounds and playing fields; and where the planning authority is satisfied that the development is to be carried out on land that is, or is intended to be, occupied by the club, society or other organisation and to be used wholly for the carrying out of its objectives.”

Mr Durkan said he felt his waiving of planning fees for “those types of organisations and that type of activity was a good move” and added: “It can only benefit the community as a whole and has proved successful to date.”

But the Minister confirmed to Mr Irwin that there was “an anomaly”, in that the churches had not been included to date.

He gave his promise: “I will strive to correct that between now and the end of my tenure.”

Minister Durkan agreed, at the insistence of the DUP Assemblyman, to look “as soon as possible” at the matter.

He offered assurances that he was “not just fobbing him (Mr Irwin) off” and revealed that he was this week tasking officials in the Department of Environment to take forward a “formal review to consider options for extending the existing fee exemption to churches and to look more closely at the issues involved”.

Mr Durkan said he did so after a number of representations on the current fee exemption for applications for planning permission for not-for-profit clubs etc.

He added: “I have sought legal advice on the matter previously, and the advice of the Departmental Solicitor’s Office has been that, as it is, churches are not included. That is not my reading of it.

“I had a recent meeting with the chief executives of all the councils, who now have responsibility for the vast majority of planning applications, and I have asked them to seek their own legal advice on the issue.

“I believe that it is an anomaly and that we can iron it out.”