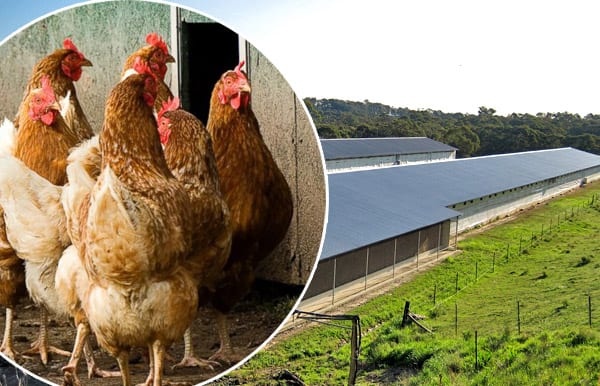 A major new poultry house will be built on the edge of the city, Armagh I can reveal.

Planners have given the thumbs up for the construction a large free-range hen house with a capacity for 8,000 birds on the outskirts of Armagh.

The plans will include an egg packaging store on the Ballynahonemore Road site, which will be situated directly behind Armagh City FC’s Holm Park ground, to the west of the city.

The 12,000m2 development has taken over a year to be given the green light.

Plans were submitted by the applicant Mark Starrett in June 2015 but were only passed by planners earlier this month.

Clarification has been given in relation to the amount of manure which will be produced.

The agent for the development is local Ulster Unionist Councillor Sam Nicholson, of da Architects in Armagh.

In a letter, he informs planning officials that 328 tonnes of litter will be produced ‘per crop’.

And the applicant would enter into a five-year contract with Gilfresh Produce in Loughgall, which will receive the manure for use in its on-site anaerobic digester.

The proposal is described by a planning official as “substantial in terms of scale”.

This latest development follows on from the construction of three new broiler poultry sheds – housing up to 105,000 birds – on the Battleford Road.

Those plans got the go-ahead in November despite several objections from residents at the time.