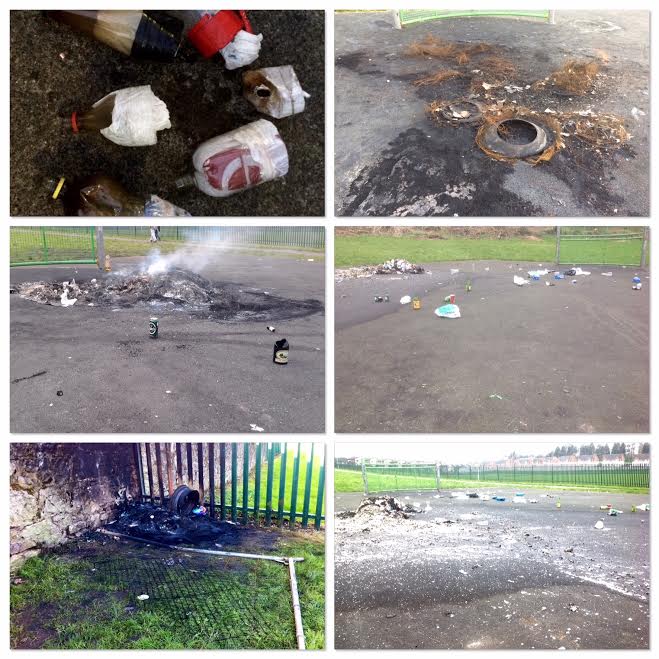 Calls have gone out to parents to know where their children are amid claims that some are actually dropping their young people off at Sherry’s Field for parties which have escalated into extreme anti-social behaviour.

Yesterday, (Wednesday), Armagh I reported that the PSNI had stepped up patrols and were monitoring the situation.

At the same time, the West Armagh Consortium released images of the damage which is being caused.

For the past number of years the problem has been going up but the anti-social behaviour and vandalism has spirralled out of control and residents are at their wits’ end.

A spokesperson for the WAC said: “Weekend parties lasting into the early hours, underage drinking, drug taking and drug sellers, destruction of property, increased noise levels and physical attacks are a regular fact of life in this area.”

But they said there were others who had a part to play in helping to ease the sitution.

The spokesperson added: “Another disturbing aspect of this situation is that some parents are, at best, displaying a complete lack of knowledge of the actions of their children or, at worst, a complete disregard for the people of the area who are bearing the brunt of these ‘weekly parties’.

“Local residents have spoken with dismay at instances when the teenagers are being dropped off at this location either by a parent or an older sibling.

“It should be pointed out that residents and community representatives do not claim that this is the norm, but still wonder what some parents think their teenage sons and daughters are getting up to in this area at such late night parties.”

The spokesperson added: “What has clearly emerged is that this problem is one that cannot be solved without a combined approach by the community, statutory bodies and police authority.

“For the local residents of Callan Street, Convent Road, Cathedral Road, Edward Street and people who use the community facilities at Sherrys Field, a solution cannot come quickly enough.”