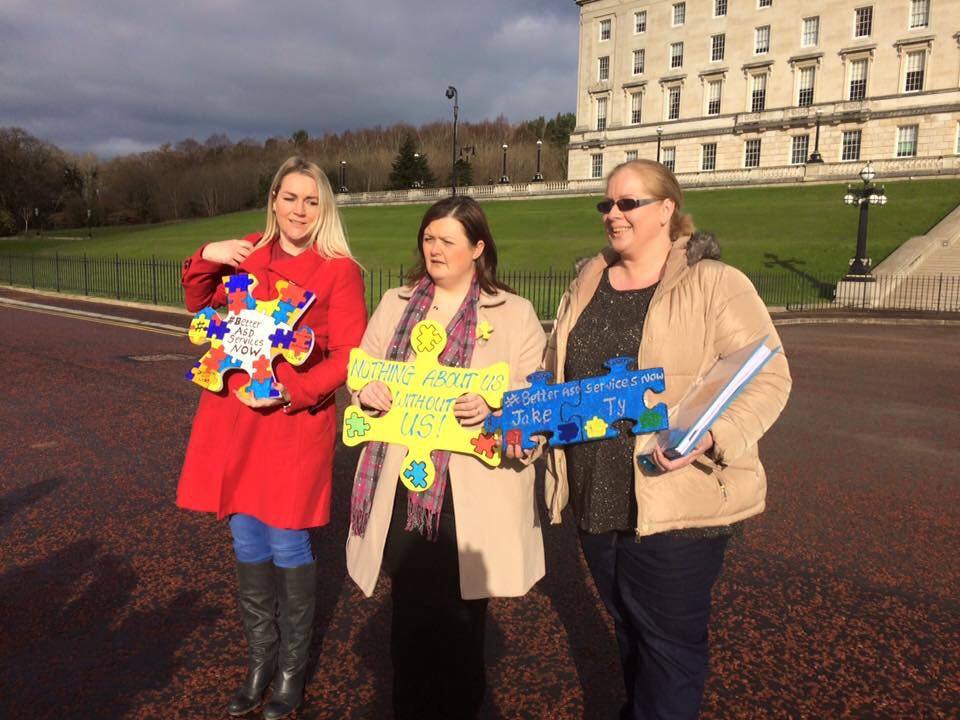 “All children with autism must be treated as equal citizens and must have equal access to rights and opportunities, which have to be protected and enforced.”

Those were the words – simply put – of Alliance Party MLA Kieran McCarthy as he took charge of handing over the petition at Stormont demanding action to reduce waiting lists for autism assessment.

The Strangford MLA was watched from the public gallery in the Assembly by parents and their supporters.

Almost 300 children across Northern Ireland have been waiting for more than a year for an assessment. Three of the organisers behind the protest, Sinead Mcmullan, Lorraine Carrothers and Jill McCann

And on Sunday, Health Minister Simon Hamilton announced a recurrent £2 million a year in funding to tackle this.

It will lead to the creation of 35 new posts Provincewide tasked with improving the efficiency of diagnosis and reducing the waits faced by families here.

But parents proceeded with their planned protest and handed over the petition, proving they mean business and will not give up until the situation improves.

Annaghmore mum Emma Manton, whose six-year-old son Thomas is one of those who had been waiting on a long overdue assessment, described the turnout and support at Stormont yesterday as “fantastic”.

In presenting the petition, Mr McCarthy said:”My petition pleads with the Health Minister and the Education Minister for much better care for children with autism spectrum disorder (ASD).

“Of course, those children grow into adults and continue to need that special attention. The increasing number of children with autism who are being forced to wait 20 months and longer for assessment and statements, and the further delay in specialist care and educational support, is pretty scandalous. It is simply not good enough.

“As this is the final petition that I will present to you in the Chamber, Mr Speaker, and having had personal family experience of a child, now an adult, requiring special needs provision, I am extremely passionate and totally committed to the Assembly delivering on the Autism Act 2011.

“The last thing that a parent needs after a child’s diagnosis is to have to spend time running around Departments looking for help.

“I appeal to both Ministers to act immediately and help all children with autism; indeed, both children and adults with autism.

“I am extremely proud, along with other MLAs, to have served for many years on the all-party group on autism here at Stormont under, I may say, the excellent chairmanship of Dominic Bradley, who is in the Chamber with us. Along with Autism NI, the National Autistic Society and other parent groups, we assist, inform and help parents.

“We have championed the Autism Act 2011, which was new legislation to end the desperate waiting and uncertainty for parents. I have to say that progress has been very slow since 2011, and that has given rise to frustration, anxiety and, sometimes, total breakdown.

“Our petition is begging for swift enactment of the legislation, the autism strategy and, indeed, the action plan. All children with autism must be treated as equal citizens and must have equal access to rights and opportunities, which have to be protected and enforced.”

The petition handed over contained 8,271 signatures and Mr McCarthy said many, who were present at the presentation, had included “heart-stopping comments” alongside their names.

He continued: “I pay tribute to all the parents and friends who have faced lengthy delays and waits. Their expectation in signing this petition has to be realised, and the Assembly, which is their Assembly, must deliver now.

“I acknowledge that the Special Educational Needs and Disability Bill is going through Stormont at present, and I also acknowledge the positive nature of the health board, the Public Health Agency and the early support team in each trust, but action speaks louder than words.

“In conclusion, the 130% increase in calls for help to the Autism Northern Ireland helpline indicates a huge problem for us all. It is no wonder that parents are crying out for help and guidance.

“Let all Ministers hear that cry for help, play their part and end the nightmare for children with ASD and their parents now.”

Two separate copies of the petition were brought to the Assembly – one for Health Minister Simon Hamilton and the other for Education Minister John O’Dowd.

The Speaker, Mitchel McLaughlin, congratulated Mr McCarthy and all who had helped compiled the petition, and gave assurances it would be forwarded to both Ministers.