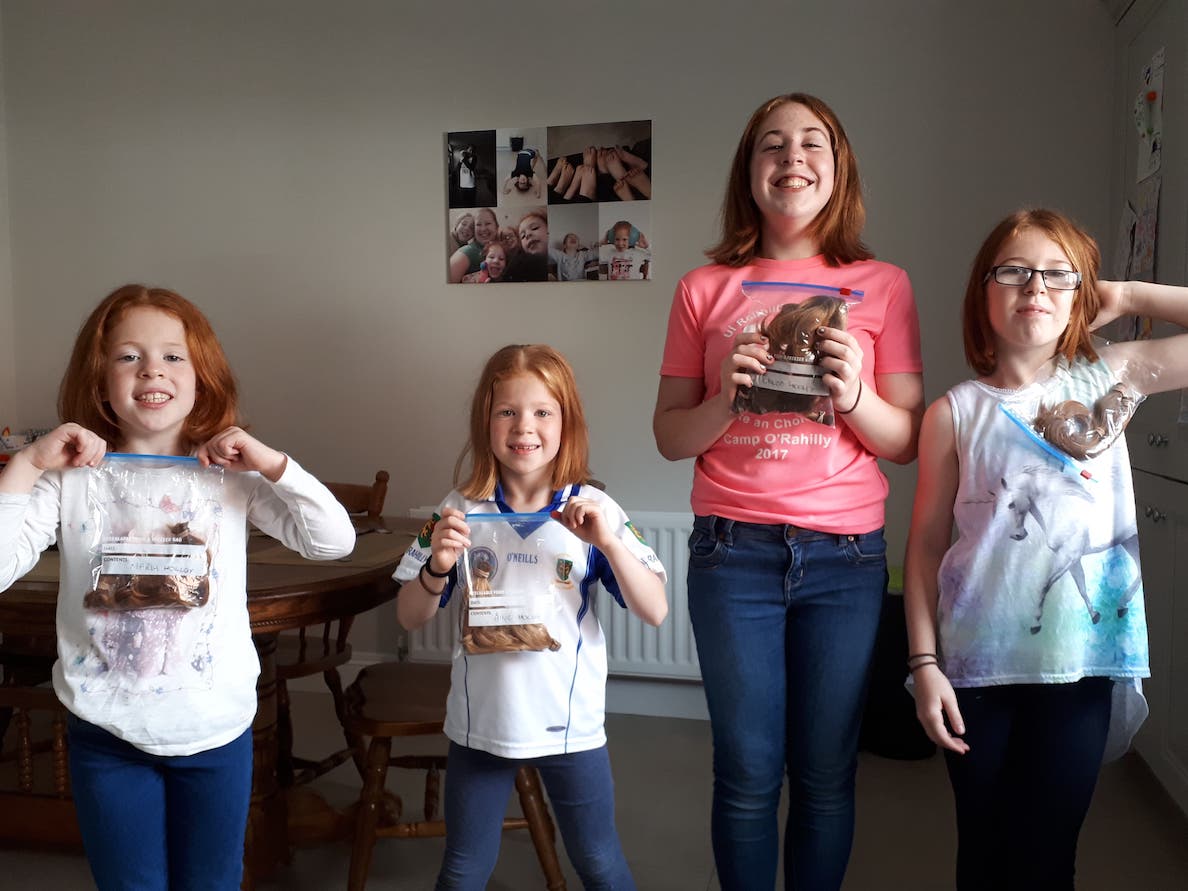 Four Co Armagh sisters have bravely donated more than a metre of their hair between them to The Little Princess Trust.

Chloe (13), Aoifé (10), Maria (7) and Áine (7) Molloy, from Collegelands, decided to do their bit for the charity having seen first hand the awful affects of cancer.

Their gorgeous flowing red locks – all 105cm of it – will go towards making free wigs for sick children who have unfortunately lost their own because of cancer treatment and other illnesses.

And mum Simone couldn’t be more proud of her four daughters for their selfless gesture.

“They were so proud to be able to help, and I’m so proud of them too,” Simone told Armagh I.

“In our family so many people have been affected by cancer,” Simone explained. “The girls have seen what that does; the most obvious part being the hair loss from cancer treatments.”

“We then spoke about how illness happens to everyone, young and old, and how other illnesses can cause hair loss.”

She added: “I have a friend who’s daughter lost her hair due to Bechet’s disease. She is the same age as my twins (Maria and Áine) and I’ve known her mum since 2010.

“I talked to the girls about how people can donate hair to give to the Little Princess Trust, so they can give these boys and girls a free wig out of real hair, so it looks and feels real.

“They were moved by the fact that these children could be given such a special gift, and said they would like to help too by donating. At that point their hair wasn’t long enough, so we agreed to wait until it was and then everyone could get theirs cut at the same time.”

At the time the four girls got their locks chopped, mum Simone admits she couldn’t quite measure up to her daughters standards.

However, with a little patience she will be cutting her hair in a fortnight’s time.

Simone adds” “The girls have been keeping their hair in such good condition throughout the months waiting, so that they could donate the best possible hair. I am just so proud of their effort and hopefully it makes some other children happy.”

To find out more about The Little Princess Trust click here.