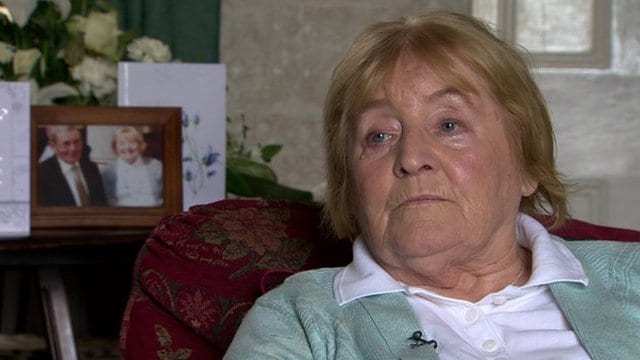 A Milford pensioner has made a fresh appeal for the return of a ring which was stolen from her home as she laid her husband to rest.

It is eight weeks since Muriel Diffin attended the funeral of Espie, her husband of 52 years.

A gold ring with a red stone was taken during a burglary at her home, along with a large sum of cash, credit card and various items of jewellery.

But it is this one item which can never be replaced.

Appeals to those who took the ring to do the decent thing have so far gone unheeded.

The community has rallied round in support of Muriel and even gathered together a reward – which still stands.

A mobile telephone number was provided but there have been no calls.

Today Muriel revealed how she is struggling to cope on her own.

She told the Belfast Telegraph newspaper: “Having Espie’s wedding ring would bring me some comfort. I haven’t stopped crying since he died. Every time somebody mentions his name I cry. I feel so bad.

“Please just give me the ring back. I don’t care about the money or anything else, please, please bring back the ring.

“The police have been very good to me and very helpful. The officers said they would contact me personally as soon as there was any news. Unfortunately the ring hasn’t turned up.

“I know I need to get on with things but it is very hard. We were married for a long time, he was my life and now he is gone. And so is his ring.”

The appeal for the return of the ring was shared widely on social media and television crews took up the story.

A spokesperson, speaking after the robbery, told Armagh I, a reward had been offered in the hope of getting the ring back.

He said: “Someone may have came across the ring on the street. Not for one moment if we receive a call will we think it is the person who stolen it; the robber probably has seen of how little value it is worth and threw it away, but if anyone has found it call us on 07860611179.

“We won’t ask where it was found, how it was found, nothing at all, we don’t even have to speak just exchange the ring for the reward.

“To be truthful I will be too emotional to speak anyway, I will just be so happy to see the ring and be able to return it to Muriel.

“Or if the robber is reading his and has a guilty mind – and they do not want to meet to return the ring – send it in the post to ‘The Old School House, 68 Hill Street, Milford, Armagh, BT603PB’ or drop it through the letterbox of the house you robbed.”