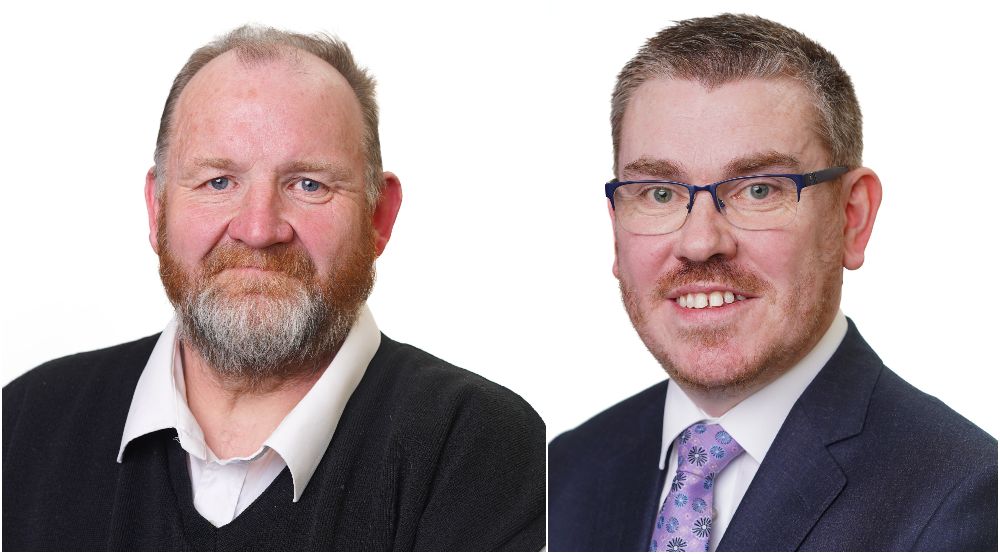 Two new councillors have been welcomed to Armagh City, Banbridge and Craigavon Borough Council during their first meeting in the chamber.

With former elected representatives Paul Rankin of the DUP, co-opted by the party to be MLA for Lagan Valley and Sinn Fein’s Garath Keating stepping back from politics, there were two seats vacant on the council which have now been filled by Councillors Keith Parke and Fergal Donnelly respectively.

Welcoming Councillor Parke to the chamber, Council’s Lord Mayor, Alderman Glenn Barr wished him well and said: “Hopefully you enjoy yourself in the cut and thrust here”.

Addressing the chamber, Cllr Parke thanked the Lord Mayor for his words of welcome and paid tribute to Alderman Paul Rankin for his efforts during his time on Council.

“Alderman Rankin has done fantastic work down through the years for the people of Lagan River and I also want to thank my party for nominating me to be co-opted onto the council,” said Cllr Parke.

“I look forward to my time here and I would like to thank Almighty God that I have been given this opportunity to serve here and serve the people of Lagan River and I look forward to learning from my colleagues and those in the chamber.”

DUP group leader, Councillor Mark Baxter welcomed Cllr Parke to the council, telling the chamber he is a fount of knowledge who now lives on the right side of the mountain.

“I just want to welcome Cllr Parke to Council he is no stranger to us in the DUP and is a fount of knowledge when it comes to local politics and statistics and all that side of party politics.

“Originally from Kilkeel, he now lives on the right side of the mountain and we get on very well. He has some sense, he is a Liverpool supporter after all so all that is very positive.”

The Lord Mayor then took the opportunity to welcome Councillor Fergal Donnelly, the man chosen by Sinn Fein to replace its former Armagh city councillor, Garath Keating, to the chamber.

“I also want to welcome another new councillor and that is Councillor Fergal Donnelly,” said the Lord Mayor.

“Councillor Donnelly you are very much welcome to the fold.”

Addressing the chamber, Cllr Donnelly extended his thanks to his cumann for selecting him and said he looked forward to working with everyone in the chamber.

“I would just like to thank my cumann for putting me forward to replace Garath Keating who did such good work here and I will look forward to working with all the councils here in the chamber,” he said.