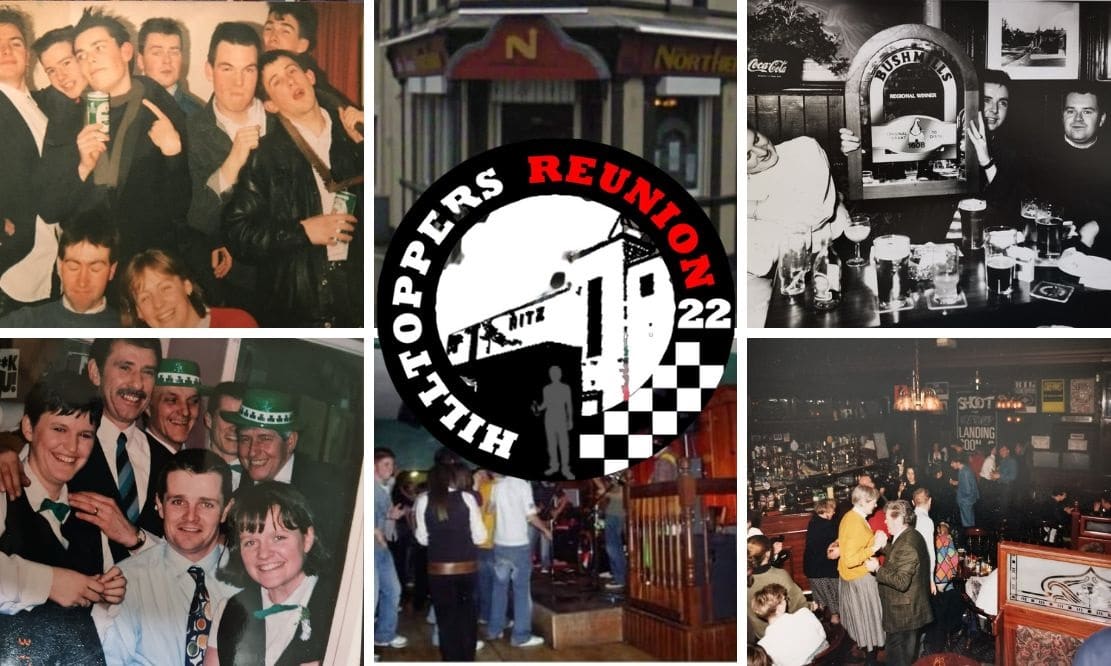 A group of friends who grew up in Armagh in the late 80s/early 90s have got back together to host a reunion night to pay tribute to the old bars and clubs of their youth.

The “Hilltopper’s Reunion 2022”, is set to take place in Armagh Theatre on October 1, as a celebration of the Armagh nightlife scene of yesteryear, featuring renowned bands and DJs bringing the nostalgia of the 80s and 90s back for one night.

The “Hilltop” in Armagh – at the old cinema where the Marketplace Theatre now stands – is where the “Hilltoppers” derived their name from and acted as the hub for nights out in the city in an age before the Internet and mobile phones.

“It was the late 80s/early 90s, and we were an all-inclusive group”, says Mark Reilly, a former “Hilltopper” and one of the brains behind the upcoming event.

“We didn’t care who you were or what you were. We were all friends. Times were hard then. Financially, it was really, really tight, and the Troubles were going strong. The Hilltop was all about friendship and crossing communities and boundaries.”

The Hilltop served as the meeting place for four much-loved venues, Drumsill, the Chestnut Lodge, the Northern Bar and Glencoe Bar (Charlie McMahon’s).

Mark and Conor Reilly, Eugene McGrath, Paul Quinn, Connell Daly and Vinnie McCann, who remember these years fondly, all decided to get together to organise a reunion night to relive the happy memories.

Much like it was back in the day, Mark says everyone is welcome to the event – “Hilltopper” or not.

“The night is all about catching up and remembering good times, but also to remember some people who have passed away, including in recent times during the pandemic, such as Keith Kelly, “Nipper” Knipe and Joanne McGinn.”

The event will be a non-ticketed free event for anybody over the age of 18, and all are invited to attend.

The night will be kicked off in the Studio Theatre by ‘Little Wilgar and the Crackpot Preachers’. The Blues band will be performing from 7.30pm to 9.30pm, followed by DJ sets in the main bar and foyer.

The event will feature DJs from Armagh, such as DJ Rossi (JP McCusker), of Greatest Hits Radio fame, who will be performing 80s and 90s music, and Andy Leathem, who is renowned in the Belfast scene. He is a former resident DJ of Lavery’s in Belfast and will be playing Northern Soul, Ska, Mod and Dance music.

Tributes will also be paid to the late Tony Hughes. Donation boxes will be available on the night for the Armagh Outreach Team. A charity that Tony had close to his heart.

“We’re just looking back fondly on how difficult times were, but also at how good they were”, says Mark.

“People got on with things, friendship was the main thing and enjoying yourself was a priority. Friendship and fun were priorities at the time for us. Even though things were difficult and challenging.

Mark is keen to stress the inclusivity of the event, with all from inside and outside that era welcome on the night, to pay tribute to the good times that were had in those years.

“Also a note of thanks to Vinnie McCann and Oliver from Marketplace Theatre”, he added.