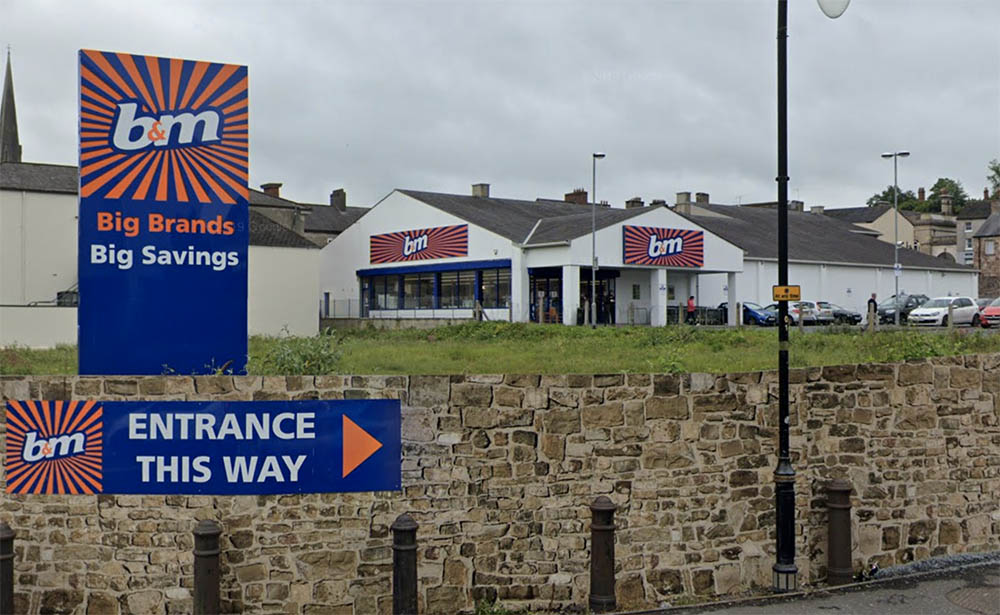 A major retail development at a derelict site on the Lonsdale Road in Armagh has been given the go-ahead.

Council planners have this week given the thumbs for the extension to the B&M Bargains site, which will include an additional retail unit and a coffee shop.

It comes 20 years after permission was given to develop the site on which B&M Bargains now sits.

Originally Aldi, Poundstretcher and Iceland were to come to the prominent location with three stores being built.

However, only one – for Aldi – was completed and then, when it failed to move in, B&M Bargains later became the tenant.

Much of the site remains undeveloped but that is about to change.

Gone will be ‘informative’ surround hiding a derelict plot of land from view of Lonsdale Road, with B&M tucked behind.

Instead, the plans will see the B&M Bargains store become one of the discount retailers biggest outlets in Northern Ireland.

And in addition to that, there are plans to build a new coffee shop on site. And a third shop – for an as yet unspecified tenant – is also proposed.

The extension to B&M Bargains will be accommodated on the existing car parking area within the site.

The other two units will be to the Lonsdale Road side and to the rear of the existing church hall property. One will be up against the gable end of B&M Bargains with the other adjoining and overlooking Lonsdale Street – directly across from Armagh Courthouse.

It is labelled on the submission as “vacant lands within Armagh central core”, for which planning approval has previously been given almost 20 years ago for retail purposes.

A transport survey indicates 84 car parking spaces will be available which should “adequately service” the new development, with additional on street parking and public car park close by.

Both the coffee shop and new retail unit would stretch to 1,250 sq ft each.

In all, the collective retail floor space now will be close to 1,200 sq ft more than that intended when plans were first approved for the trio of household names back in 2002. A design and access statement explains: “The external design of the extension has taken account of the site’s surrounding historic context, with careful consideration given to the surrounding buildings, to ensure the extension complements the scales and proportions of both these and the existing unit.

“By doing so, we consider the extension presents a uniform and consistent design which negates and potential adverse impacts on the Conservation Area and surrounding Listed Buildings.”

It says the plans represent an “appropriate retail proposal” for the site.

The statement adds: “This is geared towards meeting the needs and improving the offer of the existing B&M Bargains store, and also makes provision for smaller retail and coffee units, with appropriate car parking and servicing arrangements to support the development.”

The application, which was lodged in the name of Huntley Developments Ltd., was granted permission by Armagh City, Banbridge and Craigavon Borough Council.