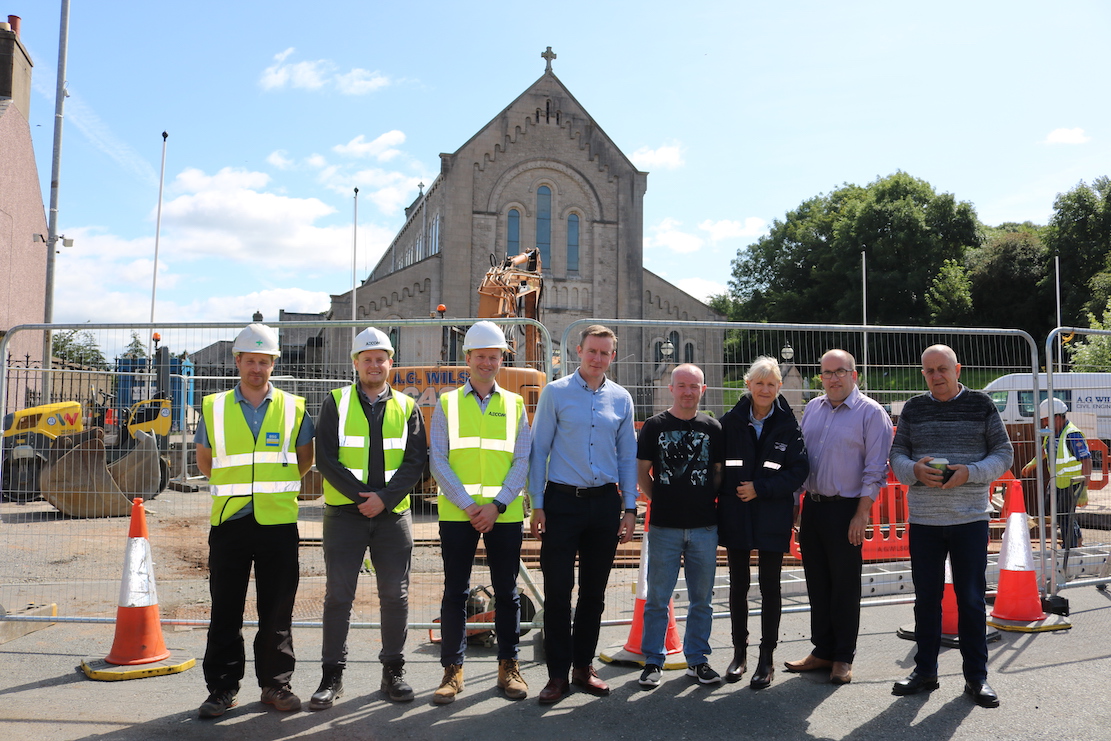 Single lane traffic flow will be introduced to Irish Street in Armagh after businesses complained of how the works and lack of consultation was affecting their trade.

The road had been due to be closed for the remainder of the month but it looks like NI Water will introduce single lane traffic management from Monday which is expected to last a week.

Armagh MLA Justin McNulty met with representatives of NI Water and the contractor on site this morning (Thursday).

Following that meeting, Mr McNulty said: “Anyone who has tried to navigate their way through Armagh, especially from the Keady, Monaghan and Killylea Road over recent weeks will only be too aware of the disruption caused by the ongoing works at Irish Street.

“The works by NI Water are part of a much needed investment in the city’s sewerage infrastructure and I and locals on the ground warmly welcome the investment.

“I met with representatives of NI Water and their contractors on site this morning to discuss a range of issues, including the disruption to traffic, businesses and residents.

“NI Water fully acknowledged the disruption caused and are committed to getting the works completed as soon as possible.

“Thankfully that will see an end to the complete closure of Irish Street with the introduction of single lane traffic management from Monday which is expected to last a week. This will see works move to the slip road up to the Killylea Road and traffic will be reduced to a single lane on the slip road.”

He added: “In an effort to expedite things further, the contractor will be increasing their working hours to 12 hour shifts with work now commencing at 7am each morning.

“We asked about the possibility of working through the night, but this was not possible with the dangerous nature of the work involved and the fact that this is a residential area.

“This scheme is vital for Armagh and during our time with NI Water this morning, we also took the opportunity to address some of the concerns of local businesses and the impact on their livelihoods during the works.

“NI Water have agreed to improve communications with the residents and businesses in the area.”

In addition to the concerns raised by local businesses, NI Water met with representatives of Friends of the Callan River and brought them up to speed with the impact of the work on the Callan River.

It is hoped that the works will complement the work the Friends of the Callan are doing to protect the ecology and natural environment of the Callan.

These works will build in additional environmental protections for the river and we hope this will see a vast reduction in any pollution incidents caused by the ageing sewerage infrastructure.

“I want to place on record my sincere thanks to NI Water, not just for the £1.4million investment into the sewerage network as part of this scheme, but for coming down and meeting local business and community representatives,” Mr McNulty commented.

“I know the scheme will be much welcomed when complete, especially by those residents in the Drelincourt, Navan Manor and Navan Street who have suffered flooding in recent years.

“I appreciate that a scheme of this size cannot happen without disruption, however it is hoped that the vast majority of the works will be completed before the schools return in a few weeks’ time.”