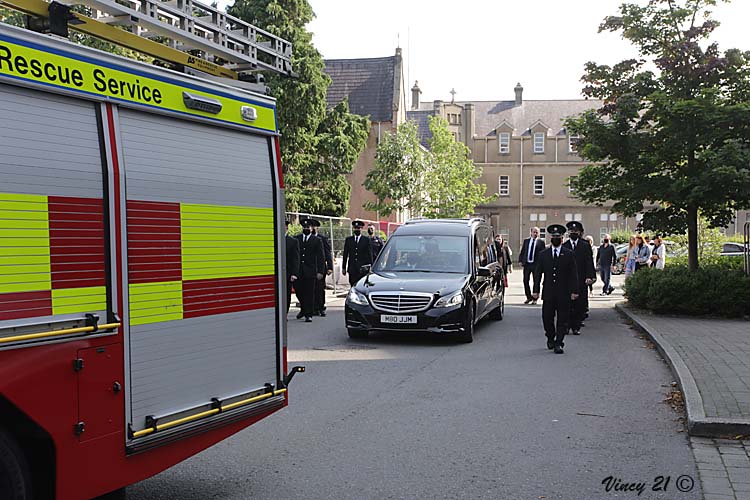 An Armagh man who gave over three decades of loyal service to the NI Fire and Rescue was given a guard of honour by his former colleagues as he made his final journey through the city he called his home.

Mourners at his Requiem Mass at St Patrick’s Cathedral on Monday heard how “there was a great sense of shock here in the community on Friday morning when the news filtered about Brian’s passing and many people were saddened to hear of the death of someone so young and someone who was well liked and well regarded here in the community”.

Fr Peter McAnenly explained how, through his work, Brian “got to know many and many got to know him and over the years, he built up a great network of friends”.

Brian was the youngest of a family of five, the son of the late Benny and Josephine Hamilton and he was brought up in the family home on Bambrook.

He went to the old Bambrook Primary School and then to the Christian Brothers and after he left school, he went straight into the world of work. He began back in 1979 working for the Civil Service and he worked there up and until a couple of years ago.

He worked for many years in the Department of Agriculture and he was based for some time out in Loughgall but for many years and he worked in Belfast.

Brian also worked in the Jobs and Benefits office and so over the years and Brian gave 40 years of service as a civil servant.

Fr McAnenly continued: “He also worked of course with the local fire service as did his father before him and then his late son Gary also followed in their footsteps and I believe the three of them, they gave 65 years of wonderful service.

“Brian himself gave 34 years of service and he retired as Watch Commander just a short time ago and how fitting it is to see many of his former colleagues turn out to pay tribute to him this morning.

“And I’m sure that many stories could be told from over the years when Brian worked as fire officer, up and down ladders at house fires, being called out to road traffic accidents and so on…giving his life as a front
line worker and such selfless and yet very necessary work.

“I was speaking to one of Brian’s colleagues on Friday and he talked at length about the great fire officer that he was and he said that if there was anything you wanted to know about the job, Brian was the man to go to. “He talked about the great instructor and the very natural leader that he was and he went on to say that when Brian was going out on an RTC, you could have had absolute confidence in him and for Brian, it wasn’t just a job but it was his vocation and a vocation that he loved and was totally dedicated to and his was a life that was very much lived in the service of others.

“Most recently and he had taken up a new job and it was very much focused on fire safety and Brian was enjoying it, doing risk assessments and so on and again in and through his long years of service with the fire department, he made many connections and many wonderful friends.

“But besides his work, Brian was first and foremost a great family man, he was a good husband and father to both Gary and Clare, he was a much loved brother and a dear friend to many. On the top of his coffin over the last few days and there were many pictures taken at different family events over the years and each of them told their own story of what family meant to him and he loved the family events and the family occasions.

“As some of the family said the other day, he loved the social gatherings and he enjoyed a good party and thankfully there are great memories of wonderful times that were shared with him over the years of his life. He also loved his wee breaks and getting away now and again for a weekend to different parts of the country.

“Like all of us and he had different interests and hobbies, I believe he was a great Leeds supporter and he also had a great interest in horse racing and he enjoyed having a wee flutter on the horses at weekends. He was also very technical and he enjoyed gadgets; he enjoyed the challenge of having to fix things and learning how to use new gadgets always interested him and was a source of great enjoyment for him. “The last few years has been a trying time for Brian and the wider family with the loss of Gary just over three years ago and then the loss of two of his sisters more recently. And the final blow came just a few months ago when he was diagnosed with his illness.

“But he battled on and he kept the head up and he wasn’t a man for complaining but instead he carried the different crosses that he had been given with great dignity. I believe right to the end and he quietly said his Rosaries and offered his own prayers and I’m sure the God who loved him and the God whom Brian loved has now rewarded him for the goodness of his life and granted him a place of eternal peace and happiness in his kingdom.”

Brian was laid to rest in Knockaconey Cemetery.