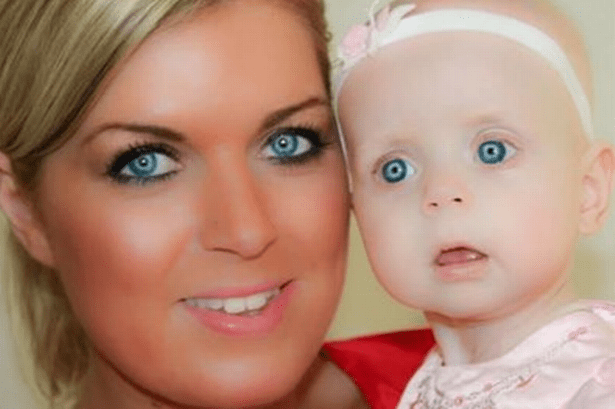 The family of a popular Portadown estate agent who passed away after a short battle against cancer have set up a fundraising page to raise money to help others.

Charlene Campbell, who was a very valued colleague and highly-regarded member of the team at Hannath Estate Agents in Portadown, was widely known throughout County Armagh and beyond.

But the 33-year-old succumbed to breast cancer early last month just over five years after her baby daughter Myla also died at just one year old. Baby Smyla Myla had been diagnosed at two months of age with the extremely rare atypical teratoid rhabdoid tumours (ATRT).

Charlene bravely set up a website to log Myla’s young life and to keep their friends and family aware of the ups and downs of those terrible times.

But when she was diagnosed, the refused the opportunity of conventional treatment and just seven months later lost her own fight against cancer, leaving her family, friends and colleagues devastated.

Charlene, from Portadown, was laid to rest beside her darling daughter after a service in Tandragee  Baptist Church.

Now her family is determined to raise money to help babies and children diagnosed with cancers through their ‘Charlie’s angel fund’.

They have set up a page on justgiving.com in memory of Charlene and her baby daughter Myla who both “very sadly lost their battle to this cruel disease” and hope to raise £10,000.

The family say: “Little Myla was diagnosed with a Rhabdoid tumour at six weeks of age and sadly gained her angel wings aged one years 12 days on the 21st February 2010.

“Sadly her mum, who was the social butterfly of our family, was diagnosed with breast cancer five years after losing her beloved baby girl and joined her angel in heaven on 7th October 2015.” Charlene’s cousin, Mandy Ritchie, said the family wanted to help others after suffering so much themselves.

Speaking to Belfast Live, she said: “That little girl, she was just a baby and yet for so much of her life she knew only pain. That’s at least part of the reason Charlene decided against conventional treatment herself. But she was so adamant that there must be more done to find better ways to treat children suffering from cancer.

“That’s why we are doing what we can to raise money for Cancer Research UK Kids and Teens. It’s what Charlene would have wanted.

“She was such a positive person, really the life and soul, but it’s been so hard to be positive since we lost her.

“We decided, though, that as a family we should do this for her and try and help in any way we can do our but to stop any other family going through the pain we have all seen.”

The family on their justgiving page, urged the public to help, saying: “Please help support us in trying to find kinder treatments for young children and teens as Charlene witnessed the horrors of the gruelling treatments like so many other families.”