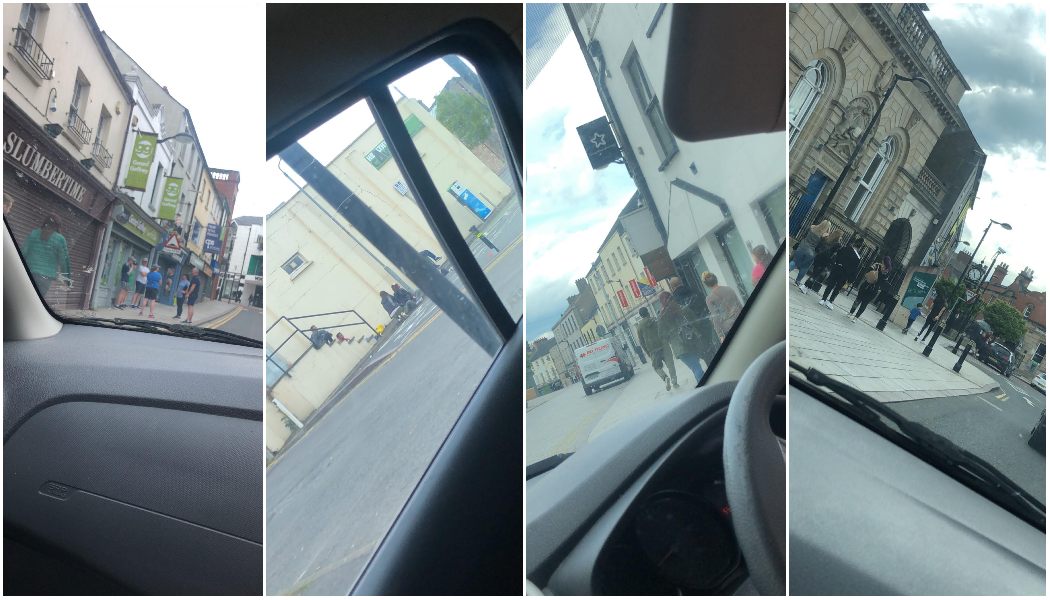 It’s a case of as you were in Armagh just hours after the Northern Ireland Executive announced it was extending the lockdown.

Despite people being told only to venture out for essentials, one Armagh woman said she was disgusted by what she saw in the city centre.

She said: “There were people out drinking and walking in groups around every corner.

“On the Mall people were out sunbathing and playing football. I never saw one police officer.”

The photograph shows the steps at the back of the Gazette Arcade at Linenhall Street. It is an area which is often used by people flouting public drinking bylaws.

Today, people chose not just to flout drinking in public bylaws, they were also flouting regulations on gatherings and social distancing.

The woman, who did not wish to be named, said there were about seven people gathered, openly drinking, when she passed. But a local shopkeeper told her there had been up to 20 earlier in the day.

The local resident said while many shops were following guidelines, she had need to go to one city store and again was shocked.

She added: “I ended up leaving it as wasn’t enforcing social distancing. I even spoke to the manager about it.

“Her staff were climbing over people to empty bins. I work for a local shop also so I know the strict regulations required to open during this period.”

With three more weeks of lockdown many are following the rules and Executive Ministers have praised them for doing so.

But it is clear that still too many are not taking it seriously.

“It was terrible,” added the disgusted local. “They may as well lift lockdown as isn’t being done anyway.”